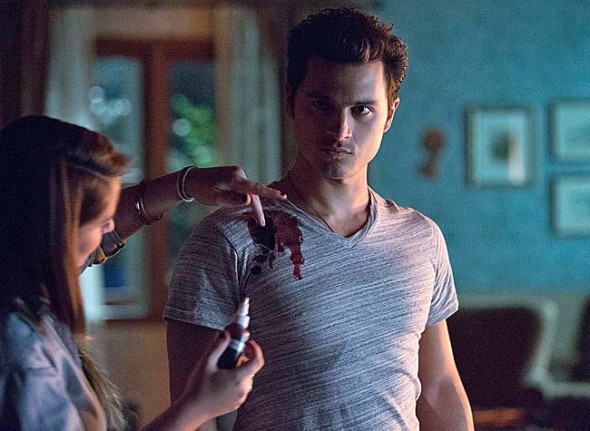 He is a blood-sucking renegade vampire resurrected into a revenge-mad ghost villian after his heart is ripped out.

While this character of Enzo on the CW television network’s “Vampire Diaries” may be macabre, it’s one that actor Michael Malarkey has been dying to play.

The Yellow Springs native is riding high as a reckless vampire on the popular supernatural fantasy horror series that has hundreds of millions of fans around the world glued.

It’s a dream — or perhaps nightmare — come true for the actor who turned stage success in London’s West End into a promising TV and film career, and recently fulfilled a childhood ambition of portraying a vampire.

“Ever since I saw ‘Interview with a Vampire’ as a kid, it was on my bucket list to play a vampire … it gives you free reign to have a little fun,” Malarkey said this week by phone from Los Angeles.

As for the show’s adoring fans, they take to Twitter and Tumblr to dish about its “hottie villain” who debuted as a guest star in late 2013:

“There is an amazing subculture that’s obsessed with this world and to be a part of it is great — you have to embrace it really,” Malarkey said.

The new season of “Vampire Diaries,” which now features Malarkey as a regular cast member, premieres Oct. 2 on the CW, broadcast over the air on Dayton’s WBDT channel 26 and on Time Warner Cable channels 13 and 1013.

Malarkey’s latest role is propelling the 31-year-old Yellow Springs High School graduate to a level of fame he has not seen, but he only landed the role after taking some major career risks, he said.

After critical acclaim for playing the role of Elvis Presley in the 2011 jukebox musical “Million Dollar Quartet” at the Noel Coward Theatre in London, Malarkey, a graduate of the prestigious London Academy of Music and Dramatic Art, was aggressively sought after by musical theater directors. But it wasn’t exactly what he wanted.

“It was a launching pad, but it was a kind of double-edged sword,” said Malarkey of “Million Dollar Quartet.” While he was “completely grateful for the opportunity,” after the show he was “pigeonholed” as a musical actor. Since he doesn’t really like musicals, he swore off auditioning for them entirely — a definite career risk, but one he was willing to take.

“I knew what I wanted to do in my career and would rather have taken the risk,” Malarkey said.

Malarkey, the son of Jim and Nadia Malarkey, then went on to play the lead role of Jay Gatsby in “The Great Gatsby” at Wilton’s Music Hall in London, one of the city’s oldest venues, and performed at the Edinburgh Festival before landing several drama documentaries for television, followed by a recurring role in the 2013 Irish TV mini-series “Raw.”

Malarkey then took another risk — swearing off the stage this time to focus more on TV and film. For one, he was weary of long theater engagements while trying to get more screen experience, while he also found his acting style fit well in the new medium.

“There is this cliché that theater actors are too big for the screen but I found it really easy because I already aim for a more subtle approach,” Malarkey said.
After a few months without work, Malarkey’s second risk seemed to pay off when he was chosen as the lead in a CW pilot called “The Selection.” When that show was not picked up, he stepped up his game, hiring an L.A. manager and sending out about 12 audition tapes a month.

Several auditions for human and vampire roles in “Vampire Diaries” later, Malarkey was thrilled to land the role of Lorenzo, “Enzo,” saying, “If I’m on a show called ‘Vampire Diaries,’ I don’t want to be a human.” Malarkey debuted on season five of the series last December as a bad boy vampire who has a deep past with the show’s lead Damon, played by Ian Somerhalder.

“I tried to kill him and then we rediscovered our bromance, as it were,” Malarkey said.

Enzo, a “renegade, slightly anarchist, snarky, sarcastic British presence” on the show in Malarkey’s words, was a recurring character and appeared in 12 episodes last season. But when Malarkey booked a role on another series, the CW made him a better offer, upping his role to a regular cast member of “Vampire Diaries” in the upcoming season six. Filming for the 22-episode season starts in July and runs through April 2015. While Enzo actually died last season, he came back as a ghost intent on exacting revenge on those who betrayed him.

As for the latest vampire fad, Malarkey said, “they have always been around and there has always been a sick fascination with them” partly because they are “overtly sexual.” (Doting fans, however, may be disappointed to find out that Malarkey is married to British actress Nadine Malarkey). More recently the “Twilight” books and films and the TV show “True Blood” have roused interest in the genre. More than two million U.S. viewers tune in each week to watch new episodes of “Vampire Diaries,” currently the most watched series on the CW network.

With such a busy “Vampire Diaries” filming schedule, Malarkey is now focused on film opportunities, which require less of a time commitment. Malarkey joked that he may now be pigeonholed in a new role — the cliché British bad guy — having lived in London for eight years and picked up a bit of an accent.

“Everybody thinks I’m British over here so they like to put me up for bad guy. But in England, everyone thinks I’m American with a slight weird lilt,” Malarkey said.
And in the latest development in Malarkey’s career, he has picked up the guitar again and started playing live and recording his solo work — one consequence of the “Million Dollar Quartet,” which he said “gave him his confidence back as a musician.” An EP of Malarkey’s music, which he called “folk indie acoustic,” is due out in October. Before embarking on his acting career, Malarkey played in several local bands after graduating from Yellow Springs High School in 2001, including Pawnamia and Dayton hardcore punk band Shadyside.

Whether on the stage or the screen, wielding a guitar or vampire fangs, Malarkey loves putting on an act and the process of “creating something out of nothing,” he said. To Malarkey, his chosen vocation is like a meditation, and helps him transcend the everyday world to reach a higher state of being.

“Acting is like a metaphor for living in the moment,” Malarkey said. “When you’re in that zone and you’re really gelling and bouncing back and forth with someone else, everything else disappears and you get completely detached. It’s the same when you’re jamming with other musicians and connecting with the audience. The more we can all do that with all of our jobs —just be there — the better.”
Fans can follow Michael Malarkey on Twitter @mkmalarkey.