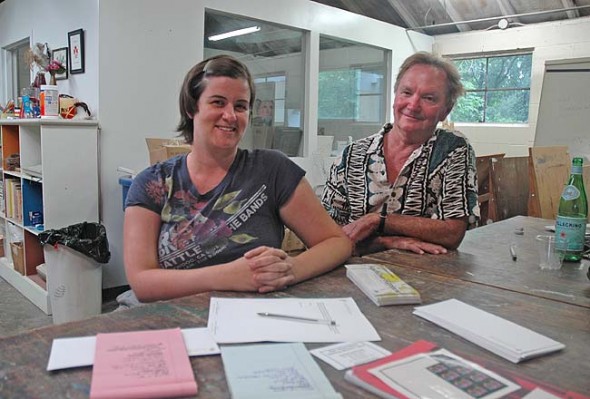 Yellow Springs Kids Playhouse alumna Ara Beal, left, will take the helm of the nonprofit children’s theater company from founder John Fleming after this summer’s production. “Superhuman Happiness,” written and directed by Fleming, runs Thursday–Sunday, July 10–13, and July 17–20, at the Antioch Amphitheatre, 920 Corry St. All shows start at 7:30 p.m. Fleming started the company in 1995 and has led in the roles of executive director and artistic director. (Photo by Megan Bachman)

Fleming, 66, writer and director of “Superhuman Happiness” opening Thursday, said this week he is ready to pass the organization to the next generation and is “elated” that Beal, 34, was selected as his successor by the YSKP board.

Beal looks forward to continuing YSKP’s tradition of producing all original work and working with professional artists to create high-quality theater for audiences of all ages.

This week, Fleming and Beal sat down with the News to discuss the organization’s past and future.

Fleming started YSKP in 1995 when he came to town with his wife, Louise Smith, who headed the Antioch College theater department, and saw the lack of local theater opportunities for youth beyond school plays. Fleming, a mime and actor, had worked in children’s theater in New York City and has always enjoyed, he said, the challenges and joys of mentoring youth. Shows have been a community affair, and Fleming said he is proud to have employed many local artists, musicians, playwrights, set designers and costume designers throughout the years. Fleming also takes pride in the fact that since YSKP’s inception, not one child who tried out for a YSKP show has been turned away, a tradition Beal will continue.

Beal, the daughter of Roger and Kathy Beal, grew up in Yellow Springs and said she got the “theater bug” at age 10 with a local experimental theater troupe working out of the Antioch Theater Building. She worked backstage at YSKP’s first show in 1995 when she was 12 years old and performed in subsequent shows “Harriet the Spy” and “The Oracle’s Mouth.” She directed her first show at age 15 at Center Stage Theater on Dayton Street. Beal went on to receive her bachelors in theater from Wittenberg University, where she learned all aspects of theater, from sound mixing to directing. After working at several theater companies and spending time learning dramaturgy in graduate school, Beal returned to Yellow Springs in 2008 to raise her then six-year-old son, Dane, here as a single parent. Beal, who considers herself primarily a director, has also consulted with theater companies and schools as a dramaturg.

How did your YSKP experience influence your life and direction?

Beal: There are a number of things that YSKP did for me that I like. One is the pairing of the youth with professional artists. I think that’s a great opportunity for kids. Not that I want to eschew parent volunteers, but working with professional artists helps communicate our high expectations of our cast members because they are surrounded by professionally-designed and created costumes, sets, lights, multimedia. So you have to rise to the occasion. That’s one thing I think is different about the YSKP experience that I really appreciated and still greatly value within the company.

Fleming: It’s pretty amazing that an artist anywhere gets a platform for their work for 20 years. It’s true it’s working with youth but I’ve never in a certain way done kids theater. YSKP is like an avant-garde theater for youth. So that’s been a great experience for me, just for me to be able to have that.

What is the impact of the YSKP experience on its 1,200 alums?

Fleming: I get a couple of letters a year from kids, now adults, who are just realizing what it meant. They talk about [their YSKP experience] as confidence building and community building and just being able to have a sophisticated experience in the summertime. No doubt these kinds of revelations occur when they are talking to their peers. They start realizing how powerful it was.

Beal: The other thing I hear from kids, even though they don’t use this term, is work ethic, because we do have such high expectations.

As the new head of YSKP, what will you do differently from Fleming?

Beal: The company got its start in doing literary adaptations, and that’s something that we’re not doing as much anymore, but I’m interested in reincorporating. The literary adaptations create a nice way of giving us some name recognition even though we’re doing original work. That’s a small shift.

Fleming: I am a taskmaster and some people don’t like that and some people come up and thank me for it … But you have a pretty strong voice. You’re not a shrinking violet.
Beal: I will say that John has real high expectations and that is something I will continue and how those expectations are communicated may be different. But one of the things I have learned is that when you have 50 kids in an outdoor musical somebody has to lay down the law or it would devolve into chaos.

What are you inheriting in Yellow Springs Kids Playhouse?

Beal: I inherit the office and some interesting computer files that go back to the first show, when they still used floppy disks. I inherit the momentum and the name of the company. We have a sizable reputation. And maybe 20 years in Yellow Springs isn’t long enough to be considered an institution, but it’s significant.

Fleming: One thing I am happy about that you don’t inherit is that there’s no debt. There’s a tiny robin’s egg of money to move forward. So it could be worse. We just got an Ohio Arts Council partnership grant for this year. So there’s enough so you don’t feel like you’re standing on the edge of the abyss. But the fundraising never stops.
What is the past and future of fundraising at YSKP?

Beal: In recent years we’ve been funded about 60 percent through grants so we have been very lucky to continue to get grants.

Fleming: It used to be 100 percent from grants. One significant change over YSKP’s history is grants because I’m from the generation where grants were it. That world is shrinking …. but fortunately Ara is from a world where that is no longer a contingency and she has all the skills she needs for new funding. She has always been successful in social media, crowdsourcing, Kickstarter. We’re from different generations and my world is a shrinking world in terms of arts funding.

Beal: I think we’ll have to shift into more crowdsourcing fundraising. It’s great because it’s a better way to engage the younger generation. Then you also have to continue to keep in touch with your older donors so it’s an interesting mix to get these to coalesce into a budget.

What would you say to a potential donor about how YSKP is unique?

Beal: I grew up with YSKP, and when you’re 15 you think this is what everybody does, but then you go into the rest of the world and you realize that what you had was unique. I remember numerous times in college when I was working on my theater degree being shocked that everyone’s experience was limited to high school theater, which is a different animal than what we do here. After I traveled around the country for the last 15 years and worked and lived in different places, I never found a company that does what this company does …

Why are you stepping down from YSKP at this time?

Fleming: Twenty years seems like a good amount of time. Didn’t Thomas Jefferson say there should be a revolution every 20 years? It’s a nice even number and a generational number. It feels right. Retirement has a weird connotation because you are giving up and buying a condo in Florida but neither of those are true. I am still interested in doing theater projects and community art practices, which may be theater out on the street, maybe more interactive theater. And I’m going to keep teaching and directing theater at Central State. I’ve been doing that for three years.

How will both of you help make the leadership transition at YSKP successful?
Fleming: I think companies that are founder-based are hard to transition out of. It probably takes me disappearing for a while or at least backing off.

Beal: There will probably be a number of phone calls to John. He has a substantial institutional knowledge that I am planning on leaning on. But in some ways I’m uniquely set up to take over this company because I have been around since its beginning and I have been in and out in the last 10 to 15 years. But I also left for 10 years and worked for other theater companies and have other experiences that I get to bring back ….