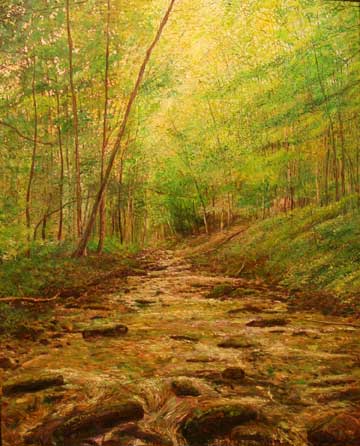 Longtime Yellow Springs artist Roger Smith is the featured artist at this Saturday’s Art on the Lawn, which takes place on the grounds of Mills Lawn School. Shown above is an oil painting of one of Smith’s favorite models, Glen Helen. (photo by Suzanne Szempruch)

This year’s Art on the Lawn festival ­— 10 a.m. to 5 p.m. Saturday, August 9, on the grounds of Mills Lawn School — has the happy problem of trying to find enough room for all the participating art vendors and activities.

As of Monday evening, 107 fine artists, artisans and crafts people had been accepted to display their original works at the annual, all-day event; and at least a handful more were expected to apply still this week for consideration.
Members of Village Artisans, the artist co-operative that founded and organizes the event each year, have set the record number of participating vendors at 117, but ongoing changes to the festival grounds -— including new permanent sculptures and tree plantings -— mean they have to get more creative with the available space.

Food vendors, a music performance and listening area, and for the first time this year, book sellers also will be included in the event, which is celebrating its 31st year in downtown Yellow Springs.

Organizers aren’t complaining. The event is a major fundraiser for Village Artisans, which this year charged a $15 jury fee of each applicant and an $85 booth fee for accepted participants. What’s more, a robust festival means a successful experience for everyone.

“You name it, we’ve got it,“ said Village Artisan member Pam Geisel.

Jewelry makes up about 25 percent of this year’s show, which according to organizers is less than other similar events that average 33 percent jewelry.
Local jewelry-maker and Village Artisan member Mary Kleismit said the jewelry artisans are so distinct in their work that she doesn’t worry about competition or duplication. She said she does well at each year‘s festival, earning as much as $4,000 in sales.

Participating artists come from across the country, with the majority from the tri-state area and the Midwest, said Geisel, who along with Amy Achor is co-head organizer this year. The lead role rotates annually among Village Artisan members, all of whom share the workload in setting up, overseeing and cleaning up after the event. The group’s membership has numbered 18 people in recent months, but a new member was accepted this week.

“Everybody does something,” said Village Artisan member Bill Felker, a photographer and writer who is handling publicity, among other duties, this year. “We’ve been working on this for three or four months. Actually, the applications have been coming in all year. It’s a crescendo of work.” Geisel said that more than a dozen local artists (from Yellow Springs and Clifton), including five Village Artisan members, will have their work in this year’s show.

Each year the event includes a featured artist, and this year Yellow Springs painter Roger Smith has the honor. Smith has participated in Art on the Lawn every year but one since 1994, and last year his work was chosen best of show. The prize, in addition to the honor, is free booth space this year.

Smith is especially known for his oil paintings set in Glen Helen and John Bryan State Park. But in addition to landscapes, he also paints large abstract pieces and spiritually-oriented work, often with an Egyptian theme.

A native of Middletown, Smith attended the school of the Dayton Art Institute until its closing in the early 1970s and then transferred to Miami University’s Middletown campus, but he describes himself as mostly self-taught.

He spent 10 years in California, and has a collection of large, Western landscapes to show for it, but returned to southwest Ohio in 1992, lulled back in part, he said, because of the verdant landscapes here.

“I fell in love with the green and the lushness,” he said.

Smith worked for 13 years at Michael’s arts and craft store —- “a good place for an artist,” he said, but left retail last September to put more time into the promotional side of being an artist, such as participating in shows and developing a website. But painting is where his heart is.

Smith’s family was more pragmatic than artistic, he said, but he and his identical twin both became artists. His mother has told him that his first word was “pencil-pencil.”

The outdoor paintings of natural landmarks are done primarily on site — he’ll even set up in the middle of a creek or river to get the composition he wants. Smith sometimes takes photographs to help fill in some details back in his studio, but the landscapes are mostly painted from life. The elements can cause trouble. He said he’s been caught in rain showers more than once, and he often contends with wind and temperature changes and even insects. But that comes with the job.

It’s not only an artistic pursuit, but a spiritual one as well for Smith.
“It seems like nature is under attack right now. I’m doing my small part in seeing the spirit behind (nature) … to return to the sacred and the mother who supports us,” he said.

Smith’s work is hung throughout the village in private and public spaces. His paintings also appear in collections throughout the United States as well as Canada, Australia, Britain, Germany and Finland.

He said the piece in Finland was the result of a sale at Art on the Lawn. A couple who had spent time in the area wanted to take home a landscape that reminded them of their stay here.

Smith said that he is always struck by the variety of work displayed at the Art on the Lawn festival. “It may not be as big as some other shows, but I feel it fairly represents the area,” he said.

Admission to the festival is free. Questions about the event may be directed to the Village Artisans shop at 100 Corry St., or call 937-767-1209.