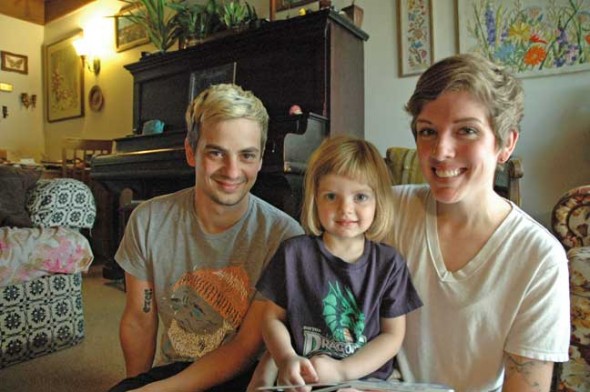 Caleab and Erica Wyant, here with their daughter, Rudy, will break ground on their new affordable home on Cemetery Street on Friday, Aug. 15 at 3:30 p.m. Theirs is the first of four Home, Inc. houses slated for the municipally-owned property as part of the Village’s first affordable housing project. Erica Wyant’s sons Ziven and Calum (not pictured) will also live in the three-bedroom home. (Photo by Megan Bachman)

A cozy cabin on Cemetery Street nestled near woods along a creek.

To Erica and Caleab Wyant, their future home sounds straight out of a children’s fantasy story. But soon the local couple will realize their dream of owning a home in Yellow Springs, thanks to the Village’s first public affordable housing project.

The Village’s development partner, Home, Inc., breaks ground on the Wyant home on Friday, Aug. 15 at 3:30 p.m. in a ceremony that is open to the public.

The first of four affordable homes to be built in two phases on the Village-owned property on Cemetery Street, the Wyant home will be built with a mixture of public subsidy, private funds, in-kind donation, permanent financing and homebuyer sweat equity for a final purchase price of around $120,000.

Having squeezed their five-person family into two bedrooms at the Hawthorne Place apartments for the last five years, Erica, 32, and her husband, 28, are eager to soon have a home spacious enough for sons Ziven, 15, and Calum, 12, to have their own rooms, and for daughter Rudy, 3, to dance and run around without disturbing the neighbors below.

“We just wanted our own space and we always pictured our kids growing up in a real house.” Erica said this week.

With a dearth of affordable homes for a large family to buy or rent, the Wyants got on the Home, Inc. waiting list four years ago. Erica, a Toledo native who manages a group home for mentally-disabled adults in Dayton, and Caleab, of Kansas, Ohio, a production worker at an Enon tie dye t-shirt company, qualify to purchase a Home, Inc. house because they make less than 80 percent of the area median income.

The 1,330-square-foot, three-bedroom, two-bath home will give the family space to spread out, and will allow the couple to pursue their creative collaborations in music, film and photography, they said this week. The couple writes music and performs as electronic punk outfit YIKES! A Band, while Caleab is currently working on a screenplay and graphic novel. The couple is also excited for the close proximity to the John Bryan Community Center toddler park and skate park (Caleab and Calum are skate boarders), Glen Helen and downtown, they said.

Home, Inc. Executive Director Emily Seibel is equally excited by what she called a “historic” and “symbolic” project. While the Village has identified the need for affordable housing here since the mid-1990s, and has supported Home, Inc. houses by waiving some utility tap-in fees, the Cemetery Street project is the first spearheaded by the Village. Seibel sees the development as the culmination of many years of residents raising concerns about housing affordability, most recently documented in the 2010 Visioning process, and the tireless volunteer efforts of many villagers over two decades.

“This is a symbol of the village’s commitment to inclusion and diversity at our northern gateway, and will be for years to come,” Seibel said. “It’s wonderful to see the community coming together behind the idea that Yellow Springs is a stronger village by supporting economic diversity in a powerful way.”

The Cemetery Street development took off in 2011 when Village Council approved a memorandum of understanding brought forth by then-President Judith Hempfling and member Lori Askeland to sell four lots on 0.7 Village-owned acres on Cemetery Street for half their value, appraised recently at $42,500 each, for the construction of permanently affordable homes. Home, Inc. was later selected as the developer after a request for proposal from eligible non-profits. Using Home, Inc.’s community land trust model, in which homebuyers agree to take a more modest return-on-investment, the property will remain affordable to future occupants as well, Seibel said.

Home, Inc. has since leveraged the Village’s support by raising $167,498 towards the total cost of the development, estimated at $740,000. Funding for the Wyant home, which will cost $185,000 to construct, also came from the Morgan Family Foundation, the Ohio Community Development Finance Fund, the Federal Home Loan Bank of Cincinnati, Vectren Foundation and the Huntington National Bank. Home, Inc. aims to raise about one-third of the total construction costs to make the house affordable to its “underserved clients,” Seibel said.

To meet the additional demand of the new houses along Cemetery Street, the Village will also pay to replace the existing four-inch water line with an eight-inch line at a cost of $130,000, according to Village Manager Patti Bates this week. The new line will serve the entire 13-home neighborhood with expanded fire protection.

The Wyant home is the 18th permanently affordable house Home Inc. has built or rehabbed in the community since 2001.

Caleab Wyant was living in Fairborn when he and Erica met at his brother’s birthday party in northern Ohio. After a short long-distance relationship, Erica decided to move to the area in 2009 with her two sons from a previous marriage. While apartment hunting in Enon, the two spotted a hand-made sign on the highway on-ramp advertising apartments in Yellow Springs and decided to take a look. They quickly fell in love with the aesthetics and character at their Hawthorne Place apartment, which would make the perfect canvas for their vintage “funky wall art.”

Erica was later thrilled to find out that Yellow Springs schools were even better than the excellent schools she was used to in the Toledo area and was impressed with the sense of safety she felt in Yellow Springs and the unique “neighborhood living” the town offered.

“It was this sense of community that was so amazing,” Erica remembers. “I just feel really safe here as a parent. If my kids were going downtown, I didn’t have worry. … It was very apparent we were going to stay here for a long time.”

But despite loving their cozy apartment, the Wyants, who were married in Glen Helen in 2010, were always on the lookout for a house. Caleab, who said he hadn’t felt a sense of home since moving out of his childhood house, wanted a place to dig in his roots.

“I wanted something I know is solid and that we may not move from that for a very long time,” Caleab said.

Seibel said the Wyants are the kind of family the project was aimed at, and will benefit the community by generating new property tax revenue, which goes to the school district and Village, by providing new utility payments to the Village, as well as with their creative energy as community members.

As with many recent Home, Inc. homes, the Wyant home will be more energy efficient than the conventional home, with 2×6 smart framing, tight construction, an insulated foundation, universal design and other features designed by Columbus-based architect Meera Parthasarathy, Seibel said. A construction contract is being awarded this week.

Currently there are more than 40 families on the Home, Inc. waiting list — the most it has ever had — who are working to improve their personal finances and prepare for home ownership.

According to Seibel, now is a good time to get on its waiting list.

“There are currently slots open for the C-Street project, so this is a great time to begin working with program staff to find out if you’re ready and if not, how to get there,” Seibel said.

While on the waiting list, Home, Inc. teaches potential homebuyers how to save for down payment and closing costs, how to set financial goals, how to improve financial health, and learn what banks look for before making loans. Earlier this year, Home, Inc. received a $7,700 grant from the Yellow Springs Community Foundation for one-on-one, individualized homebuyer coaching services.

Seibel encourages those interested in learning more about Home, Inc. or the project to attend the groundbreaking, where plans and specs will be available for review and any questions can be answered, she said.

Home, Inc. is also hosting a free Community Land Trust Orientation on Wednesday, August 20th at 6 p.m. in its offices, located at 202 South Winter St., on the second floor of the United Methodist Church. The orientation is one requirement for the waiting list.