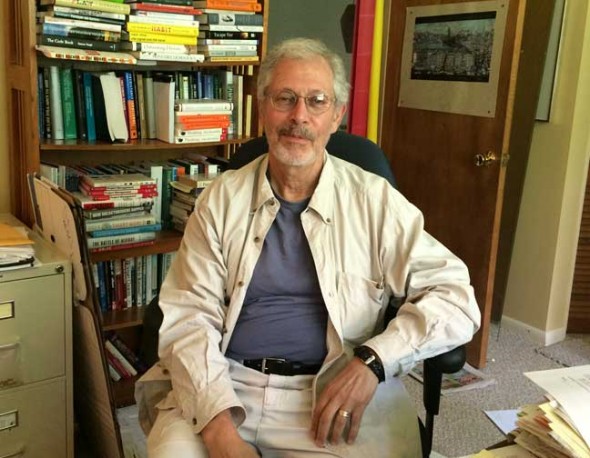 Local cognitive psychologist Gary Klein is an author, researcher and entrepreneur who has spent 35 years here studying how people make decisions, become experts and experience insights. Klein, here in his office at his Wright Street home, had his latest book, “Seeing What Others Don’t: The Remarkable Way We Gain Insights,” published last year. (Photo by Megan Bachman)

That’s the response many people give after making a quick decision in a stressful situation. But what does it mean? How do we really make decisions? And how can we make better ones?

For the last 35 years, local cognitive psychologist Gary Klein has probed these and other life questions. Along the way he found out that most existing decision-making models were wrong and came up with one that worked, all the while creating a new way to research decision-making.

It all started by studying Dayton firefighters in the mid 1980s.
Charged with understanding how people make life-or-death decisions under extreme time pressure and amidst uncertainty, Klein eschewed controlled laboratory conditions in favor of field interviews.

“Not only did I find that the models that people had of how people make decisions were inadequate, I found out how people actually make decisions,” Klein said of the project, a turning point in his career.

Firefighters who said they “just knew what to do” were actually relying on what their years of experience bought them — the ability to recognize patterns, a sense of what is typical, the ability to see anomalies and their beliefs about what is possible, Klein said. Called “tacit knowledge,” it is vastly more important to good decision-making than an “explicit knowledge” of facts and procedures, Klein explained.

While conventional decision-making experts said people make decisions by rationally comparing different options, Klein found they compared, but did so intuitively. But experience alone is not enough, he added.

“You can have 10 years of experience or one year of experience repeated 10 times,” Klein said. “It’s the people that reflect on what happened and what they learned and seek out new challenges that become the real experts. They can always tell you about the last bad decision they made because it is still needling them.”

The implications of Klein’s findings on how firefighters make decisions were profound. His local consulting company, Klein and Associates, took off, growing to almost 40 employees by the time he sold it in 2005. He pioneered a new field called naturalistic decision-making, which studies how decisions are made in the real world by experts rather than in artificial laboratory tests.

Klein went on to write or edit nine books and inspire celebrated author Malcolm Gladwell, who used Klein’s research in his 2009 book, “Blink,” and wrote in praise of Klein’s most recent book: “No one has taught me more about the complexities and mysteries of human decision-making than Gary Klein.”

Klein’s work has informed fields from healthcare to the military, from consumer products to the petrochemical industry. He has studied everything from how weather forecasters make predictions to how people decide what to watch on television, how nurses make decisions in neonatal intensive care units to how court mediators work best. He has interviewed music teachers, tank platoon leaders, chess players, oncologists, helicopter pilots, baggage screeners and more.

At 70, Klein is still at it, working from his Wright Street home and the Vie Design building to improve decision-making and enhance expertise. He is launching a new company that uses innovative experiential training methods that teach the right way to make decisions. And his most recent book, “Seeing What Others Don’t: The Remarkable Way We Gain Insights,” answers another life question — how do we improve our ability to have dramatic insights into the questions that stump us?

Today Klein still gets more requests for work than he can handle, while looking back on a career that was never dull.

“I’ve just felt fortunate being able to study these fascinating questions,” Klein said. As for his impact on society at large, Klein is modest, but with some probing admitted:

“People have come up to me at firefighter conventions and said, ‘You’ve saved lives.’”

At one time, Klein thought he would have a typical career as a research psychologist and college professor. After getting a doctorate in psychology at the University of Pittsburgh -— where he met his future wife, Helen, who would also become a Ph.D. psychologist — he taught at Oakland University in Rochester, Mich. He had a comfortable job when he quit in 1974 to move to the Dayton area in support of his wife, who landed a teaching position in the psychology department at Wright State University.

“I was on my way to tenure, was turning out typical studies and had an adequate, rewarding, pleasant career,” Klein recalled.

But instead of finding another job in academia, Klein decided to do something different, and was offered a civilian position as a research psychologist at Wright Patterson Air Force Base. The family later moved to Wright Street in Yellow Springs, where they still reside, while a daughter was attending the Antioch School. The couple raised two daughters, Devorah and Rebecca, in town.
While at Wright Patt, Klein researched how to most effectively train pilots in flight simulators, which became especially important in the 1970s as a way to conserve fuel during the Arab oil embargo. Klein was charged with creating the conceptual design of the simulator so pilots could become skilled with little actual flight experience, a project that set the stage for his later career.
“I was doing trivial, typical laboratory-based research, but here was the question of what is the nature of expertise and how do we bring it to them,” Klein recalled. “And this wasn’t just an academic question, it was a real question because their lives were going to depend on it.”

Klein ended up quitting his Air Force job in 1978 and starting his own consulting firm in Yellow Springs to further explore the concepts of expertise and decision-making that fascinated him. The firm struggled for its first seven years, because, as Klein explained, “I didn’t know what I was selling.” The turning point came when Klein received a Department of Army grant to study how people make life-or-death decisions under extreme time pressure in uncertain situations. Klein realized that conventional models didn’t work and instead of going back into the laboratory, he went out into the field to find out how decisions were really made, choosing to study Dayton firefighters.

In contrast to most research into decision-making, which relied on undergraduate volunteers in highly-controlled settings encountering unfamiliar tasks, Klein was interested in researching real-world situations in people’s area of expertise. In conventional decision-making models, someone makes a list of different options, compares them and rates them. However, most people don’t make decisions that way, according to Klein. The firefighters he interviewed certainly didn’t. But how were they so comfortable with the first option being the best one?

“That’s what their experience buys them,” Klein explained. “They build up patterns and know what to do because the pattern tells them what to pay attention to and what to expect, and what has worked in the past.”

Klein’s decision-making model was so radically different from the accepted theory, he was afraid he was wrong, and spent many years replicating his studies through qualitative research aimed at understanding people’s decision-making process. Armed with a unique decision-making theory and an in-depth interviewing method, Klein’s consultancy exploded. Described as “half business, half research institute,” Klein and Associates grew to 37 employees by the time he sold it in 2005 (it is now called Applied Research Associates). The company, which started in the family’s Wright Street home, then moved to the Fels Incubator at Antioch College and later to the Humanist Center, and ultimately moved to Fairborn. Klein estimates that his former employees have spun off at least 11 research companies that are still in business.

Klein also became a successful author. Beginning in the late 1990s he wrote “Sources of Power: How People Make Decisions,” which was reviewed by the Wall Street Journal and sold more than 40,000 copies; “Streetlights and Shadows: Searching for the Keys to Adaptive Decision Making;” “The Power of Intuition;” “Seeing What Others Don’t,” and co-wrote “Working Minds: A Practitioner’s Guide to Cognitive Task Analysis.” Klein also co-founded an international movement called naturalistic decision-making in 1989, organized its first conference in Dayton and still helps put on its biannual meeting.

Currently, Klein works for MacroCogntition, a small firm started by his wife and located on the bottom floor of the Vie Design Building on Xenia Avenue. But he is starting a new company in Dayton based on his Shadowbox Method, which Klein describes as “a way to see the world through the eyes of an expert without the expert being there.” During the experiential process, a subject goes through a scenario, then learns what an expert who went through the same scenario did differently and why. The new company recently received a grant from the Defense Advanced Research Projects Agency, or DARPA, to make the Shadowbox program available on laptops and tablets.

Klein has recently worked on a project at a petrochemical refinery, studied what makes expert caseworkers in child protective services, helped patients with Type II diabetes better manage their blood glucose levels and found out how police officers can avoid intimidating the public and be “good strangers.”
In Klein’s latest book, “Seeing What Others Don’t,” published last year, he was inspired by a stack of newspaper stories he compiled over the years of people experiencing remarkable “a-ha” insights. The book tries to find common ground in breakthroughs like Charles Darwin’s understanding of evolution, James Watson and Francis Crick’s discovery of the structure of DNA and Harry Markopolos’ uncovering of Bernie Madoff’s ponzi scheme. In total, he looks at 120 stories of insights, again looking at real-world cases rather than attempting laboratory experiments.

Among Klein’s findings were that those who gained insight had experience, were able to escape from a fixation on flawed beliefs, took an active stance in looking for a solution and had a playful reasoning style. He also found that there are three common paths to having an insight — finding an inconsistency or contradiction in the information, spotting a coincidence or curiosity, or escaping an impasse in solving a problem in a state of creative desperation.
With the book, Klein’s aim was to use his insight research to help organizations encourage more insights among employees, rather than merely focus on reducing mistakes. For Klein, it’s more of the same: painstaking research with powerful real-life implications. In the end, Klein is optimistic that people can be insightful, make good decisions and develop expertise, even when he sees so many struggling to do so, in part because Klein has for so long looked at positive stories.

“I’m fascinated by stories of expertise and what insights people have when they see something that I wouldn’t have noticed,” Klein said. “There is a whole field that loves to study biases and why we do so poorly, but I’m interested in why people perform so well.”

One Response to “Psychologist Gary Klein— Fascinated by good decisions”