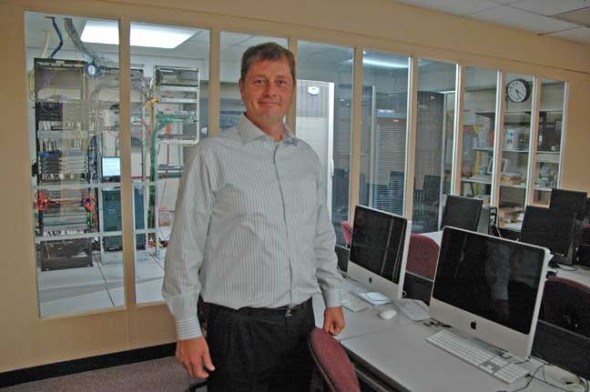 Thor Sage is the executive director of MVECA, a local technology consortium. (photo by Megan Bachman)

MVECA can help us get wired

Just as the Village of Yellow Springs has its own water, sewer and electric systems, someday it could also sell broadband Internet as a municipal service.

In fact, Yellow Springs may be in a better position than most other communities to offer broadband Internet connection to its residents and businesses, according to Thor Sage of the local technology consortium Miami Valley Educational Computer Association, or MVECA.

That’s because MVECA, located on E. Enon Road in Yellow Springs, already serves as a network hub for more than 35 school systems and other clients in a six-county area, with high-volume fiber optic connections, that carry Internet and network traffic, snaking into town from many sources.

And not only does the fast-growing non-profit already lease massive amounts of fiber optic infrastructure in the region to the tune of $64,000 per month, it is now diversifying its fiber connections, working with independent Internet service providers to expand service offerings and partnering with governmental agencies in Greene and Clinton Counties and the City of Springfield to build new public fiber optic infrastructure in the area.

“I would argue the Village is in an excellent position to become a technology-enabled community,” Sage said in a recent interview. “Because of the volume of services we’re buying from Time Warner, AT&T, and others, we have service providers building into our area … We could help the Village of Yellow Springs offer robust Internet connections to new businesses in a way that would be very attractive.”

Local residences, businesses and other institutions currently choose between Time Warner Cable, AT&T and Ciscom for Internet services. Municipal broadband, which is now being built in some 400 communities in the U.S. according to a Wall Street Journal article, offers an alternative to the few dominant Internet service providers, or ISPs. Sage said he believes that the Internet services the Village could provide, with technical support and network hosting from MVECA, could be faster and better quality than residents now get with private companies.

“Anyone buying Internet today is using fiber optics owned by someone,” he said. “It’s usually a private company, but maybe it could be owned publicly.”

While the Village could offer new broadband service to local customers through existing cables, it could also build its own fiber optic cables throughout town, a proposal supported by local citizens group SpringsNet, or it could offer municipal WiFi by deploying different infrastructure, Sage said.

Recently Sage proposed that Council perform a study on what would be needed to create a wireless network downtown at the cost of $7,600. Initial estimates are that to provide WiFi access from Mills Lawn Elementary School to John Bryan Community Center, including the downtown area along Xenia, Corry and Dayton Streets, would require 12 wireless access points installed on downtown lightpoles and cost about $68,000, according to Sage.

By exploring options for offering its own Internet services, not only could the Village offer high-quality services to existing residents and businesses, it could help encourage new businesses, who may need fast connections and big Internet bandwidth, to locate here.

“I want the Village to understand that if it wanted to feature technology access as a primary economic development piece, it could do it,” Sage said.

About MVECA
One of 22 licensed information technology centers that operate as part of the Ohio Education Computer Network, MVECA is structured as a Council of Governments and is managed by its members. MVECA client organizations now include public school systems, independent schools, higher education institutions and governmental bodies. A shared-service organization, MVECA pools the resources of its clients to deliver Internet, network and other technology services at reduced costs. For its participating schools, MVECA offers ISP and software hosting, software support and training, server hosting, hosted voice and wireless solutions, fiber optics resource management, classroom management tools like Student Information, ProgressBook and more.

Founded in 1980 and originally based at the Greene County Career Center, MVECA expanded from providing accounting and payroll services for area schools to technology services starting in the 1990s. It moved to its present location at the former Morgan Middle School in the late 1980s. Only since 2011 has MVECA begun to offer its services outside of K12 education to governmental and non-profit organizations.

As Sage explained, when schools began to face financial difficulties during the recession, MVECA expanded service offerings beyond education and focused on growth so that reduced costs could be shared among more clients.

“There was no way I felt comfortable going to schools to ask for fee increases,” Sage said. “Because our services save organizations money by distributing costs, the more clients we have, the more we can save everyone. That’s the name of the game.”

As a result, MVECA has grown from around 12 full-time employees several years ago to 17 today, with plans to add two more in the next few weeks, Sage said.

MVECA also recently rebuilt Antioch College’s network “from the ground up,” is the new Internet service provider of local radio station WYSO-FM, and now provides Internet services to the Village for the first time. While its Internet services are typically through Time Warner or AT&T (“We fight with these companies so our clients don’t have to,” Sage said), MVECA is beginning to collaborate with more independent ISPs coming into the area and sees an opportunity for the Village to become its own ISP, with MVECA equipment and support.

Options for municipal Internet
More municipalities are stepping into the Internet services field as demand for Internet access grows exponentially and new fiber optic lines are installed across the country. Globally, Internet traffic in 2018 will be 64 times the volume of the entire global Internet in 2005, according to a June report from Cisco systems.

As for municipal WiFi, Sage looked into extending WiFi downtown after community members and the Chamber of Commerce raised concerns about limited voice and data service coverage in the village during Street Fair events, which Sage called a “public safety issue.” Extending WiFi throughout downtown could save money for local retail businesses who now purchase their own Internet services, increase pedestrian traffic and give street vendors the opportunity to access “robust” Internet services to take credit cards. A municipal WiFi network throughout town could additionally expand services for local police and other municipal employees such as wireless radio-frequency identification, Sage said.

Building new fiber optic lines across the entire village would entail addressing “construction costs that are significant,” Sage said, but are within the realm of possibility. To envision the infrastructure, Sage explained that a single fiber optic cable, made of extruded glass or plastic, is thinner than a strand of human hair, and a cable has hundreds of strands bundled together to deliver services to a wide area at the speed of light. As Sage explained, “You can pump a lot of data across a couple of strands of fiber.”

MVECA is also beginning to work with more municipal governments, and has partnered with the City of Springfield on a grant application to the Local Government Innovation Fund of the Ohio Department of Development to develop its fiber optic infrastructure. Proposals to work with Greene County and Clinton County are also on the table to connect county facilities with fiber optic infrastructure that is publicly owned, Sage added.