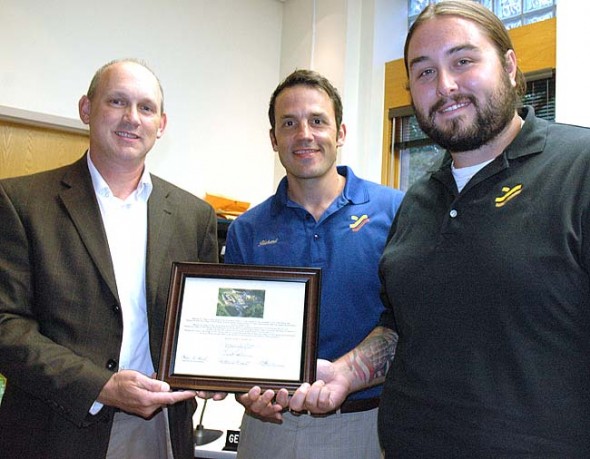 The staff of the Village wastewater treatment plant was honored recently by the Ohio Water Environment Association for nine years without a safety violation or time lost to an accident. Pictured receiving the OWEA George W. Burke Award at Monday’s Council meeting are, from left, Superintendent of Water and Wastewater Joe Bates; Operator I Richard Stockton and Operator II Brad Ault. (Photo by Diane Chiddister)

There’s a lot that people don’t know about the local wastewater treatment plant. For instance, most don’t know that working there can be dangerous.

But Joe Bates, the Village superintendent of water and wastewater treatment, knows and that’s the important thing. Recently, Bates and the Village of Yellow Springs were recognized by the Ohio Water Environment Association for the plant’s safety record. The Village received the Water Environment Federation’s George W. Burke Award for 2013, after having lost no time to accidents or safety violations for the last nine years. The annual award is given to only one municipality in the state.

Bates, along with plant employees Brad Ault and Richard Stockton, were recognized for their award at Monday’s Village Council meeting.

The potential for accidents is high in the wastewater treatment business, as evidenced by the 2006 death of an employee at the Georgetown, Ohio, plant. The man fell into a clarifier tank and drowned, according to Bates.

“Water is the biggest danger,” he said, although the job also requires that workers interact with high voltage, rotating machinery and potentially harmful chlorine gas.

The local plant’s impressive safety record can be linked to a culture of safety, according to Bates, and the Village holds regular monthly safety meetings for all its employees. Workers must also wear protective gear — including steel-toed shoes, hard hats and safety glasses — whenever they are working at a task that requires such protection.

“Anytime you’re taking a sample or working with equipment, you have to protect yourself,” Bates said. “Some people flush needles down the toilet and you have to be careful not to get stuck.”

Plant workers must also be alert for biohazards, since the wastewater is cleaned by a natural process.

The only chemical used in the process is chlorine, added at the end of the process to disinfect water before it goes into the Yellow Springs Creek.

Overall, most villagers know little about what happens to the water they use, after they use it.

“Most people don’t know what happens after they flush the toilet,” Bates said. “They just know the water goes down the drain and they hope they never see it again. When they do, it’s a problem!”

Here’s what happens when water goes down the drain:

Each day, about 450,000 gallons of water flows into the plant, after villagers flush their toilets, take showers or wash clothes. The water — which Bates has seen surge up to 6.5 million gallons after an extreme storm — first travels to the headworks building, where a machine screens out solids. Most assume the water comes to the plant chunky with waste, but in fact most solid waste is diluted and the water flowing into the plant is mainly liquid and grey. Still, Bates sees a fair amount of strange stuff coming through, like tampons and rags.

Bates also advises villagers not to flush baby wipes or the like down the toilet. “They do not break down and they clog our pumps within the system,” he said.

The job used to require that plant workers physically remove the solids with rakes but thankfully, now a machine performs that task. Still, the building holds a pungent odor.

The solids go to a landfill, while the wastewater next travels through a train of nine treatment tanks which consist of anaerobic, anoxic and aerobic tanks for biological phosphorous and nitrogen removal. Phosphorous, a mineral found in detergents, is linked to the algae growth that poisoned drinking water in Toledo recently. Due to the risk of algae growth, there’s been a push to remove phosphorous at wastewater treatment plants, Bates said.

Most biological phosphorous removal systems use the same basic biochemical principles. In the anaerobic tanks, which lack oxygen, certain bacteria seek other oxygen/energy sources, thus removing phosphorous from the wastewater. Essentially, according to Bates, plant workers are creating an environment for the bacteria to consume phosphorous, with the end result that phosphorous ends up in the sludge instead of going out to the Yellow Springs Creek.

The aeration tanks’ churning motion next releases nitrogen, which is prevalent in urine, into the atmosphere. The treated water then flows to the round clarification tank, where remaining solids settle to the bottom. The settled solids are pumped back to the beginning of the treatment process to start treatment all over again, while some excess liquid sludge is pumped into two large sludge digesters and then pressed or pumped into large filter bags to dry, then eventually used for fertilizer on a farmer’s field. The remaining water, which for the first time appears clean and clear, is disinfected with chlorine before traveling to Yellow Springs Creek.

Each day Bates oversees the entire process, making sure the various biological processes are doing their job. Having spent most of his adult life in the water and wastewater treatment business, Bates is especially proud of the local plant’s safety record, and credits his employees for their careful work habits. While creating a culture of safety may take a bit longer, in the end it makes far more sense, he believes.

“When you have a good safety program, it saves heartache, time and energy,” he said. “If you’re going to take the time to do something, you should do it right the first time.”