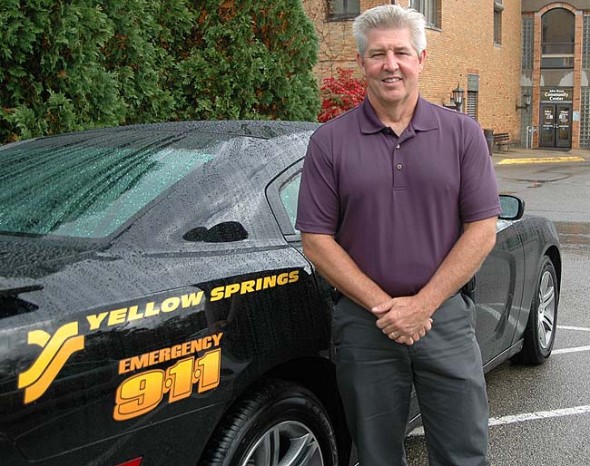 Dave Hale is the Interim Yellow Springs Police Chief who succeeded Anthony Pettiford last week and expects to be replaced by a permanent chief sometime in November. (Photo by Lauren Heaton)

After just a few days on the job, Yellow Springs Interim Police Chief Dave Hale can see that the YSPD is an “established, well-run department,” he said in an interview last week. During the two months or so he expects to be here, he intends to keep it that way.

“I view my role as maintaining,” he said. “If there are things I see, rather than impose change, I’ll make a note and see if the next chief wants to address it. My aim is to create very few waves and ripples.”

Village Manager Patti Bates hired Hale last week to replace former Chief Anthony Pettiford, who resigned in late September for medical reasons after almost two years in the position. Village Council approved the full-time contract with Hale at its meeting Monday. The Village has already launched its search for the next permanent chief, the applications for which are due on Oct. 31. The selection process is expected to take four to eight weeks beyond that, Bates said this week.

Yellow Springs is a much smaller community than Hale covered in his 29 and a half years with the Montgomery County Sheriff’s Department. The county has a population of about 400,000 outside Dayton proper. But Hale is familiar with managing smaller rural areas, such as Jefferson Township, a community of 7,000 and one of three that contracted with the sheriff for local policing.

Hale,51, began his career as a dispatcher and moved up steadily from a road patrol deputy, to the rank of sergeant, captain and finally major, serving in many capacities including leading the formation of a county-wide drug task force, heading the violent crimes investigation unit and supervising the human relations section for the sheriff’s office of 446 employees.

Born and raised in Mad River Township, now Riverside, Hale got into policing by chasing shoplifters as a bagger at Kroger’s on Wayne Avenue. He’s enjoyed the opportunity the field has given him to experience a broad range of jobs, including undercover investigations, time in the courts and supervising the units he served in as a younger officer. And at the far end of his career, he sees his biggest strength in teaching.

“A lot of knowledge gets passed on by talking with people — discussions are the best place to learn,” he said.

Regarding what makes policing smaller communities different from larger ones, Hale said that higher call volume reduces officers’ ability to get to know many of the residents and build trust.

“When you know the residents, trust builds, and people can relate to you and understand what you’re trying to do,” he said.

Hale retired from the sheriff’s office in April. He lives in Washington Township with his wife and their two college-age children.