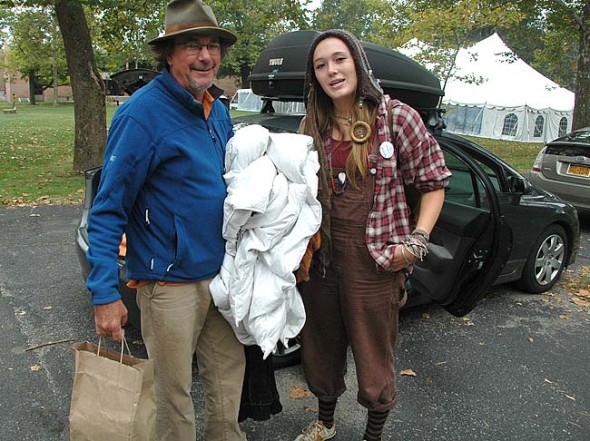 The 71 students in the Antioch College incoming class moved into their dorm rooms last week. Above, new student Esmé Westerlund of Nantucket, Mass., moves in with the help of her father, Ron. Classes began Tuesday. (Photo by Megan Bachman)

The incoming class at Antioch College may be more diverse, more international and more committed to saving the world than the three classes above them.

According to Antioch Dean of Admissions Micah Canal, 40 percent of the new class are non-white or Hispanic, while nearly one-third are the first generation of their family to attend college. Students with dual citizenship hail from Egypt, Mexico, Liberia, Nigeria, Canada, Burundi, Kenya, Japan, Australia, United Kingdom and Germany. And many also have already committed to making an impact on the world.

The exceptional qualities of the revived college’s fourth class are the latest reasons for optimism at Antioch, which is also celebrating the recent opening of its Wellness Center and Foundry Theater. Meanwhile, a massive solar field connected to a geothermal heating and cooling system is soon to come online and a new Science Building is set to open in mid-December.

This week 71 new students settled into their dorm rooms in North Hall after a dizzying week of orientation activities. Joining them at Antioch this fall semester are nine new faculty members and several new administrators, including a new vice president of academic affairs, a new dean of community life and a new director of the Coretta Scott King Center.

But after a flurry of major building and infrastructure projects and administrative expansions, growth at Antioch could soon be slowing. The incoming class is the last to receive the full tuition scholarship known as the Horace Mann Fellowship. The current enrollment of 246 students is only expected to grow to around 500 by 2022. And while faculty hires are expected to continue to rise, the administration won’t likely grow as fast as it has been, according to Vice President of Finance and Operations Andi Adkins.

Reflecting this week on Antioch’s progress since reopening in 2008, Canal, who was originally one of eight people working to first purchase the college from Antioch University and then reopen it, is awed.

“The amount the organization has grown and what we have done is Herculean and I feel honored to be part of this effort,” Canal said. “We are still a 160-year-old startup that is trying to reinvent higher education.”

“You’re coming to a college that is re-creating itself in a time where there is an enormous amount of skepticism of higher education in America,” Roosevelt said. Today most undergraduates are “drifting through college with no clear sense of purpose,” Roosevelt added. At the same time many colleges are simply producing “excellent sheep” while focusing on sports and fancy facilities and turning a blind eye to the “party culture.” But Antioch, he said, is a “very different kind of place.”

Antioch does not attract or produce excellent sheep, Roosevelt said, and Antioch is not a place to “hibernate with other people,” as happens at many small liberal arts colleges. Instead Roosevelt called Antioch a “four-year engagement with the world — not a retreat.” Through co-op experiences and impacting an institution that is still a work-in-progress, Antioch students “architect their own education.”

“We are still a work in progress and still establishing our systems and culture,” Roosevelt said. “We’re also a sensitive place because what you do and what you say can have a more profound effect here than at any other school you would attend.”

Admitting the kind of students that can do the academic work (oft-described as “rigorous”) and who want to contribute to rebuilding the college has been an important task for Canal’s office. But once again, Canal said he believes that the right students are here for the right reasons, despite the fact the college received only 10 percent as many applications (around 300 this year) as it did in 2012 after news of its full tuition scholarship went viral.

Looking ahead, Canal said the Horace Mann Fellowships have been de-emphasized during recruiting in recent years. The fellowships will be phased out starting next year, when they will be reduced by 50 percent.

“The value of the Horace Mann Fellowship is something we don’t talk about anymore,” Canal said. Instead, “we talk about the rigor of the academics and the vision that we have empowering the students to practice what they learn in a classroom environment in four co-ops.”

Retention of students at Antioch is also not a concern despite the first class dropping from an initial 35 students to 22 this semester, all of whom are expected to graduate next spring, according to Canal. The Class of 2015’s attrition rate was not surprising, Canal added, considering they were an “extraordinary pioneering group” who had just six faculty members and three open buildings and were without a dining hall for two months.

“They did some of the heaviest lifting,” Canal said. Today’s Antioch students are taking a much lower risk, he added, especially since the school was granted candidacy for accreditation status earlier this year.

As its students begin courses and co-ops this week, administrators at Antioch are also moving the Antioch College Village concept forward, finalizing campus stormwater management and landscape plans and planning for the next self-study on the path to accreditation. When the Science Building is complete, renovations on campus will finally slow down as a new residence hall isn’t needed for two years and renovations of Main Building aren’t projected to begin for at least 10 years. While progress at the college may be less visible in coming years, the work continues apace, administrators said this week.