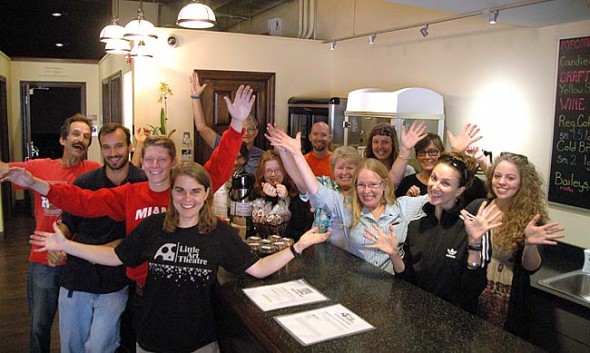 Little Art Theatre celebrates one year of its rebirth

Apparently, if you re-build it, they will come.

Since the Little Art Theatre was gutted and renovated for $600,000 a year ago, moviegoers have streamed in.

Whether it’s the cushy new seats, draft beer pours, crystal clear picture or spacious lobby, attendance and concession sales at the spruced-up theater have risen since it reopened last September.

But costs to run the Little Art have swelled too. For the foreseeable future, the nonprofit theater will rely on donations, while its board and staff experiment with creative programming to bring in more patrons.

One year after the large-scale renovation, the Little Art is both celebrating — and fundraising for — its new existence.

A one-year anniversary celebration of the new Little Art Theatre will take place on Sunday, Sept. 28, featuring a wine tasting at The Winds Cafe sandwiched between two showings of “A Good Year,” a fitting metaphor for the theater’s last 12 months, according to board members.

“A Good Year” will be shown at 3 p.m. and 7 p.m. with the wine tasting from 5 to 7 p.m. While the event is for Friends of the Little Art, anyone can join the donor A-list at the event with a minimum donation of $50.

Between the showings of the film about Italian wine country, Michael Brown, a local wine rep, will lead a wine tasting with hors d’oeuvres. The 8-minute short “Last Reel” by Steve Bognar and Julia Reichert about the dismantling of the Little Art’s 35-mm projector will also be screened between films at the theater.

“When you stop and think of all the things we’ve done, it’s been a good year,” said board member Roger Reynolds this week. “But it’s taken a lot of energy.”

Board and staff members have been working hard to bring a younger audience and more out-of-towners to the renovated theater now that it is “more comfortable and accessible,” by offering a greater variety of programming, they said.

Upcoming events include the return of the Horrorfest movie marathon, a showing of the Russian Bolshoi Ballet, a free Holiday Children’s Classic festival every weekend between Thanksgiving and Christmas, a New Year’s Eve film screening with champagne, and more.

While attendance increased by about 10 percent after the renovation, along with concession sales — where the majority of the theater’s profit comes from — its costs have risen in step. There are now two full-time staff members to manage the theater’s expanded programming along with a team of volunteers that work the concession stand shifts to meet high demand for food and drink. Meanwhile, renting digital cinema packages costs the same as bulky 35-mm canisters did while utility costs have grown.

As a result, the Little Art still needs to raise more than $50,000 each year to keep its doors open. So drawing movie patrons, and donors, from outside the Yellow Springs community is paramount, board and staff said.

“The community is so supportive, but they just can’t come to the movies every night,” Reynolds said. There are some 400 Friends of the Little Art memberships, about 75 percent hailing from the Yellow Springs area, according to new Operations Manager Gilah Pomeranz.

But with such a high-quality theater, board and staff believe they can bring people in for more events and encourage more corporate giving, they said. As board member Jeannamarie Cox Peifer said, the new Little Art is “more inviting.”

“It’s actually more of a gathering place,” she said. “There is more chatting and not the same congestion.”

Other board members pointed out the popularity of its new hearing assistance system, better sight lines and “crystalline sound quality” after transitioning from analog sound with four speakers to Dolby digital surround sound with 12 speakers. During its five-month renovation, the Little Art was literally rebuilt from the ground up with a new floor poured, seats replaced, a brand-new digital projector and sound system installed, a lounge area added and the concession stand and lobby expanded.

While the Little Art’s patrons were loyal over the years, sitting on seats held together with duct tape, the new theater gives the nonprofit new opportunities to reach out to a wider community and make better use of the theater, Cowperthwaite said. For example, the successful Retro Matinee series, which regularly packs the house, will likely be expanded.

“They are the classics and I think it’s not just that people love the movie, it’s seeing it on the big screen and with other people  — the way it is meant to be seen,” Cowperthwaite explained.

In another positive development at the theater, Cowperthwaite, who has managed the Little Art since 1978, took her first vacation ever this year, two “staycations” during which she was called in for occasional theater emergencies. If the theater transition continues to go well, she is planning on her first true out-of-town vacation in 2015, she said.

For Cowperthwaite, the Sept. 28 event is more than a celebration of the renovation’s one-year anniversary. It is a commemoration of the many steps that led to the 85-year-old theater’s revival, from its transition to a non-profit in 2009 to its colossal and unprecedented 2012 capital campaign to its complete gutting during 2013.

“This ‘Miracle Off Short Street’ has taken Herculean efforts and none of this would have happened had I not transitioned the theatre to a nonprofit in 2009 and been blessed with an extraordinary board of trustees,” Cowperthwaite said.

For more upcoming events or to become a member, visit http://www.littleart.com .