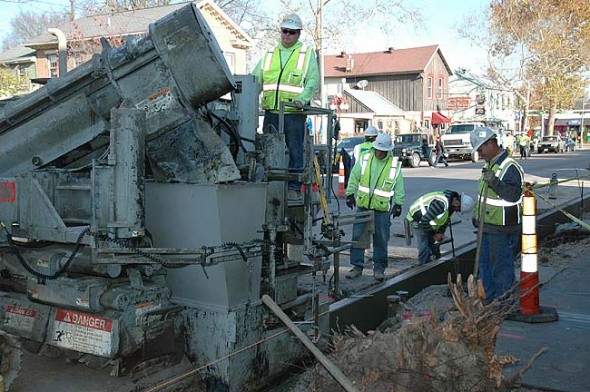 Crew members of Village contractor Durst Brothers Excavation were tearing up the town this week to construct new sidewalks and plant new trees along the east side of Xenia Avenue. The current phase of the streetscape renovation is scheduled to be finished before Thanksgiving. (photo by Lauren Heaton)

Although they were invasive and well past their expected lifespan, the eight Callery pear trees that were lifted from the downtown last week will be missed. But in their place this month, the Village is hard at work installing not just native and more diverse species, but also new sidewalks and lighting with buried conduit that aim to prevent a host of problems that existed with the former streetscape. Xenia Avenue is a mess this week, but according to Village Streets Superintendent Jason Hamby, the work is slated to be complete before Thanksgiving, when holiday shopping begins in earnest.

The work on the east side of Xenia Avenue only, from Dino’s Cappucinos to Town Drug, is phase II of the Village streetscape renovation, which began last year with sidewalk reconstruction from the Winds Cafe to Earth Rose. The overall plan to renovate sidewalks on both sides of Xenia Avenue from Corry to Glen Street was begun under Village Manager Mark Cundiff in 2010 to solve several problems caused by the former streetscape. By replacing the pears with more deeply rooted native species, the tree roots will no longer buckle sidewalks and cause a hazard for pedestrians, and they can grow to full size instead of being shaved to make room for overhead electric lines. The Village will also be relieved of the annual trimming and sidewalk repairs.

This year’s work began last week when project contractor Durst Brothers Excavating took down seven trees on the east side of the street in the middle of the night when pedestrian and vehicle traffic were lightest. The crew, supervised by the Village, then tore out tree root balls and the outside edge of the sidewalk and this week began laying underground conduit and new curbs, as well as framing new tree boxes for the seven new lace bark elms and European hornbeams that will be planted alongside seven new lamp posts. The crew will continue by ripping out the remaining sidewalk closest to the shops and next week begin pouring the full 15-inch concrete slab.

Throughout the process, according to Hamby, visitors will have access to the shops, albeit messy access and with slimmer walkways. Even after the concrete is poured, plastic-covered walkways will be provided for pedestrians to enter and exit the stores. The street will also remain open to vehicles, though at times reduced to just one lane.

There is no doubt that the process is inconvenient, according to Village Chamber of Commerce Director Karen Wintrow, also president of Village Council. “Construction is never fun — it’s always disruptive,” she said.

Originally scheduled to be completed in October, well before the holiday season, the project was delayed both to allow the October Street Fair to occur without disruption and because of delays on other projects the contractor was completing for the Village. According to Village Manager Patti Bates, throughout the summer and fall, contractor Chris Durst installed new water lines for the new Home, Inc. neighborhood on Cemetery Street, replaced old water lines on Limestone Street for the new Mills Hotel, and installed curb ramps along Dayton Street and Xenia Avenue, a project contracted through Greene County within the village. Other times of the year were no better — concrete can’t be poured in the winter months, and spring is the start of tourist season, she said. In addition, according to Wintrow, the Village had already appropriated funds for the work in the current year’s budget.

Once the project is complete, the Chamber has plans to decorate the downtown for holiday season shopping. The Chamber and Downing’s Do It Best have coordinated to give a strand of 150 holiday lights to each storefront business downtown. And the Chamber plans to again place lighted trees in the courtyard between Asanda Imports and Iona Boutique in time for Yellow Friday, the village’s honorary name for the commercial day after Thanksgiving.

The intrigue of the new construction has drawn 2-year-old Levi Clark downtown every day this week to watch the Bobcats and concrete trucks in action. And though they step more carefully, many villagers have continued their routine errands for coffee, groceries and other shopping, now done between chats with the workers just two feet away.

Once this phase of the project, bid at $79,310, is complete, Bates anticipates phase III — on the west side of Xenia Avenue — will follow, but has no idea when it would happen. And given the Village’s tight financial situation, she expects that public roadway grants would have to be lined up to help fund further construction. 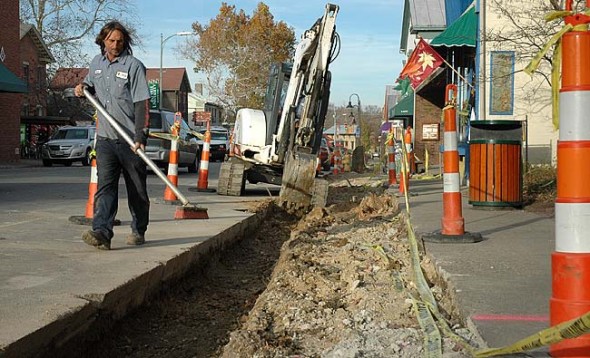