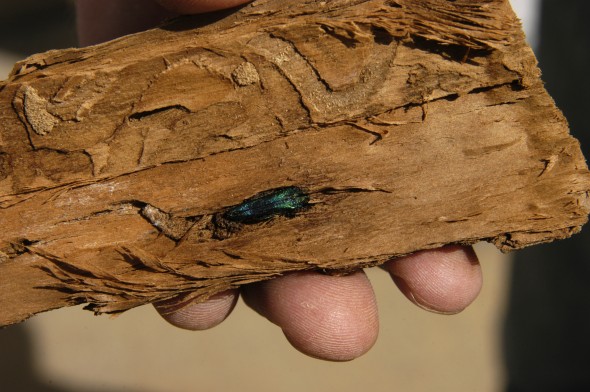 John Bryan's ash trees are the latest in the area to be removed due to infestation by the emerald ash borer. (Photo: http://ohiodnr.gov/insectsanddisease)

The Ohio Department of Natural Resources, or ODNR, began removal of a number of ash trees impacted by the invasive emerald ash borer, or EAB, from John Bryan State Park yesterday, Dec. 8. At times during the removal, parts of the park, including the main picnic area, will be closed temporarily. 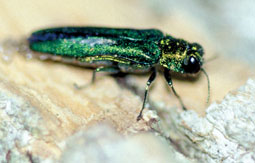 The emerald ash borer, an invasive species native to Asia, was discovered in North America in 2002, and has been infecting Ohio trees since as early as 2003. (Photo: ODNR)

Ash trees that have been impacted by the EAB infestation are hazardous and pose a public safety concern for park visitors and campers. EAB larvae feed on the tree beneath the bark, hampering the tree’s nutrient intake, and killing most trees within three to five years. The dead trees are brittle and break easily, causing large limbs and whole trunk sections to fall.

The trees will be cut into firewood and made available for residents. Firewood may be collected between the hours of 8 a.m. and 6 p.m., Dec. 22–Jan. 9. The firewood will be located at several areas within the state park.
Only firewood cut by the ODNR Division of Forestry and located at the designated pick-up areas may be collected and removed. Log splitters are prohibited, but chainsaws and hand tools are permitted to further process the firewood. Firewood will be available on a first-come, first-served basis.

For more information on the EAB and other invasive insects and diseases in Ohio, visit http://ohiodnr.gov/insectsanddisease.