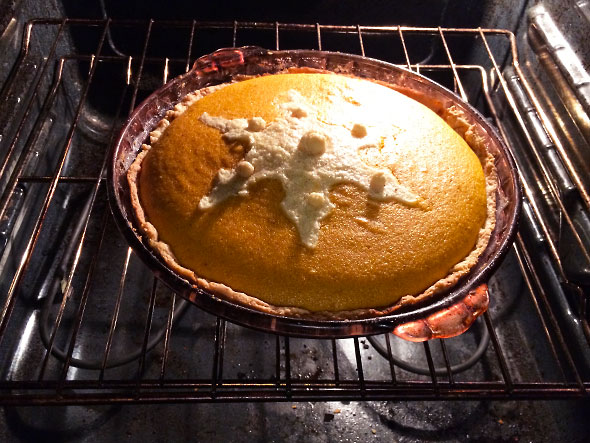 BLOG-The Pet Pumpkin and the Pretender 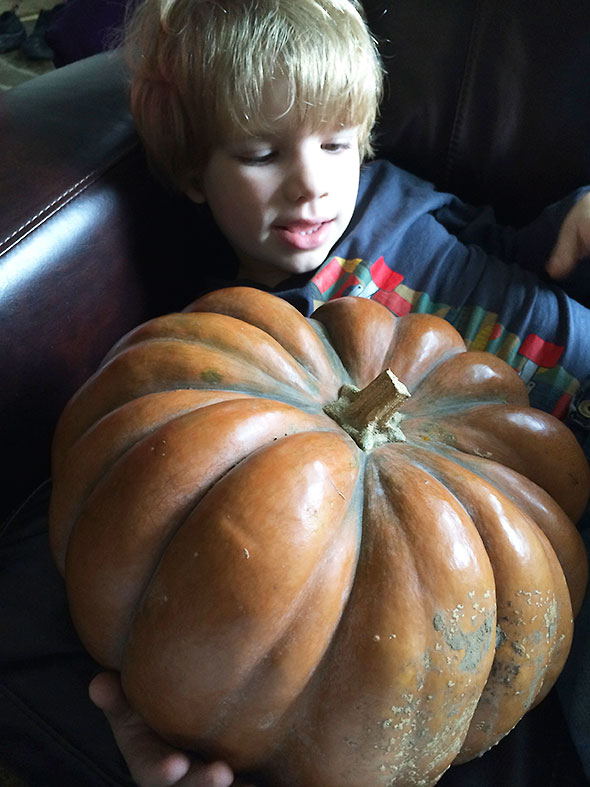 As fall draws to a close, I am once again astonished at how much pumpkin strikes my children’s fancy. Of course, they were interested in jack-o-lanterns leading up to Halloween, but their preoccupation with the oversized squash continued unabated through Thanksgiving and into the Christmas season. Just before Halloween, I brought an heirloom french pumpkin home from Flying Mouse Farms, and my son practically adopted it as a pet. Well versed in the beneficial companionship of an inanimate object from frequent readings of Bob Staake’s My Pet Book, my son would sniff it like a rose and snuggle with it on his lap enjoying the squash’s hefty weight.

When I had bought the heirloom pumpkin from Michelle Burns, she had sliced one for display. The outer skin has an antique-y look of burnt orange with accents of moss green, but the inner pulp is the bright orange of a mango. The pulp is flavorful as it is colorful. Michelle explained that French gardeners slice the heirloom pumpkin open and eat it raw with a dusting of salt. Given its raw potential, the pumpkin held great promise in my eyes: pumpkin pancakes, savory soup and pie. 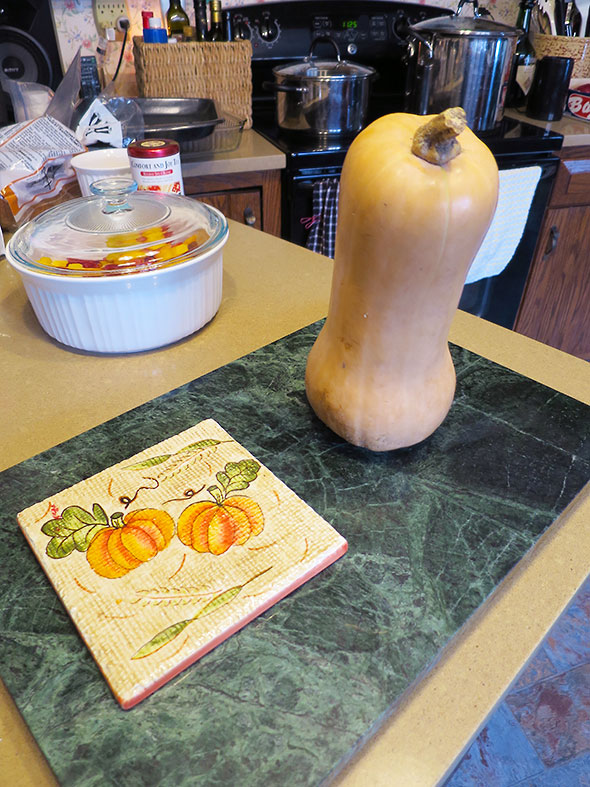 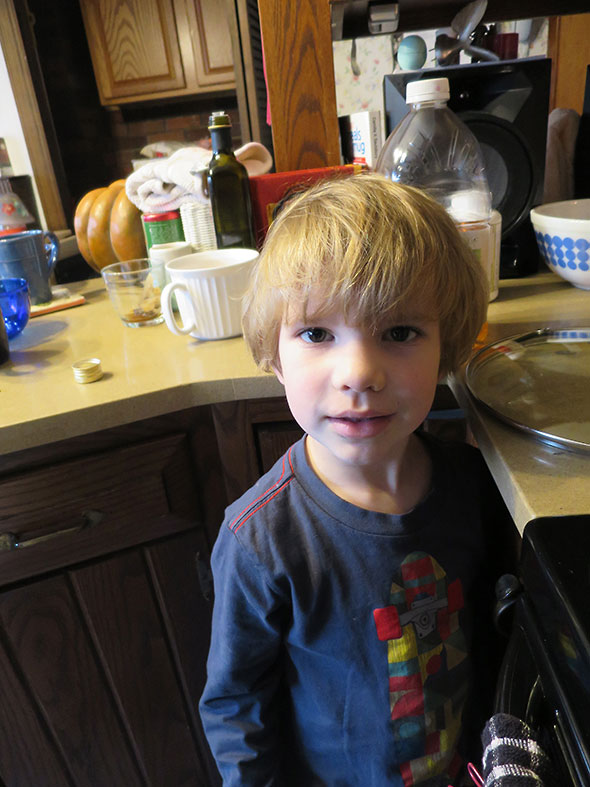 I did hesitate, though, splitting the squash’s skin. Prepping a pumpkin is time consuming given its dense pulp and uneven surface. In consideration of this difficulty and my son’s bonding, the heirloom was granted a temporary reprieve. Instead, I formed a Plan B. I had come across an intriguing video on the New York Times website in which Melissa Clark simulated a pumpkin pie using a different squash: butternut. 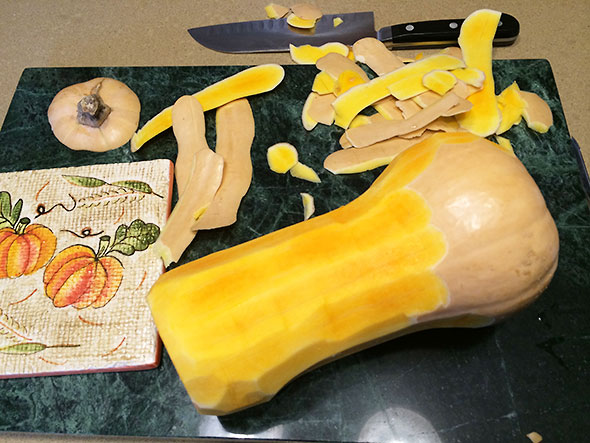 I had two butternuts—purchased in that same visit to Flying Mouse—so I picked up the larger one and began peeling its skin. Butternuts come in several different shapes—some look like swans, others like oversized pears; some look like a pumpkin on a diet. The one I selected was like the latter; its thick neck almost indiscernible from its belly. 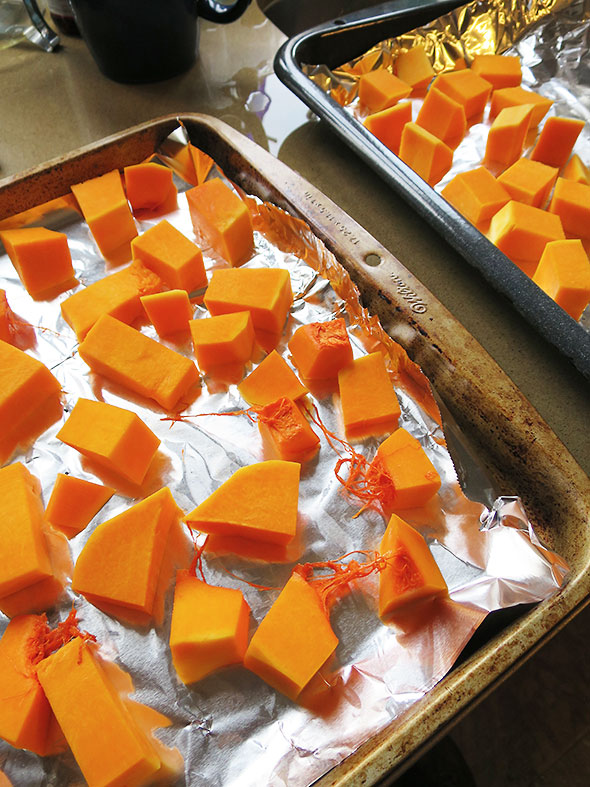 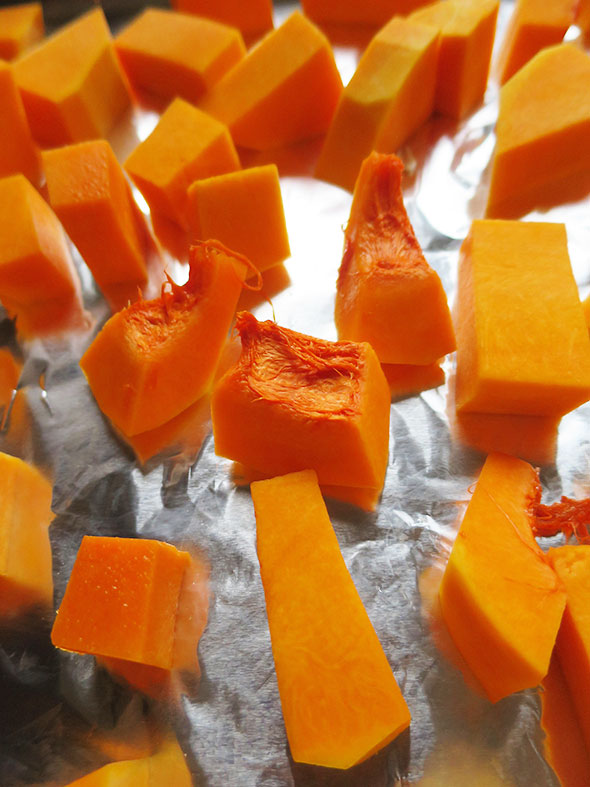 The peeling complete, I then cut the butternut in two. With a sharp knife, I separated the long cylindrical neck from the spherical belly. Belly and neck were placed on end, cut side down, and halved again and then cubed each quarter. I tossed the cubes with olive oil and, with my attentive son’s help, arranged the pieces loosely on two foil-covered pans. The squash piece roasted in a 400 degree oven for an hour. Once they started to caramelize, I lifted the squash from their pans to cool and turned to making the pie dough. 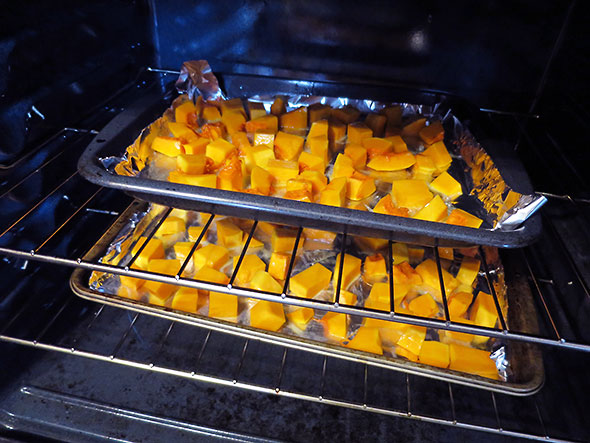 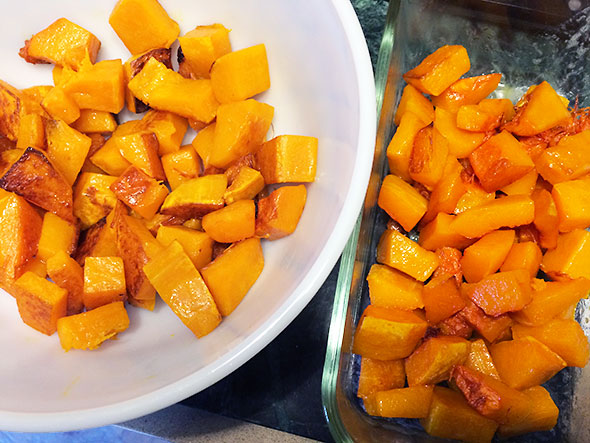 I made enough pie dough for a bottom crust. After letting dough chill for an hour, I rolled it out again with my son’s help and together we fit the circular shape to a pie plate and pricked the dough with the tongs of a fork. I baked the pie crust as described in the New York Times article choosing dried beans to weigh down the crust so it wouldn’t bubble from underneath and lift off its plate. 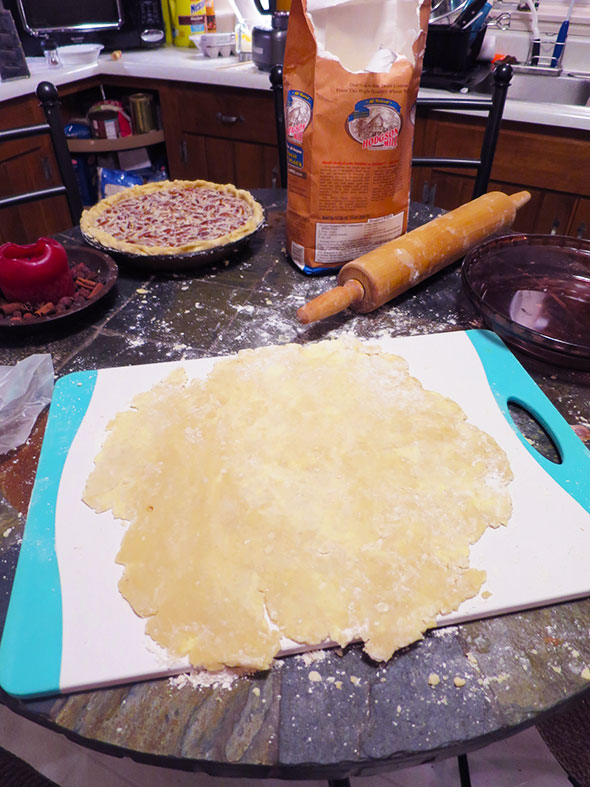 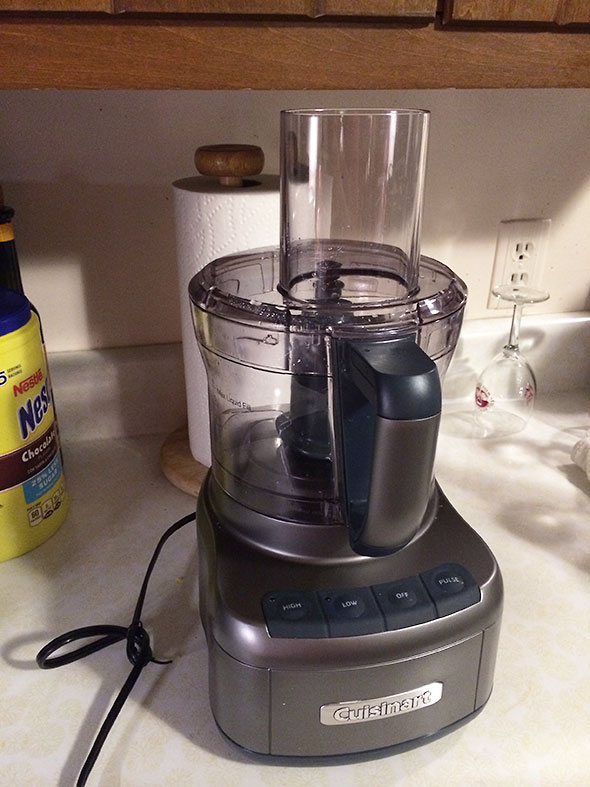 While the pie crust baked on its own in the oven, I prepared the pie’s custard. Last year’s pumpkin pie was a bit meh…OK in texture and color, but missing a note or two in its taste. I took a long look at the New York Time recipe and—with a pantry well provisioned in ingredients—made very little deviation from the recipe’s directives. I puréeing the squash together with 1 cup heavy cream, ¾ cup brown sugar, 2 tablespoons brandy, and an assortment of spices: fresh ginger, cinnamon, kosher salt, nutmeg, and clove. For the brandy, I used cognac—a kind of distilled white wine—and found its contribution pleasing. I tasted the custard as I added spices…in particular the fresh ginger and nutmeg…to gain a satisfying blend. 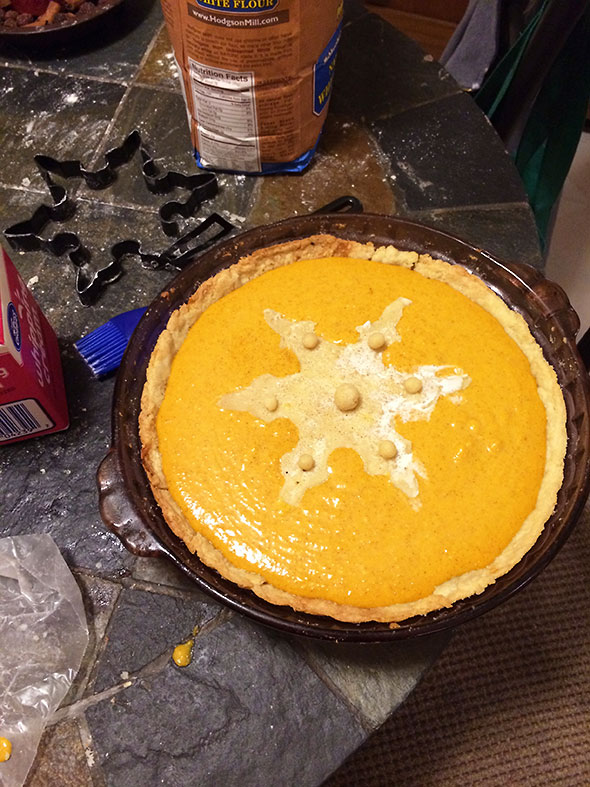 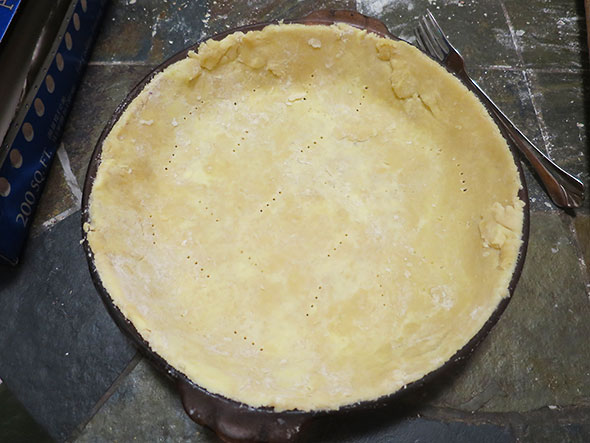 When the pie crust exited its first phase in the oven, I removed the bean weights and replaced them with custard. I had enough leftover pie dough for an embellishment to top the pudding-like custard, so I cut out a snowflake and balanced it on the top. To give the snowflake depth, I added small balls of dough to the snowflake’s center and along its spindles. Finally, I brushed the dough with eggnog and placed the pie back into the hot oven. 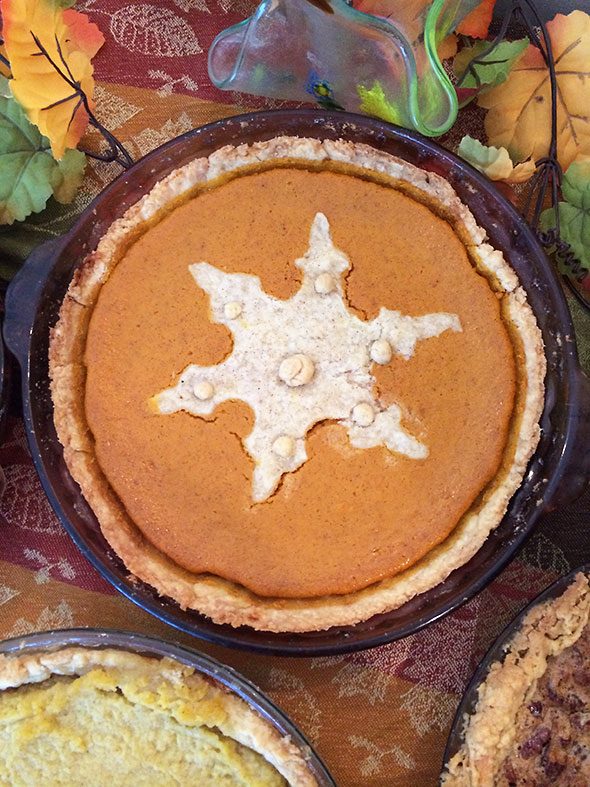 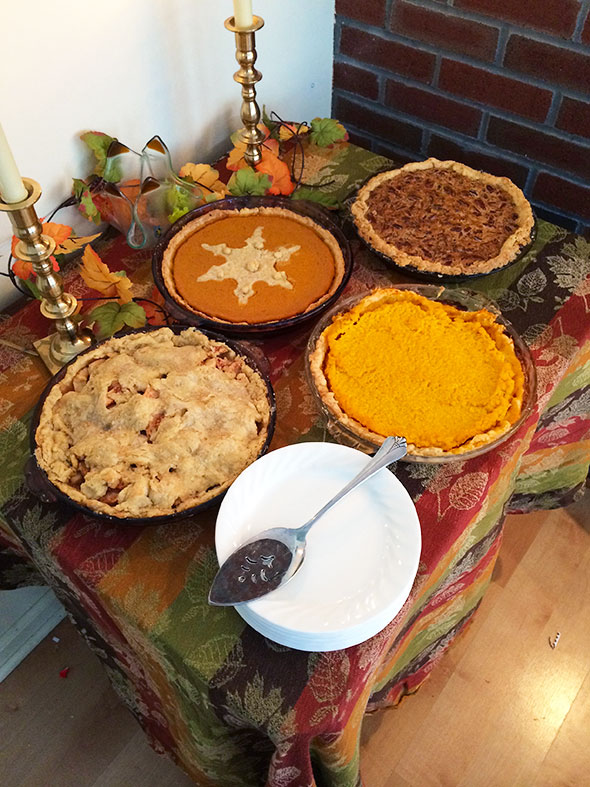 When the pie came out of the oven plump from the heat and blissfully aromatic, I sensed that I had a winner. After chilling the pie and serving slices to my grateful children, indeed I did. The custard tasted like a buttery cheesecake with the zing of ginger and cinnamon. 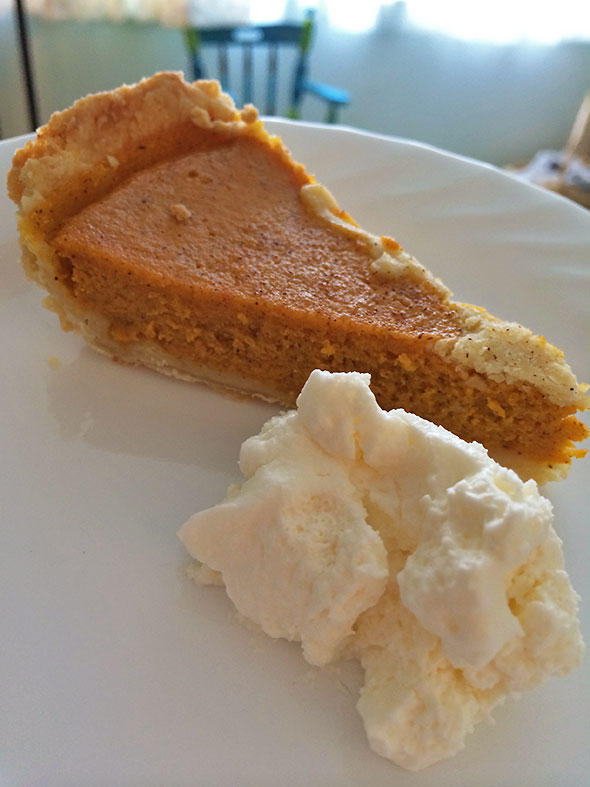 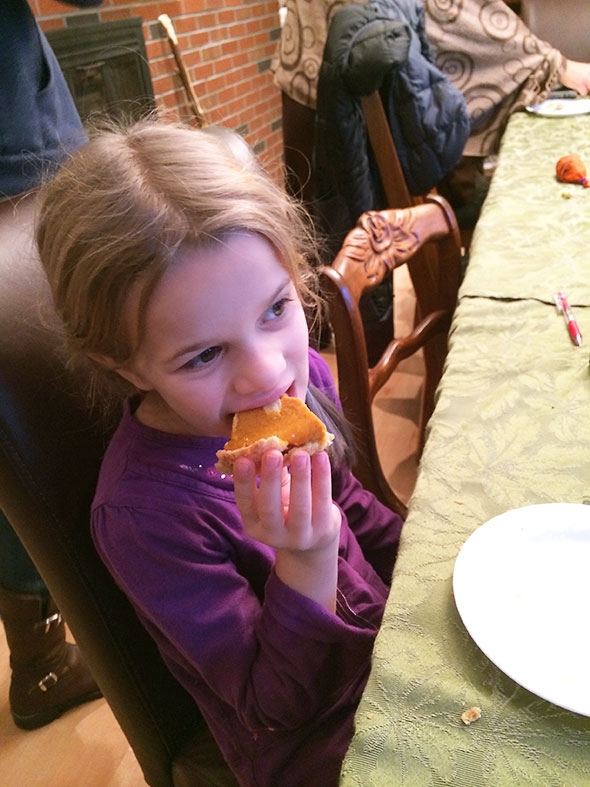 Now, I have to admit that, in the time that I made this one pie, my sister in law Tami made three. Tami’s mother Doris had long ago schooled her children in how to make family favorite dishes. Doris reaps the benefit of her foresight at family dinners to this day. I came to pie making late…in my forties…but, now that I have a winning custard and a winning crust, I also have a son and a daughter. My son was at my hip as I prepared the butternut squash. He helped me arrange the cubed pieces and, later, roll out the pie dough. Together, that man and I put together an excellent pie. I suspect, upon reflection, that our heirloom pumpkin will make as fitting a base as the butternut squash. It is a good thing that my son never got around to giving the pumpkin a name.