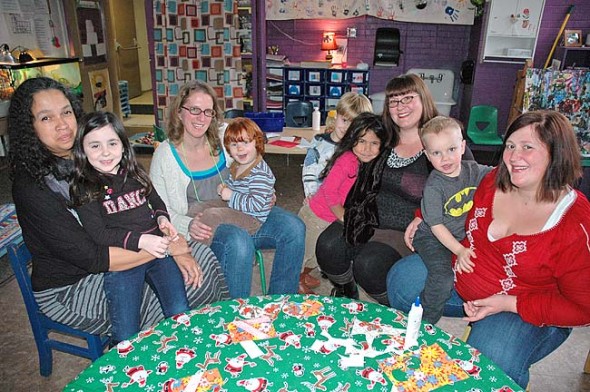 The Yellow Springs Children’s Center has been under severe duress this past year, with unprecedentedly low enrollment, 18 consecutive months of deficit spending, and the prospect of depleting its cash reserves sometime in 2015. The total replacement in September of all eight board members and the near loss of the center’s executive director didn’t help matters. But four months into its tenure at the helm of the 65-year old village institution, the new board has made some progress toward reviving the center and helping it to grow again.

Chief among the plans for forward movement has been a commitment of much needed financial support from a local couple who believes that the Children’s Center serves an essential need in town and that its current leaders have both the talent and the will to bring it back to life. Local residents Maureen Lynch and Richard Lapedes have supported the Yellow Springs public school’s effort to recreate its own education model. And when Children’s Center board members Sarah Siff, Amber Botkin and Pat Brown approached them about providing some leadership for the center, they saw a good opportunity for more local investment.

“Number one is the Children’s Center is a strategic asset for the Yellow Springs community,” Lapedes said last week. “Number two, everyone knows that pre-K early childhood education has been recognized as being very important in later development … and it’s incumbent on us to invest in talented young people with the skill set to start a new institution.” The couple gave an initial donation to “staunch the bleeding,” Lapedes said, meaning cover immediate needs for basic things such as a new furnace to heat the building this winter. And they also committed to sustained support as long as the board demonstrates that they are drafting and implementing a strategic plan to make the center thrive, although they declined to give specific figures. According to Lapedes, he and Lynch aren’t typically so public about their giving, but the Children’s Center was a special case. And they hope others will see it that way too.

“The reason we’re being so out front here is because there’s no time for being politically correct — this job has to be done now,” he said.

The current financial need is clear. With an enrollment that’s declined from about 80 in 2011 to a current 46 students, 30 of whom attend just the after-school care at Mills Lawn, the Children’s Center has continued deficit spending for three years — ending the 2014 fiscal year in July $72,000 over revenue out of an annual budget of $444,000. The center has lived off of its cash reserves the past four months to cover over $10,000 in monthly deficit spending, reducing the fund to around $30,000, according to Siff. And still, the building was in need of repair, and organization was lacking.

According to Siff, though Director Marlin Newell has been an asset to the center in relating to families, her administration has not reacted effectively to the changing needs of the center. Newell is currently on a three-week paid administrative leave and plans to retire this month. “There’s been too little accountability — I just think the local childcare environment has changed and the administration either didn’t recognize it or wasn’t willing to adapt,” Siff said this week. “And having us defend the status quo when the previous board was trying to make a change — it definitely slowed the process down,” she said of the previous nine board members who resigned in September after a special corporation of parents opposed their decision to seek a new executive director.

Newell celebrated her 25th year with the center in May and has served as its executive director for seven years. Reached at home this week, she said that the current board is “working really hard to try to figure things out and take [the Children’s Center] forward.”

Plans for renewal
Chief among its plan to renew the Children’s Center is the board’s need to find a “champion” with the skills and expertise to advise the new board and help choose a new executive director. That was the advice of a Dayton-based early education consultant who also recommended the center close and transfer the organization to a new corporation (refound it), either hire new administrative personnel or outsource management, increase the annual campaign and identify donors who can buy the center time to implement new leadership.

“We’re talking with people with expertise in running daycare and preschool programs and we feel there’s no reason the Community Children’s Center can’t succeed in this space with this facility, staff and its Yellow Springs location,” Children’s Center Board President Steve Siff said in an interview last week.

The board succeeded in securing its first donors to stretch time in a way they need. But while they look to secure an expert advisor, they’re also seeking bids for some facility improvements and writing grants to local foundations that might help to pay for them. According to Steve Siff, the 1957 building has been structurally maintained but never completely rehabilitated as a modern facility. In order to create a safer, more inviting space, the board hopes to tackle several renovation projects, including a more secure entry area that effectively accommodates pick-up and drop-off of students. They also intend to convert the “muscle room” toward the back of the building to a certified infant room, a program the center hosted in the past but which dissolved over the past decade. Plans also include immediately fixing the building’s heating system and adding air conditioning.

Immediate changes to the program will include a new enrichment curriculum for the after-school care program, led by returning Children’s Center teacher Levi Cowperthwaite and incorporating current after school teachers Tamika Jackson and Paris James Jr.

Due to low enrollment and budget cuts, staffing has also changed significantly. During Newell’s tenure, office manager Valerie Fultz and administrator/school-age teacher Robert Campbell were laid off, and several other teachers, including Chelsie and E.J. Waskiewicz, resigned. As the board looks for a new director, returning teacher Samantha Seimer, who holds a master’s degree in educational leadership and a bachelor’s in early childhood education, has volunteered to fill a temporary administrative role, while Andrea Siegel-Hall will continue as the preschool teacher and returning teacher Naomi Hyatt will teach the toddler group. Paulette Hayslip is the kitchen manager, and Mariah Clark, Marcia Greer, Cokie Stello and Rebecca Mascola continue to serve as teacher aids.

According to Steve Siff, the center is pursuing a short-term plan to take care of immediate needs to keep the center operational, as well as a long-range plan to make it sustainable.

“Overall we’re hoping to revitalize the center and bring it up to the standard of a first class daycare,” Steve Siff said. “Given the market and the need for daycare in the larger area, I’m confident we’re positioned well to thrive.”

The case for giving
As Richard Lapedes sees it, Yellow Springs cannot be a healthy community without the full-time early childhood education service the Children’s Center offers. Especially now that the nation has begun to recognize the long-range value of early education, evidenced by the Obama administration’s recent $1 billion combined public and private commitment to improve the reach and quality of the country’s early education system, the time is ripe to get behind this movement, Lapedes said last week.

In addition, the skills and commitment of board members Siff, Botkin and Brown inspired a commitment to not just stabilize the organization as it is, but to “rethink the mission and create a viable useable three-year strategic plan,” Lapedes said.

“These are champions who have identified themselves as leaders who are going to take this on and make something good happen that’s worthy of our investment,” he said.

The value of individual donations, according to Lapedes, is their speed and flexibility to manage a crisis situation, such as the Children’s Center is facing. Those kinds of donations will give the center time to apply for additional support from more formal organizations such as the Morgan Family Foundation and the Yellow Springs Community Foundation. In the end, their support is only leverage.

“They’ve got four months to earn the trust of everyone in the community and make the moves to get both outright grants and launch a campaign to finish the job,” he said.

Along with board vice-president Pat Brown, secretary Danielle Fodal-McCray, treasurer Otto Anderson, and members Botkin, Pat White and Elizabeth Warren, Sarah Siff is grateful for the temporary room to breathe.

“Getting the donation from Richard and Maureen was a real Yellow Springs moment — a humanitarian moment — that people really do care about this place,” she said.

The current board hopes to use it as a platform to encourage more and possibly former supporters to help bring back the Community Children’s Center.

“A lot of the ideas for rejuvenating the YSCCC were shared by former board members, and reaching across the community for support of the institution’s refounding could not be more important,” Steve Siff wrote in an email this week. “We are hoping that former board members will want to become involved again at this exciting time, and the board is also hoping to expand the board with new members in the next few months.”