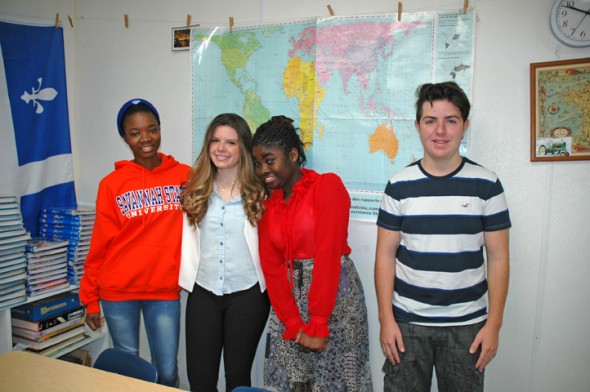 Cultural enrichment for both exchange students and hosts

Yellow Springs High School French teacher and guidance counselor Dave Smith doesn’t know how long the school has been welcoming foreign exchange students into its senior class, but he says the program was “a well-established tradition” when he joined the teaching staff 20 years ago.

A one-time exchange student himself — to France — Smith champions the intercultural program that evolved out of the American Field Service (AFS), which originated at the start of World War I as a group of volunteer, battle-front ambulance drivers. The international student exchanges that eventually followed were an effort to promote peace in the wake of devastating war. Today, the international nonprofit organization operates in 50 countries around the globe.

Four of those countries are represented this school year in the halls of Yellow Springs High School. Attending school here in 2014–15 are Gagnessiry “Gigi” Niang, of Senegal; Andy Soriano Garcia, of Italy; Petrina “Rina” Mac-Lamptey, of Ghana; and Julia Cristovao Cussioli, of Brazil.

Gigi and Rina come from big cities. Gigi is from Thies, near Senegal’s coast; and Rina is from Accra, the capital city of Ghana. Tony and Julia said they come from moderate-size cities of about 100,000 people — Rimini, on the eastern coast of Italy, is Tony’s home; while Sertaozinho, in southwest Brazil, is where Julia’s family lives. Their home languages are French (Gigi), Italian (Tony) and Portuguese (Julia). Only Rina’s country of Ghana speaks English as its national language.

Being transported to a rural village in Ohio, away from family and friends and all that is familiar, takes a lot of adjusting, the students said.. Asked to describe the biggest adjustment in their lives here, Rina spoke for the group: “School … family stuff … friends.” Pausing to glance at the other three, she smiled and added, “everything,” as the others laughed in agreement.

Julia nodded. “Leaving everybody, coming where you don’t know anybody … It’s hard.”

But they all say they welcome the challenge and are glad to have the opportunity to be here. Their goals for the school year reflect more than a list of things to see and do. They show the teenagers’ desires for growth experiences.

Gigi, who expresses discomfort with her English language skills, said, “I want to speak in front of Americans without being afraid.” Julia also said she wants to improve her English, while Tony said his interest is in “trying to introduce myself to a new lifestyle.” For Rina, the journey is personal: “I want to get to know myself better.”

All four said that the school experience is very different from their home countries. For one thing, “it’s easier” here, they all agree. The size and makeup of the student body is also unfamiliar, particularly for Rina, who said her home school has up to 1,000 students, all girls.

YSHS faculty member Smith said that Yellow Springs assigns exchange students to the senior class, regardless of their placement at home, so that they can have the experience of an American senior year, including the graduation ceremony. Nevertheless, each of the four said they will return to their home schools for at least another year before they can graduate there.

In addition to their classroom experiences, all four have become involved in school sports. Gigi plays soccer and basketball, while Julia played volleyball in the fall and is a basketball cheerleader this term. Tony plays soccer as well. Rina also participates in soccer, but clarified her involvement: “I don’t really play; I’m kind of the manager.”

While attending a U.S. high school is a major part of the student’s exchange experience, the other primary piece is living with a host family.

Gigi is living with the Ewald-Orme/Orme family; Tony is staying with the Bridgeman/Amrheim family; Julia is with the Hoagland-Scarfpin/Scarfpin family; and Rina, with the Cathy and Paul Mullin family.

Paul Mullin described the adjustment on the home front as multi-part: “First there’s the novelty phase; then the getting to know each other phase; and then learning to live together.”

While the Ormes have hosted a number of students over the years, the Mullin family is new to the full-year experience. In addition to Cathy and Paul, the family includes Anna, a junior at the high school, and Maxwell, a freshman at Ohio University. Paul said that they had hosted a foreign student for a six-week stay several years ago, and daughter Anna persuaded them to sign up for a full school year. Extended members of their family had also traveled to other countries through AFS and had wonderful experiences, and Paul said he and his wife saw hosting as an opportunity “to pay back the system.”

They haven’t regretted it, he said, noting that the learning is a two-way street. “You don’t really get to know someone from another culture unless you spend time with them.”

The Scarfpins, who host Julia, have gotten to know her whole family. In fact, Julia’s older brother, Pedro, lived with the Scarfpins two years ago. During his stay, his Brazilian family came for a visit. Then, last summer, the Scarfpins, which include YSHS senior Jared and freshman Travis, went to Brazil.

“We spent two weeks with them,” Valerie Hoagland-Scarfpin said. The stay fell during the World Cup, which added more excitement to the trip.

“It’s been a great experience for our family,” she said, adding that the cultural learning extends beyond her immediate family to other family members who live nearby and are able to spend time with Julia.
Smith spoke similarly of the wider effect of the exchange program.

“It enriches the school experience for everyone,” he said.

He noted that four exchange students on campus this year is typical for the school, which also houses the McKinney middle school. “If a seventh-grader met four people from a different country every year until graduation, then they could know 24 people from around the world. … What a cool way to think of the world.”