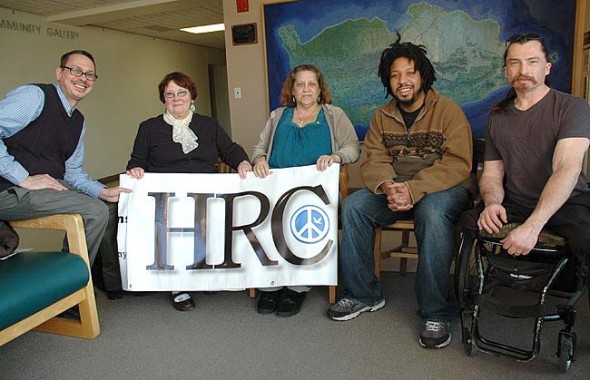 The Yellow Springs Human Relations Commission, or HRC, will host a meet-and-greet with the public next Thursday, Jan. 29, from 7–9 p.m. at Bryan Center rooms A and B. Shown above are HRC members, from left, Brian Housh, Kathryn Hitchcock, Chrissy Cruz, Steve McQueen and Nick Cunningham. (Photo by Lauren Heaton)

HRC member Steve McQueen sees the group as a liaison between the citizens and Village Council.

“In case you’re intimidated by the concept of Village Council, you can come to us and we’ll listen and try to help,” he said in a recent interview. “That’s what we’re here for.”

Whatever the HRC is to its members and to the village at large, the commission has been quite active in the past year, and its members would like to keep it that way. To that end, the HRC is holding a public meet-and-greet event on Thursday, Jan. 29, 7–9 p.m. in Rooms A and B of the Bryan Center. The group wants the public to get a good feel for its mission to support harmony and decrease discrimination and prejudice in the village and award the kinds of grant requests that fulfill that mission. The HRC will introduce its members, talk about recent projects, and invite both 2014 grant recipients and past commission members to talk about their experience and about the history of the commission. The event will also include refreshments.

“We’ve got amazing stories to tell, especially the work that we’ve done this past year,” Housh said in an interview last week. “It’ll probably get a little touchy-feely, but through those stories we will help people to understand what HRC does.”

The Village has had a Human Relations Commission since 1963, at the height of the civil rights movement. Currently just a handful of cities and towns in Ohio have such a relational council, including Dayton’s Human Relations Council, and HRCs for the cities of Cincinnati, Columbus, Youngstown, Bowling Greene, Mansfield, Youngstown and Sandusky. But HRC members believe that the group is a necessary addition to the community and one that preserves its diverse character. Though Yellow Springs has a long history of embracing diversity, the fact alone does not mean that the local culture will automatically stay that way.

Though it may not be pervasive, discrimination does exist here, according to Hitchcock.

“We have some remarkable strengths and we trick ourselves into thinking that we don’t have racial prejudice, but we’re just like the rest of the world,” she said.

According to McQueen, Yellow Springs needs an HRC to make sure it stays a diverse and tolerant community.

“The culture has to be maintained because it can easily crumble,” he said last week. Villagers must be active in order “to remain what Yellow Springs is — in order to maintain the diversity.”

And the HRC not only pushes diversity but also harmony between all people — something Housh feels could be improved in the village.

“I would not say there’s always harmony in our village, and that’s an element that’s critical to HRC,” he said. “But the wind’s blowing in a different direction now!”

The current group of eight members is more active than it’s been in the past, allocating its entire 2014 budget of $10,000, compared to about half that in previous years. The projects included grants to help McKinney School students attend the eighth-grade trip to Washington, D.C., sponsoring a community policing forum, starting an emergency call list of residents with disabilities, helping to make access to broadband communication systems more equitable around the village, broadening the scope of the annual YS Pride events, and helping the National Alliance on Mental Illness Yellow Springs to raise money for two local mental health training sessions for community members and public servants who want it.

One thing the HRC likes to do is provide seed money for programs that help to launch bigger efforts with support from other institutions. The NAMI group did exactly that with the initial $100 seed grant for an initial mailing and printing of brochures, with which the local group was able to launch regular mental health support meetings. The group went on to convince the regional Mental Health and Recovery Board to support local first aid training sessions, which benefitted 22 people at the first session and 50 at a second training.

Another part of the HRC’s mission is to help reduce economic hardship, and the support of the McKinney class trip for families in need fell directly into that category, McQueen said. The group got feedback through a letter from McKinney/YSHS Principal Tim Krier, who wrote, “These mini-scholarships served as tipping points for nine additional families to take the plunge and join their classmates … I am confident that without this YSHRC smartly structured financial support, many of these same students’ families would have chosen to sit on the sideline instead of taking advantage of this really great educational opportunity … In short, thanks to the YSHRC for demonstrating how government can model smart fiscal policy and equity all in one!”

The group has also continued to show commitment to improving relations between community groups, including citizens and Yellow Springs police. The HRC, with help from the Village Mediation Program, organized the local police forum in October to give Village leaders feedback on the kind of police chief the community wanted. And now that a new chief has been hired, the HRC plans to continue to hold policing forums — the next one scheduled for March on the topic of the local department’s participation in the county drug enforcement ACE Task Force and SWAT team. While HRC members were roundly enthusiastic about Police Chief Dave Hale’s commitment to fostering greater familiarity and trust between the department and the community, the group is “still trying to figure out what makes sense in keeping the police and the community together,” Housh said, referring to how frequently the policing forums should occur and what topics should be discussed.

In the recent past, other HRC commissions have organized neighborhood block parties and youth workshops on racism and leadership to promote community building. Former commissions have also supported marriage equality and helped bring about a joint vision for the village skate park. Its activities have always been in support of its charter to “promote mutual understanding and respect among all culture groupings” in the village.

Cruz for one is pleased that Yellow Springs has voted to maintain and fund its human relations support. Especially thinking about other communities that aren’t so fortunate.

“In other places when people complain about the police department, they’re brought to Village Council and nothing happens,” she said. “Here, we have a commission that deals with it.”