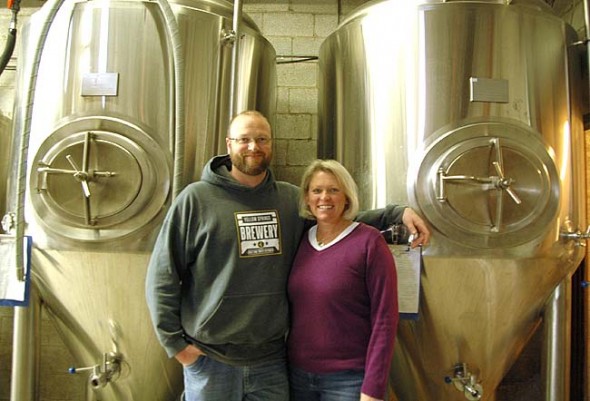 Yellow Springs Brewery owners Nate Cornett and Lisa Wolters will soon be doubling their capacity and adding a canning line at their MillWorks facility. Here they stood with their 15-barrel fermenters, which will be upgraded to 30-barrel fermenters this spring. The brewery started as just a 7-barrel facility. (Photo by Megan Bachman)

Beer, bugs get bigger at MillWorks

A former 19th-century cannery will churn out aluminum cans once again when a local brewery starts canning its beer there later this year. It’s just one sign of growth at the MillWorks Business Center, the former cannery and seed company-turned industrial park, whose owners are working to meet the needs of their nine local businesses.

Recently, several MillWorks businesses have expanded into new spaces at the park, including Yellow Springs Brewery, which in addition to installing a canning line will add more offices and storage and upgrade to new brewing equipment to double its capacity. Another growing MillWorks firm, EnviroFlight, is erecting a new greenhouse and leasing more office space at the business park as it continues research and builds a pilot of its insect-based animal feed system. And S&G Artisan Distillery will release more handcrafted spirits from its new, larger space in MillWorks, which may feature an outdoor patio for tastings.

MillWorks, owned by the husband and wife team of Ellen and Rod Hoover and Sam Young and Sandy Love, has 45,000 square feet of space in nine buildings on four acres and has been completely full for several years. But by shuffling some tenants, not renewing leases for a second brewery start-up and two band rehearsal spaces and renovating unused spaces, owners have recently been able to accommodate the larger employers and growing businesses that they say are a priority at the park.

“We feel that with [these businesses] we’ve been able to keep them not only here at MillWorks, but here in town, so we feel it’s a win–win–win,” Young said.

Departing MillWorks last month was Vitruvian Brewing Company, a brewery start-up that leased a space in MillWorks for three years but never opened at the site. Vitruvian owners Shane and Jacqui Creepingbear said this week they faced a final hurdle to opening from the Greene County Health Department, which demanded significant building renovations before granting an occupancy permit for the tap room. Shane Creepingbear said they are currently looking for a more “move-in ready” location elsewhere, while they leave the space with mixed feelings.

“It was pretty hard and heartbreaking to move out,” Creepingbear said. “But this move will serve us better.”

In addition, month-to-month leases were not renewed for two band rehearsal spaces that were used by local bands Malefalcon, Gin Soaked Angels, Stark Folk and Hyrrokkin. Hyrrokkin, who leased its space for six years according to the band, is currently raising money online to renovate a small shed into a new practice space.

“It was totally just a business deal, which I get, but it’s a bummer there’s nowhere for musicians who are past the point of playing in mom and dad’s basement to rehearse,” said Brett Nagafuchi of Hyrrokkin.

While MillWorks was able to accommodate the bands for several years, especially since they largely rehearsed at night, there was a striking need to help its growing businesses stay at MillWorks and in Yellow Springs, Ellen Hoover said.

“The bands we had were helping occupy the space we did not have rented, and we appreciated them as tenants and performers, but they knew it was temporary,” Hoover said.

The original three-acre MillWorks parcel was purchased at auction in 1991 for $225,000 and opened after an environmental clean up. MillWorks later purchased for $100,000 an adjacent one-acre parcel which is vacant and could accommodate future growth, owners said. Other tenants currently renting at MillWorks are Brown Roofing, Gray’s Earthworks, Huntington Instruments, Kelley Equestrian, Michael Jones Studio and Sculptor’s Emporium.

Brewery to expand production
To meet surging demand for its craft brews, this year Yellow Springs Brewery has plans to more than double its capacity and begin to retail its beers in aluminum cans. In what owners Nate Cornett and Lisa Wolters called a “good problem,” the nearly two-year-old brewery has never been able to brew enough beer to satisfy thirsty patrons in its tap room and in area bars and restaurants.

“The demand was greater than we dreamed it would be,” Wolters said.

The brewery is set to grow from a seven-barrel to a 15-barrel brewhouse when new equipment arrives this spring. That will allow the brewery to keep beer flowing into its successful taproom, which is the bulk of the brewery’s business, and start to distribute more beer to bars and restaurants in the region, which the brewery initially planned.

“The number of folks coming to our tap room did not match what our plans were — we thought we would be 85 percent wholesale, but it’s flipped,” Wolters added.

Currently, Yellow Springs Brewery sells its beer to around 100 bars and restaurants in the Dayton and Columbus areas, with a few accounts in the Cincinnati area. With new equipment and more frequent brewing, it hopes to increase beer production from 700 barrels last year to 5,000 barrels by next year. The brewery received a bank loan for its expansion.

Yellow Springs Brewery is also growing its footprint in Millworks, where it is adding 1,700 square feet from the former Vitruvian space for offices and storage. Yellow Springs Brewery now occupies nearly 7,000 square feet at MillWorks. No changes are planned for its tap room. The brewery currently has 16 employees, most of whom are part-time taproom servers, while it has one full-time brewer and two part-time production workers who will likely become full-time employees when the new system is on-line.

Later in the summer, the brewery hopes to set up its canning operation and begin canning its most popular and well-respected brews, which currently include Captain Stardust Saison, Zoetic Pale Ale and Wobbly Wheel IPA. That way, the brewery could break into the retail market, which it has yet to do.

“You can only sell so much draft beer,” Cornett said of the plan. Previously, the brewery has sold three limited-edition bottles from its taproom and will release another on Fat Tuesday, Feb. 17, a Belgian sour ale called Bromancing Bastogne.

On choosing aluminum cans over bottles, Cornett said it’s a choice better for craft beer since it better preserves the flavor because cans protect the beer from light and result in a lower dissolved oxygen content. While the environmental benefits of cans over bottles are not clear, Cornett said they are lighter to ship. However, since they have to order several hundred thousand cans at a time, the brewery has had to find additional storage space off-site.

The brewery’s troubles keeping up with demand started just six weeks after it opened, when the business had to close the taproom to brew more beer. Only the second brewery in the Dayton region when they opened, YS Brewery quickly gained a large following and its brand only grows even though there are now 11 breweries in Dayton, owners said.

“When you make good beer, you earn the respect of your peers,” Cornett said.

Wolters added that they love the location along the bike path and that with the new upgrades and expansion they will be able to “make a lot of beer in this building.”

“We love being here in this location,” Wolters said. “We want to remain small and mighty, that way we can respond and be fairly creative … that keeps us excited and motivated”

EnviroFlight expands
EnviroFlight is in the midst of a $3 million expansion at MillWorks aimed at eventually commercializing its proprietary insect breeding and feeding facilities, according to a November 2014 article in the Dayton Business Journal. At MillWorks, where the company was founded by Glen Courtright in 2009, EnviroFlight is renovating a production area so it can process six tons of material a day into animal feed and adding new office space, according to the article. The firm now has 20,000 square feet at the park. A new greenhouse is also being erected at the site to house breeding flies.

Representatives from EnviroFlight declined to comment on changes at their facility.
Currently, EnviroFlight produces animal feed from black soldier fly larvae and sells it to zoos across the country, according to previous articles in the Yellow Springs News. EnviroFlight has also partnered with the U.S. Department of Agriculture to test insect feed formulations for farm-raised fish.

Last year a $600,0000 grant request through the Ohio Capital Appropriations Bill to renovate the former art building at Antioch College for production facilities was denied.

Distillery to grow in new space
S&G Artisan Distillery, which started selling its first product — Apple Pie Moonshine — out of its MillWorks tasting room in fall 2012, is looking forward to tripling its production space and doubling its tap room at MillWorks.

Owners of the small craft distillery that also sells rums, liqueurs and schnapps are Meg and Steven Gujer of Sugar Creek Township and Hajo and Kerry Scheuner of Xenia.

S&G will take over a large portion of the former Vitruvian space while keeping its current production area in a move that increases its production footprint from 1,000 square feet to more than 3,000 square feet. That will allow the company to produce, and sell, more bottles of liquor at more state stores. As Meg Gujer put it, “we want to make more to sell more.” Currently, its Apple Pie Moonshine is sold in a few dozen stores across the state, including at the Emporium in Yellow Springs.

An adjacent space in MillWorks will serve as the new tasting room for S&G and accommodate more tasters who can better interact with bartenders, and each other.

“The space will be larger so it provides more of a social gathering,” Gujer said this week. “We need more room for people to belly up to the bar.”

The distillery is allowed by state law to sell no more than four quarter-ounce tastes to each customer per day, so Gujer doesn’t think patrons will stay much longer. But they may enjoy their time more, especially with the possibility of an outdoor patio. She added that moving closer to the brewery and its food trucks will allow for more synergy between the two alcohol-producing establishments.

Last summer, S&G expanded its product line to include a higher proof Apple Pie Moonshine, an Italian walnut nocino, three rums and a rum-based version of ouzo, an anise-flavored apertif, all of which are sold on-site in its tasting room. New products in development are a honey liqueur, a blackberry liqueur and a raspberry liqueur, which are all produced using fruit and honey from area farmers.

As it gears up its production, S&G recently invested in a second still, a 26-gallon pot still that is more versatile compared with its boiler still, with plans for more equipment as the company grows. Since the process for selling its product in state-controlled stores can take months, a popular tasting room is important to business and to teach people about the process.

“We really take the time to explain our products, which is the added touch that S&G provides,” Kerry Scheuner said.