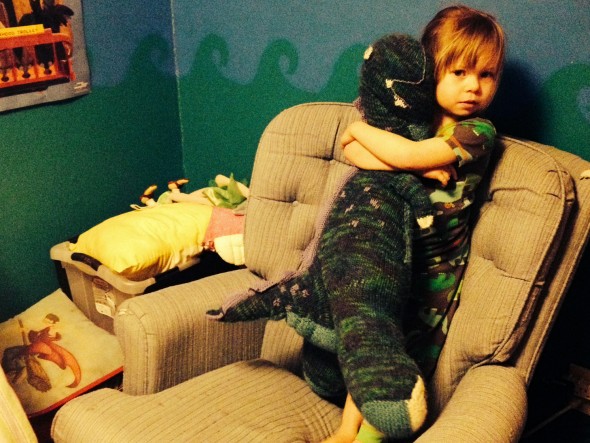 About a year ago, I wrote a piece about how my daughter, Lucy, was obsessed with Disney’s “Frozen”; specifically, I wrote about her love for the film’s big number, “Let It Go.” It was around that point that the entire world just about lost its cotton-pickin’ mind over “Frozen,” to the point where I was not only inundated with hearing the Idina Menzel mega-hit in my own home, but also literally anywhere else I might go. I remember being particularly incensed at hearing it while waiting in line for a ride at Kings Island last summer, and thinking, “This isn’t even a Disney theme park!” At which point, at least half of the 300 people in line started singing along. I guess what I’m saying is, it’s a popular tune.

Now, as we venture into 2015, I’m happy to say that, although Lucy still occasionally hums the chorus to herself around the house, it looks like her particular case of Frozen Fever may have just about cleared up.

Of course, this may only be due to the fact that she’s moved on to a new song.

Let’s take this thing back in time for a minute.

The following video is not of my middle school band, but this is near to what “Theme From Jurassic Park” would have sounded like the first time I heard it:

Sitting there that day, in the cafeteria of Merritt Brown Middle School, between my parents and sister, I stared hard down at the program in my hands, trying my best not to cry. It was the most beautiful thing I’d ever heard in all my 12 years. Not long after, I actually saw “Jurassic Park” for the first time, and heard the piece as (sorry, middle and high school bands) it was meant to sound.

If you’re not familiar with the movie, here are a few spoilers for you: paleobotanist Dr. Ellie Sattler and paleontologist Dr. Alan Grant are flown to the secluded Isla Nublar by eccentric old rich guy John Hammond, who tells them he’s got something real cool to show them, but won’t tell them precisely what it is. (Side note: never agree to get into a helicopter with somebody who won’t tell you why, because somebody is definitely getting eaten if you do.) Jeff Goldblum is also there, playing a chaos theorist, which is something you apparently need on a dinosaur island. In this notorious scene, the island guests get the big reveal:

This scene blew my pre-pubescent mind: that beautiful score builds in the background as the Brachiosaurus rises up on its hind legs and then descends, hitting the ground with a rumble just as the theme reaches its most triumphant note. Dinosaurs, just as they should have looked. The beauty of this moment, not to mention the angst borne of being an almost-teenager, had me struggling not to cry, as I had done at the band concert.

What is it about kids and dinosaurs? Have you ever met a kid who wasn’t totally fascinated by the idea of giant lizard creatures ruling the earth? Dinosaurs are the mythological pantheon of grade school: there is the benevolent, long-necked sage, the Apatosaurus; the cunning trickster god, the Velociraptor; and, of course, the tyrant lizard king himself, Tyrannosaurus rex. Dinosaurs are the stuff of legend, and only their stories remain. Well, and their bones, which are a bonus, because kids also love dead things (see: mummies, ghosts, dessicated bugs on the bathroom floor).

My love for “Jurassic Park” was rekindled a few years back, when the film was re-released in theaters in 3D to mark its 20th anniversary. I saw it with my husband on a rainy evening; our daughter was at her grandmother’s house, and because it was a weekday, we were the only two people in the theater. When we got to that scene, the one I mentioned before, this time I really did cry, because we were alone, it was dark and I had 3D glasses on.

I bought the DVD not long after that, and it’s one of those movies that I pull out on gray days or at night when I can’t sleep. And when I do, I find that I’m always humming the score for a day or two after that. My daughter, like myself, has the habit of chronic humming, and so it didn’t take her long to start humming it, too. Then she wanted to know what the song was. Then she wanted to watch the movie.

If you don’t know, the movie’s second and third acts concern the proverbial crap hitting the fan: the dinosaurs get loose, a person or three gets eaten, we learn a little lesson about the hubris of man, and then everybody that hasn’t been ingested legs it off Dino Island to safety. Because of this, I had my reservations about letting Lucy watch it, but as it turns out, my reservations are weak: if somebody asks me to turn on the dinosaur movie, you better believe I’ll turn on the dinosaur movie.

Lucy and I have watched “Jurassic Park” a few times now, but she never makes it much further than the part when the T. rex gets loose. By that point, the magic is kind of gone for all the characters, who are now fighting for their lives, and Lucy isn’t much interested in the whole human drama thing. Except for the part where one guy gets eaten on a toilet; she found that intriguing. Incidentally, she wanted to know why the dinosaurs ate the people.

“Because some dinosaurs like meat,” I said, “and people are made out of meat.”

“I thought you said we were made out of stardust?” she pointed out, repeating something I’d previously appropriated from either Carl Sagan or Joni Mitchell.

But I can see why she loses interest, I suppose; I love the entire movie, even the scary parts, but for me, the whole experience is really wrapped up in the scene where they first see the dinosaurs. I still cry 100 percent of the time I watch it, but I think it’s for a different reason now than when I was a kid. Back then, it was the music, and what were at the time (and still are) awesome CGI and practical effects. I’m still impressed by those things, of course, but these days I find my attention focused a lot more on the two adult dino-scientists. You can read it in their faces: the moment they see that dinosaur, they’re children again. Everything they worked for, their whole professional lives, are basically reduced to nonsense in that moment, but what do they care? Their awe is such that they have to dramatically take off their sunglasses. It’s the legend of grade school, finally come to life before them. The doctors and I sit and watch, and we’re all kids, the wonders of the universe alive. For the record, there are a couple of kids in the movie, but their “shock and awe” moment happens next to a giant pile of triceratops poop, and their role in the story is really just to up the dramatic ante and give Dr. Grant a mild first case of the baby blues. “Jurassic Park” knows its identity: it’s a kid’s movie for grown-ups.

Lucy probably spends at least a cumulative hour a day humming “Jurassic Park” as she goes about her very important 4-year-old business. It can get repetitive, a little annoying. But I do occasionally get a smidge weepy at the silly, nasal sound. Sure, I guess I’m weeping for my lost childhood and all that, you can’t go home again, etc. etc. But there’s also the joy of knowing that, for her, it’s all still real. Everything is stardust.  And meat.

* Listen below to Lucy’s humming prowess. It’s audio only, since the only way I can catch her doing something cute is with my phone in stealth mode.