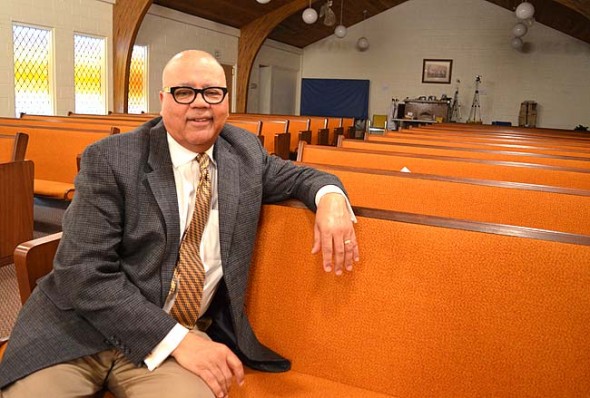 The Reverend Dwight Smith is the new pastor at the historic Central Chapel AME Church, a local congregation founded in 1866. Smith, who lives in Dayton, was a television news broadcaster before answering the call to ­ministry. (Photo by Megan Bachman)

Twenty years ago, a television news broadcaster eschewed the bad news of local TV for the “good news” of Jesus Christ. Now he takes the pulpit of the Central Chapel AME Church, one of the village’s oldest churches.

“I turned in my microphone to preach the Gospel instead,” said the Reverend Dwight Smith, the new pastor for Central Chapel, which was founded in 1866.

Still a “news junkie,” Smith brings current events into his sermons but most Sundays preaches a message of “uplift and hope,” he said.

“Every now and again I might do fire and brimstone, but most people come in here from whatever experiences they have during the week looking for something to keep them going,” Smith said.
Smith was appointed in November to replace Timothy Liggins, the church’s pastor since 2011, who is starting a new church in Columbus.

Smith was the pastor at Trinity AME Church in Springfield for 14 years before coming to Central Chapel. Though Smith didn’t choose to switch churches (AME pastors are appointed by the presiding bishop in their district) he was excited for the opportunity to lead a church with such a rich history.

“What keeps me going is knowing the legacy and all that the people before me have done,” Smith said. So far, he finds church leadership engaged and competent and says parishioners keep him on his toes by listening closely and giving him feedback on his sermons.

Smith, who lives in Dayton with his wife, Leslie Young-Smith, is also a part-time chaplain at Upper Valley Hospital in Troy, an experience that greatly informs his ability to help people during moments of crisis, he said. From that work, Smith has learned to “meet people where they are,” address their spiritual health and ultimately help them forgive themselves, he said.

Smith graduated from Payne Theological Seminary in Wilberforce in 2006, completing his thesis on using spirituality to treat post-traumatic stress disorder at the Dayton Veterans Medical Center, where he was a chaplain resident. Smith previously had careers as a broadcast journalist and television station account executive. A lifelong AME church member, Smith grew up in Indianapolis, Ind. and first came to Dayton in 1979 as a weekend news and sports anchor for WDTN-TV. He later worked in television management at WHIO-TV and WKEF-TV in Dayton.

After moving from Dayton to Louisville in the late 1990s for a broadcasting job that fell through, Smith realized that it was faith in God that had helped him through hard times. Even after losing his job, Smith was somehow able to provide for his family, which he attributed to God and which is summarized in his favorite scripture, Psalm 37:25:

“I was young and now I am old, yet I have never seen the righteous forsaken or their children begging bread.”

On a recent Sunday, Smith used the first chapter of the Gospel of Mark to discuss the issue of “Overwhelm” and the importance of being recharged by one’s community. According to that Bible verse, when Jesus left his disciples to travel around healing people, he was criticized by them, but was strengthened by God, a lesson that Smith believes parishioners can take to heart.
“If you’re going to help people, you’re going to be criticized, but because of our faith, you will find strength,” Smith recounted of his sermon. “So it’s important to get away when you’re overwhelmed, to get refueled and that’s where the importance of community comes in.”

Smith said he probably uses the word community every Sunday because it’s so essential to what a church is. He said the importance of the church community is in “lifting each other up, sharing in our joys and mourning our sorrows.”

Of the current community at Central Chapel, Smith said there are officially around 100 members and about 50 people (members and non-members) attend the Sunday service. Central Chapel shares the struggles of other mainline Christian denominations in its aging population and declining attendance, he added. It’s his charge to “recruit young people who can pick up the mantle right away,” Smith said, and will start that work through the church’s youth organizations, by exploring ideas like a “Friday Night Live” service aimed at younger people and better utilizing the church’s Family Life Center to meet the needs of young families. He is also leading a weekly Bible study at the church to expand opportunities for involvement.

Smith also believes he can attract more members by forging authentic relationships in the church community. During his first Sunday service at Central Chapel, Smith surprised worshippers by walking through the pews during the final hymn to shake everyone’s hand and invite them to join the church or give their life to Christ, he said.

“I didn’t want to put pressure on people, but as human beings we’re relational,” Smith said.
The African Methodist Episcopal Church had its beginnings in the late 18th century, when a group of African-American parishioners withdrew from a Philadelphia Methodist church because of restrictions placed upon when and how those of African descent could worship. The church was officially founded in 1816 and still today is centered on “human dignity and standing up for those who are at the margins of society,” Smith said.

According to Central Chapel’s history, in 1866, as the area’s educational opportunities continued to attract African Americans three years after the Emancipation Proclamation, 13 people from Yellow Springs and Miami Township formed a local chapter of the AME Church in a schoolhouse on what is now Ohio 370 near John Bryan State Park. By the turn of the 20th century the congregation had built a one-room church on South High Street referred to as Central Chapel, had local landowner and freed slave Wheeling Gaunt as a member, and was serving the spiritual needs of a growing local African-American community.

The church continues to serve the needs of the local black community, while it remains open to anyone who wants to join for a chance at redemption through community, Smith said.

“There is nothing Biblically that says if you become Christian everything will be alright,” Smith said. “You will have trials, tribulations and tragedies, but in that suffering there is a chance for redemption, for restoration. It’s not easy, which is why you need community, to support one another.”

One Response to “New face at AME church”