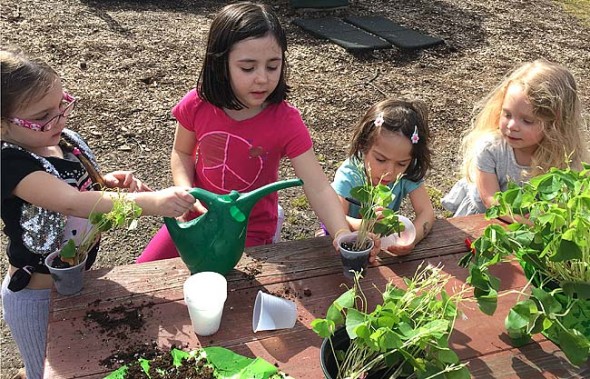 Students at the Yellow Springs Community Children’s Center, from left, Brooklyn Markgraf, Neveah Plambeck, Dylan Cole and Lilly Brown, planted shamrocks in the school yard on Monday in celebration of St. Patrick’s Day this week. The center is working hard to recover from several years of financial hardship and has recently welcomed two new interim directors and five new board members, all with extensive nonprofit management experience. (Submitted photo by Andrea Seigel-Hall)

When Levi Cowperthwaite returned to the Yellow Springs Community Children’s Center this winter to run the After School Care Program at Mills Lawn school, she found a lack of programming and flagging student enrollment. So she talked to the after school teachers and they created an engaging schedule of workshops, including sewing, cooking, dance team, singing, gardening and wacky science. Within two months, the program had an alternating schedule of educational activities that boosted not only overall enrollment but also average daily attendance.

The Children’s Center sustained a rough blow last fall when it lost its board of trustees and soon after its administrative team, along with some staff. And the process of bringing the school from the brink of insolvency over the past six months has not been without its challenges. The center recently lost another handful of staff members, some of whom had stepped in to try and help the Children’s Center recover. But to Cowperthwaite, the affordable, all-day early childhood education that the school has long offered is too vital to the community to abandon.

“If the village wants to attract young working families, we have to be able to provide affordable childcare,” she said in an interview this week. “It’s important to serve the needs of the community, but the Children’s Center also affects the culture of the village by defining who is able to be here.”

Children’s Center board Chair Amber Botkin agrees, which is why the board recently welcomed five new members with extensive nonprofit leadership experience to guide an organizational rebuilding. The board also hired two part-time interim directors, Toni Dosik and Karen Wolford, whose careers have been spent leading and rescuing nonprofit organizations around the region and the country. While Dosik, former director of four nonprofits and currently a nonprofit consultant, and Wolford, director of the Yellow Springs Senior Center, together serve only a part-time leadership position, they have full confidence that the staff already in place has the skills to sustain the school while the board prepares to hire a permanent executive director in the next two to four months.

“We’ve both run these kinds of organizations before — we know what we’re doing,” Dosik said on Friday, their fifth partial day on the job. There is a lot of work to be done at the center, both agreed. But they each noted a sense of legacy, passion, and “magic” about the Children’s Center they believed would carry it forward.

“For us, in five days, to have experienced that, is a testament to the fact that there is a solid foundation here,” Wolford said.

New leaders on board

Last Friday, Dosik and Wolford were buzzing about the Children’s Center gathering information, interviewing staff members, and assessing the state of affairs. Both versed in appreciative inquiry, a system of organizing around an institution’s strengths, they quickly identified a host of tasks to increase the center’s efficiency and facilitate daily operations for its toddler, preschool, and after school programs, as well as the administrative process.

Dosik has been in this situation many times in the past, having come in as the leader of several organizations on the cusp of financial ruin. And she’s always been able to resurrect them, she said. “This is the fourth organization that was in dire straights when I stepped in,” she said.

“I’ve been in the nonprofit business a long time, including several on the brink of disaster, so this is just par for the course,” Dosik said. “This doesn’t scare me one bit.”

Wolford has led the Senior Center for two years, before which she served nearly 20 years as executive director of the Girls Scouts of Western Ohio. She has extensive experience in both fundraising and strategic planning and operations management.

And though neither person plans to be at the Children’s Center often nor always at the same time, they developed a deep trust in each other’s decision making abilities working together last year on a Senior Center project. They are confident they can work seamlessly to guide the staff and prepare the center for a permanent director.

The board has also received an infusion of new energy from members with extensive experience in nonprofit leadership. The board recently welcomed former Senior Center Director Rodney Bean, retired Wright State University faculty member Larry Turyn, Glen Helen Association and Friends Care Center board member Bill Kent, Community Foundation board member Bruce Bradtmiller, and Lisa Abel, who acccording to Botkin, has served on every local board with the word “community” in it. They join board members Botkin, Daniele Fodal-McCray, Pat White, Pat Brown, Otto Anderson and Sarah Siff, all of whom joined the board last September, when the previous board resigned over disagreement with parents about the need to hire a new executive director.

“We have a bang-up team to work on the challenges at the Children’s Center, and we’re going to do it,” Botkin said.

The board’s most immediate goal is to profile and hire a permanent executive director with a search committee of Abel, Dosik, local school teacher Lynn Sontag, Mills Lawn Principal and After School Care partner Matt Housh, Little Art Theatre Board member Maureen Lynch, and local resident Beth Rubin, who heads the Greene County Department of Job and Family Services, the center’s licensing agency. According to Botkin, the board wants a director with nonprofit business experience, including personnel, budgeting, reporting and licensing management skills. Experience in early childhood education is a plus, but the educational programming could be managed by someone else with expertise in that field, Botkin said.

The board will also focus on learning  to work together effectively, including how to make policy decisions without getting involved in daily operations. And though perhaps lower on the priority list, structural changes are also part of the board’s focus. According to Bean, for instance, the bylaw that allows a majority parent group to overrule the board of trustees (which led to the resignation of the entire board in September) is a deterrent for board members and should be reevaluated. The bylaws also allow for a board of up to 15, but Bean believes a smaller group with broader experience would be more effective.

On the ground at the Children’s Center, another round of staff has recently left the school. Six teachers and administrators left last fall after the board pressured then-executive director Marlin Newell to resign and in September announced that deleterious deficit spending was likely to deplete the center’s cash reserves by May 2015. The board allowed Newell to go on paid leave until her official retirement in April, and last fall the board hired former teachers Sam Seimer and Carmen Lee and experienced nonprofit director David Scott to manage finances and oversee the remaining 13 full- and part-time teachers and staff members, Siemer said in an interview last week. Enrollment was down to a low of less than 30 students, where it has stayed. The after school program is counted separately and is the only program that has grown slightly since the fall.

But feeling overworked and disempowered as a director, Seimer resigned last week, followed by two other teachers. Scott had resigned earlier in the winter. During the transition, Board President Steve Siff also resigned after getting a job out of town.

Though leading the Children’s Center was the kind of work she wanted to do, Seimer leaves the organization feeling hopeful for its future. The new board members bring a lot of experience the center needed, and the community has shown great will to ensure the historic school continues, she said.

Indeed, an influx of local donations have given the organization time to work out its kinks. In December, local philanthropists Maureen Lynch and Richard Lapedes agreed to lend support to the center, which they believe is itself a critical community asset that serves the important function of early learning. Because the leadership has brought more stability to the center, the family has agreed to continue its support, Lapedes said last week.

The Children’s Center annual campaign brought in $10,000 this year, a larger sum than is typical, Botkin said. And the Yellow Springs Community Foundation also furnished a $10,000 grant for building renovations, including remodeling the entryway and repainting.

“There is no doubt, if we didn’t have the support of the community, we wouldn’t be here,” said Botkin.