While it’s sometimes wise to avoid sitting in the front row at a comedy show, Leighann Lord will share laughs — not attacks — with her audience at a local fundraiser this weekend for a 93-year-old private school. The New York City comedian’s stand-up routine touches on everything from aging parents to dating after divorce, but it’s not mean. Instead, everyone will be laughing together.

“The closer you are, the more fun you’re going to have,” Lord promised. 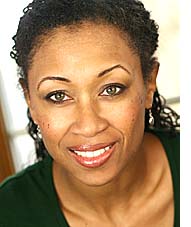 Tickets are $55 per person and include entrance to the comedy performance, live and silent auctions, dinner and wine. To RSVP, call 767-7642 during school hours. Tickets will also be sold at the door. Almost 100 items from local and area businesses will be auctioned off at the event, including overnight stays at local B&Bs, gift certificates for restaurants and health and wellness services, local artwork and vacation rentals in California, Michigan and Hawaii. In addition, a cow that once adorned the top of the Two Clown’s Mowing truck will be up for bid.

Lord is a popular guest co-host of Neil de Grasse Tyson’s “Star Talk Radio” and has appeared on television in Lifetime’s “Girls Night Out,” The Original HBO “Def Comedy All Star Jam,” ABC’s “The View” and Comedy Central’s “Premium Blend.” She received the NYC Black Comedy Award for “The Most Thought Provoking Black Female Comic” and was Harlem Week’s official comedian for two consecutive years.

While all comedy makes fun of someone or something, Lord said her comedy is not hurtful. Instead she takes comedian George Carlin’s advice to “never punch down, you always punch up,” she said. Lord takes comic inspiration from Carlin, Rita Rudner, Franklyn Ajaye, and more recently she has avoided politics in favor of more personal subjects, she said.

“I used to do political humor until the world stopped making sense,” Lord said. “I registered to vote as an independent because I didn’t know the difference [between Republicans and Democrats], and I watch Fox and CNN so I can be equally misinformed on a variety of subjects.”

With more than half of the Antioch School’s 53 students from pre-school to sixth grade receiving a scholarship, the annual fundraiser is critical to make sure those families who want an alternative education for their children can afford it, according to School Manager MJ Richlen this week. For nearly a century, the school has had no test or grades. Instead, children learn at their own pace in a “natural” learning process.

“We believe that children are natural learners,” Richlen said. “It’s not about the grade at the end of the quarter, instead we want it to be an internal process where the child is pleased to learn. Learning a wonderful journey — it’s not about stickers or grades.”

The cost to attend the Antioch School is $9,503 per year, which includes tuition and fees. While the cost is considerably less than other non-sectarian private schools, according to the National Center for Education Statistics, it’s also out of reach for many families struggling since the economic downturn, Richlen said. The goal of the comedy show and gala is to raise around $30,000 towards its $50,000 annual scholarship fund campaign, which directly helps local students, according to Development Coordinator Liz Griffin (two-thirds of the school’s students hail from Yellow Springs). It also helps keep one of the country’s oldest democratic schools alive, she said.

“People think it’s just a private school down the alley, but our history is so rich,” Griffin said.

The Antioch School’s roots stretch back to the founding of Antioch College by Horace Mann in 1853 when Mann created a preparatory academy to feed students into the college. When Arthur Morgan re-organized Antioch College at the dawn of his presidency in 1921, the Antioch Preparatory Academy was re-named the Antioch School and was re-conceived as a laboratory school to pioneer progressive teaching methods, a training ground for Antioch education majors and a high-quality school for the children of college faculty.

Today, the educational philosophy at the Antioch School is largely unchanged, with a curriculum built around student interest, creative exploration and free time. What was experimental one century ago has become a proven way to prepare children to be responsible, self-directed learners for the rest of their lives, parents and teachers have said. As a parent of two Antioch School students, Griffin has seen the impact of an Antioch School education. In fact, it was the school’s unique approach to education that led Griffin and her husband to move to Yellow Springs several years ago.

“Kids can pursue the things that are most interesting and intriguing to them,” Griffin said. “They were learning so much through their play and were accomplishing more than what a teacher could set up for them in a day.”

At the Antioch School, the teacher is more like the “wind in the sail” while the child “guides the boat,” Griffin added. The schools’ symbol, the unicycle, captures this philosophy well, since riding a unicycle cannot be taught — it’s something students have to learn on their own.

“That’s the way that a lot of life lessons are — you learn it, love it, fall down and get back up again,” Griffin said.

This year the Antioch School hopes to raise $85,000 of its approximately half-million dollar budget, since tuition revenues don’t cover the school’s operating costs, according to figures provided by the school. In recent years the Antioch School has also worked hard to keep costs low by depending on the families of students to volunteer 20 hours each year at the school, and it hasn’t raised tuition or staff salaries in two years, Richlen said. After the financial crisis in 2008, private school enrollment dropped nationwide. At Antioch School enrollment is also down, with an ideal population of about 65 students, she added.

Despite the struggles, the Antioch School has persevered before, and will again, school officials said. The town, not to mention the world, still needs the Antioch School, its supporters believe. On the subject, Griffin relayed the words of Antioch School director Hida Hughes, who said in 1946:

“The primary aim of The Antioch School is to create out of each child the best kind of being he can be and to make him as effective and dynamic as he can be in building the future of the world.”