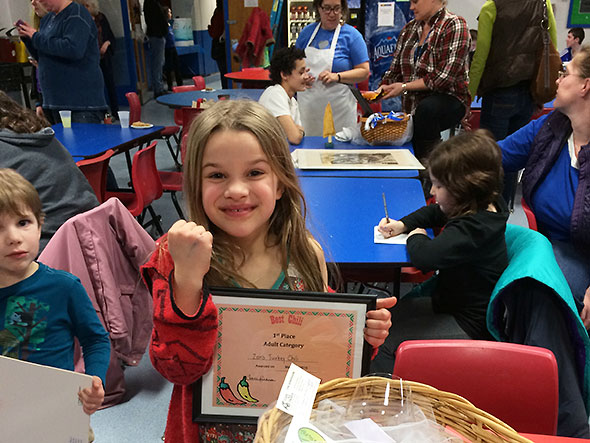 Jeremy told me, “I’ll make the chili, you serve it.” Chris Wyatt, fellow locavore and defending champion of the McKinney Chili Cook Off, sent us an invitation to the 21st annual event. With a week to go, Wyatt was stirring the pot teasing his competitors with tantalizing details of his homemade brew.

Last year, I was wondering if I could convince my husband to enter. This year, Jeremy was ready to stir up the competition himself. Unlike the wise Dr Wyatt, Jeremy bided his time. He waited—confident in his plans—until the day of competition to make his pot of mischief. In the early morning, he visited King’s Yard and bought two pounds of ground turkey from Morning Sun Organic Farm. Dale Filburn’s turkey would provide the foundation for our chili con carne: lean in fat, chunky in texture, and uncommonly flavorful. At Tom’s market, Jeremy picked cans of Bush’s kidney beans, Contadina diced tomatoes, and tomato sauce. 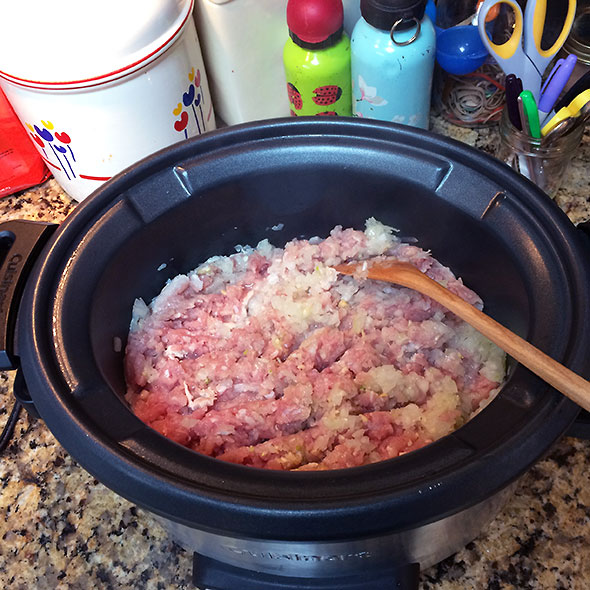 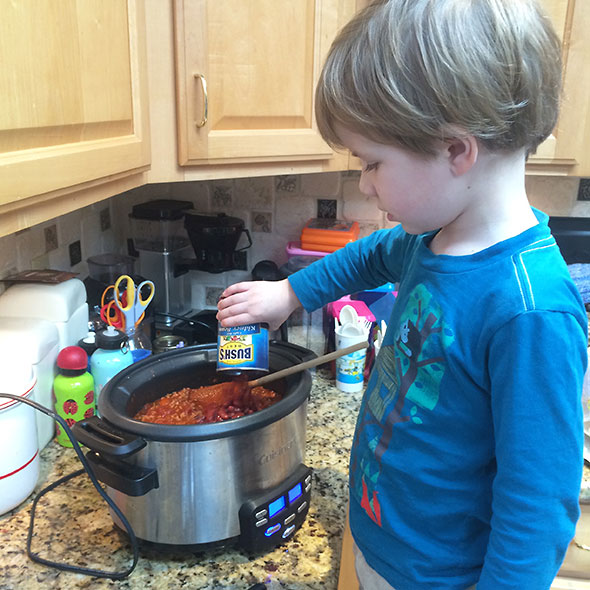 Jeremy’s strategy was largely the same as it was the previous year. He likes chili spicy hot himself but, for the competition, he set his sights on pleasing the young crowd. He’s learned from cooking for our children the art of mincing onion and garlic then browning them so they meld undetectable with the meat. He opened the Betty Crocker Cookbook to its recipe for chili and followed its proportion of meat to spice. To season the two pounds of lean meat, he portioned out 2 tablespoons of chili powder, 1 1/2 teaspoons ground cumin, 1/2 teaspoon pepper and 1/2 teaspoon salt.

Jeremy and our four year old started browning the aromatics at 1pm, then cooking the meat at 1:15pm. Two hours later, our son added the final ingredients. At 4pm, Jeremy picked up his trusty crockpot and moved its simmering chili to the competition site: the Yellow Springs High School cafeteria. 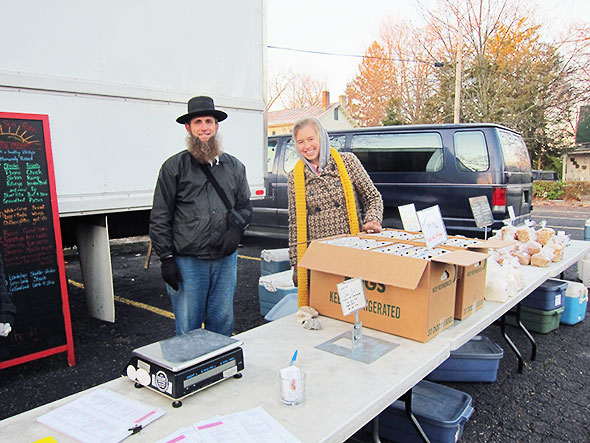 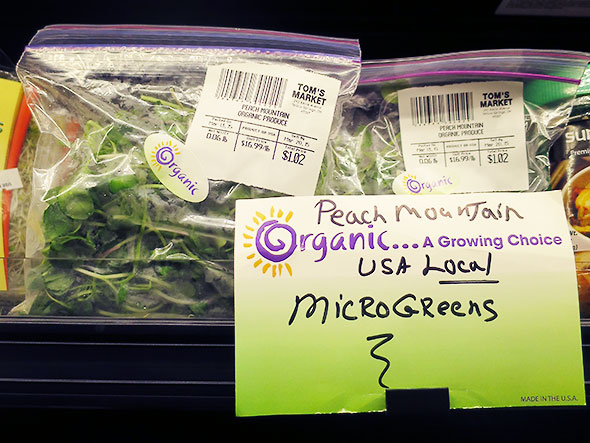 At the high school, Jeremy set the crockpot in place along with a box of whole wheat crackers and then set about wrangling the children. I took to our station: #1, in the pole position this year, up from #12 last year. I put on my apron and began unloading our provisions. As the other competitors passed me, I was surprised at how many people remembered our entry from last year. One stopped by my post and—palm face—confessed, “Toppings! I knew I forgot something.” Another winked and said, “It’s all about the garnish.” Last year, I had brought four ingredients to top our chili: green onion, pita chips, plum, and kosher salt. The plum was the surprise hit—a curious variety with pineapple notes that Tom’s Market featured last March—and a few people recalled how the blushing fruit had intrigued them. 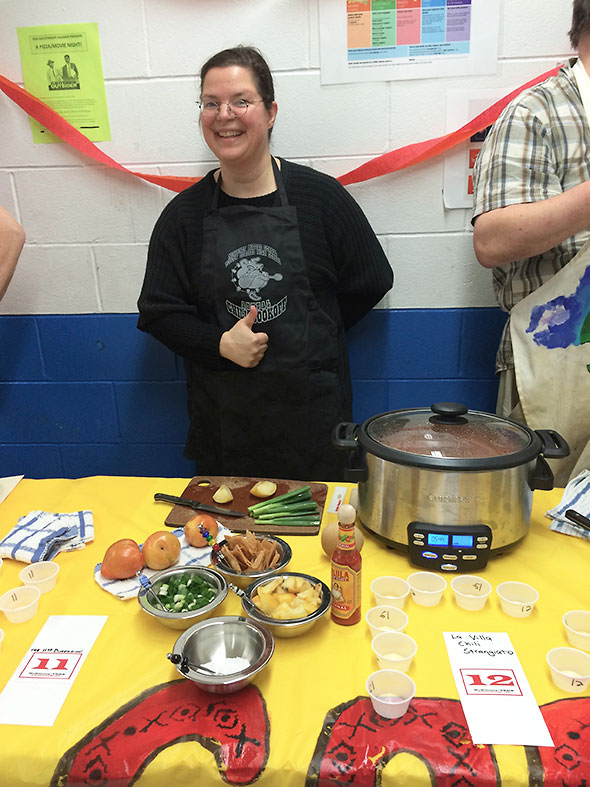 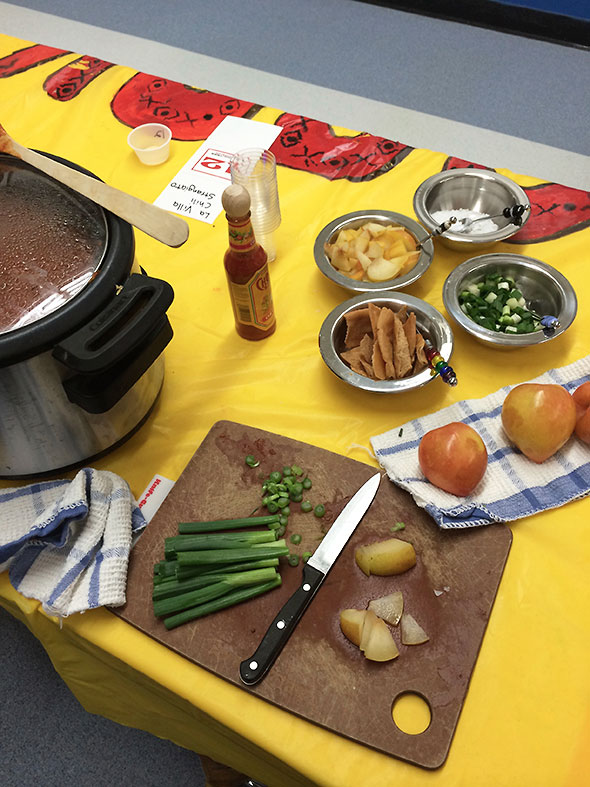 This year, we brought whole wheat crackers, two ripe avocados, and a bag of pea sprouts. The cracker and avocado are standard fare for chili; the pea sprouts—fresh picked from Peach Mountain Organics—were this year’s unexpected embellishment. A poof of spicy greens on top of each sample gave our chili a playful kick in the pants.

While I doled out and dolled up chili samples, Jeremy looked after our children and made sure they got enough to eat. We passed each other several times as I traded chili samples with the other competitors, and we compared notes on our favorites. The entries this year were excellent and diverse; collectively, we offered up a range of meats, spices, and toppings, many sourced from local herb gardens and farms. I especially loved Wyatt’s bacon-filled entry though I teased him that he made a tactical error by not wearing his scout uniform as he had to last year’s competition.

All at once in these encounters, my husband remembered to tell me given to our turkey chili, confessing that he had credited it to our daughter. Sensing my peaked curiosity as to her contribution, he explained that she had studiously done her mathematics homework as the men cooked and he wanted to honor her sacrifice.

Once the chili ran out, I relieved Jeremy and promised our children a go at the basketball hoops in the high school gymnasium. My husband gave hugs and left to collect his buddies for movie night. As parting shot to Chris Wyatt, Jeremy nodged me and said, “Be sure to stick around to collect my prize.” I laughed, feeling confident in his overconfidence. In my book, a good chili has a deeply layered, balanced flavor and catches the breath with its rising heat. I admired my husband for putting together a hearty chili that the kids could eat without fear of burning their tongue, but I could hardly expect favorite status among the crowd. The organizers called everyone back to the cafeteria to read off the results. I lounged back into my chair satisfied with my company and prepared to keep my seat. 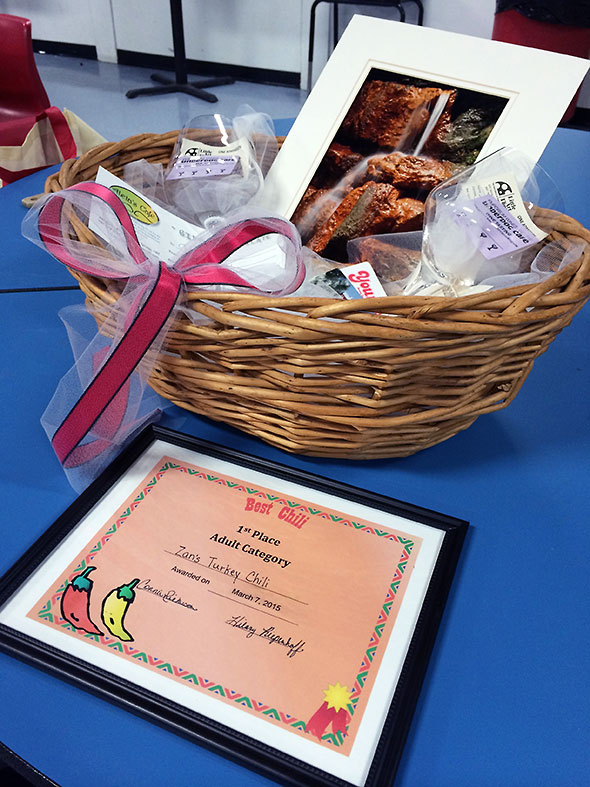 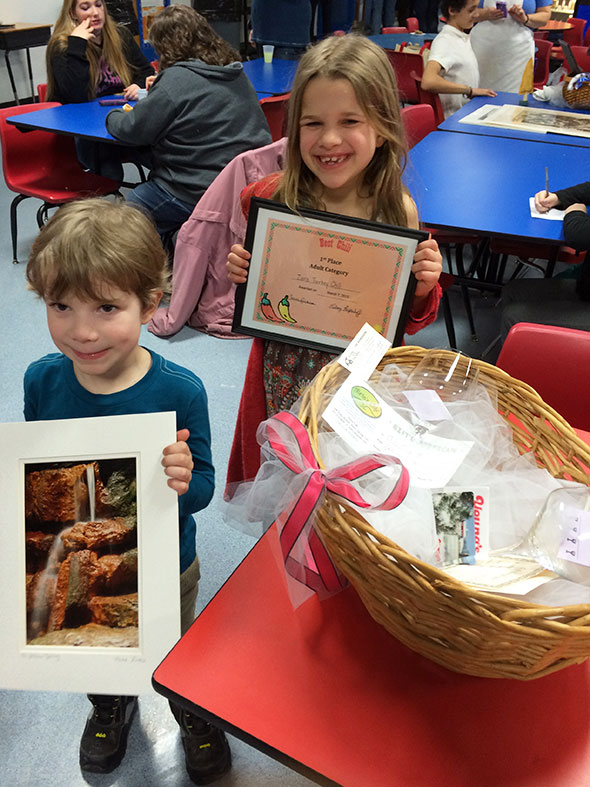 Our announcer revealed the best chili, adult category first, and I looked back at Chris Wyatt wondering who, if anyone, gave him a run for his money. Someone must have for we were told that first place was decided by a single vote. In the next second, my eyes nearly popped out of my head when I heard my own daughter’s name: Z’s Turkey Chili had taken first prize. Chris looked as shocked as I felt, but the kids raced forward to collect their father’s award just as the rascal predicted. Collecting myself enough to gather up the prize basket, I texted Jeremy a picture of its contents: the making of an excellent, now much anticipated Friday night date. The prize basket contained two quality wine glasses, each filled with movie tickets and a wine tasting punch card plus gift certificates for Glen Garden Gift flowers and dinner at Aleta’s Cafe and a final gift card for the kids to spend at Young’s Jersey Dairy.

“Shut the front door!” Jeremy texted back. Too late, honey, our secret’s out. And, next year, as Chris says, “Oh, it is ON!”