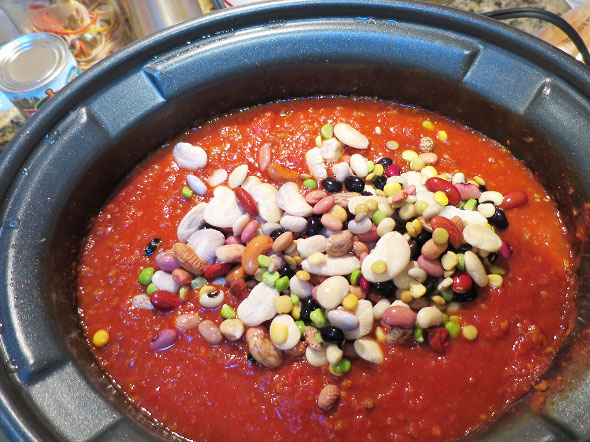 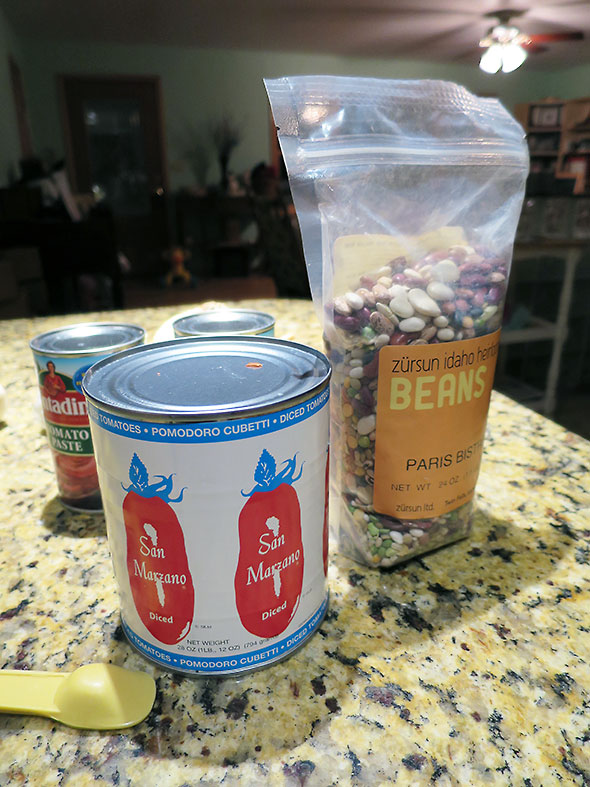 About a week ago, home brewer and cook Chris Wyatt issued an invitation among a group interested in local, sustainable food issues: “Let’s flood the McKinney Chili Cook Off with vegan, vegetarian, and traditional chilis made with locally raised meats and vegetables. We could meet each other and talk face to face!”

Keen to join the 20th Annual McKinney Chili Cook Off at the Yellow Springs High School, 420 E Enon Rd, I immediately bought into the plan. Now I just had to recruit my husband. Jeremy loves the cook off; it’s one of his favorite annual events. However, the question’s could he be turned cook rather than mere spectator/sampler.

Since we got our crock pot last fall, Jeremy has been making a heavenly spaghetti sauce using ground lamb from a sheep raised by Laura and Seth Skidmore. To bring the meat sauce into the realm of chili, we searched our pantry for beans and pulled a lovely bag of mixed beans bought at the Winds Wine Cellar. For the tomato base, we opted to use canned tomatoes provisioned by Current Cuisine. The San Marzano tomatoes come in several forms—whole, crushed, diced, and pureed—and I started bringing home the distinctive white and blue labeled cans after a Current shopper raved about them stocking up herself with no less than eight cans that night. Jeremy opened a can one night inspired to make spaghetti sauce and wowed his wife and children with his improvised concoction. 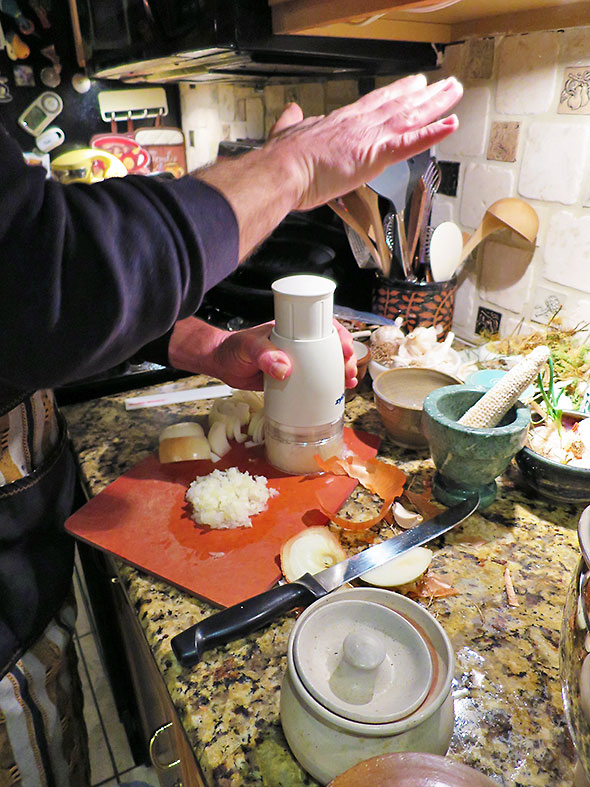 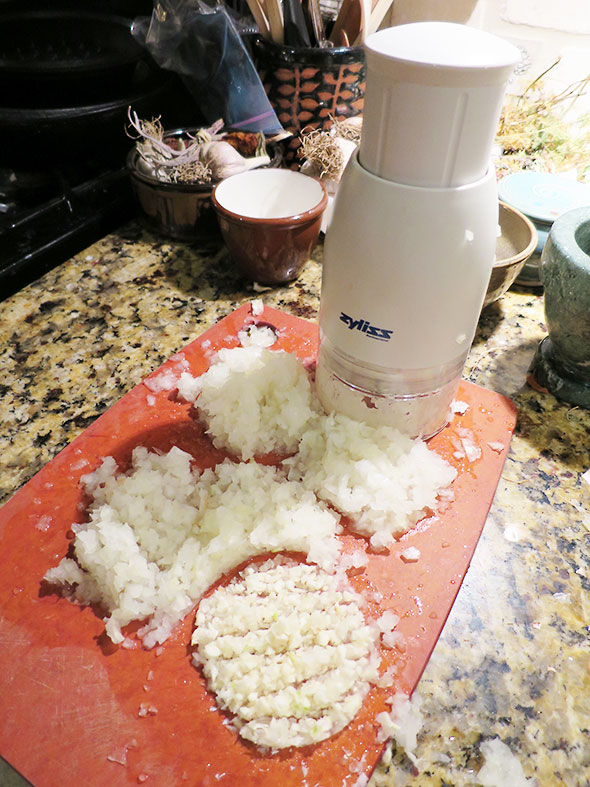 Last night, we began the improvisation again but this time to stir together a chili. Now, if cooking chili were an Olympic sport, we’d already be well behind the leaders. Chris Wyatt announced on Thursday morning that he was two hours into cooking a spicy batch. 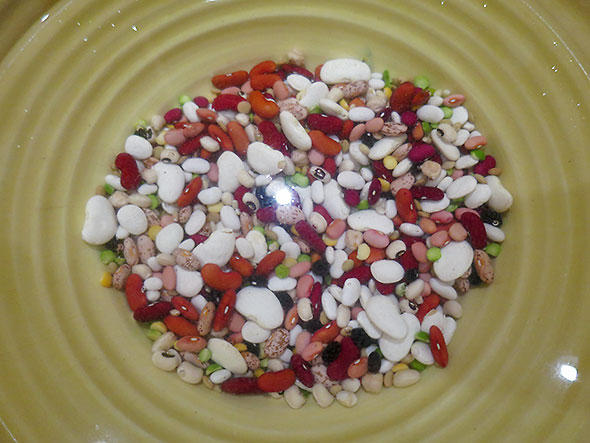 Later on Friday, he came back to announce that he had made a second batch…this time a milder chili with lots of delicious chorizo sausage. Early Saturday morning, he was tinkering again opting to combine the best parts of both chills. Back at our house, we began our chili making a full 36 hours later…still time enough but much less time for the chili to mature in taste. After a last minute run to Tom’s Market for onion and tomato paste, my husband set to work with a decisive flare. Giving his trusty Zyliss hand chopper a vigorous pound, he minced a whole onion and four garlic cloves in flash. 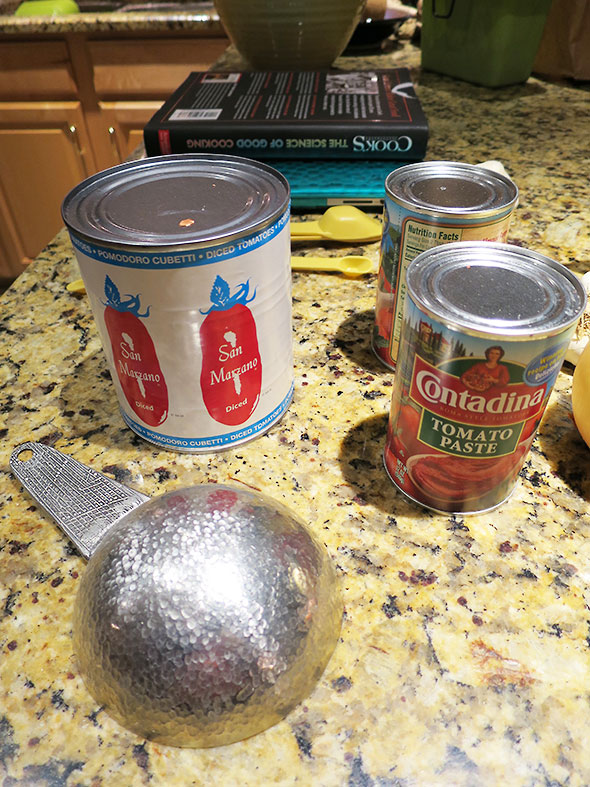 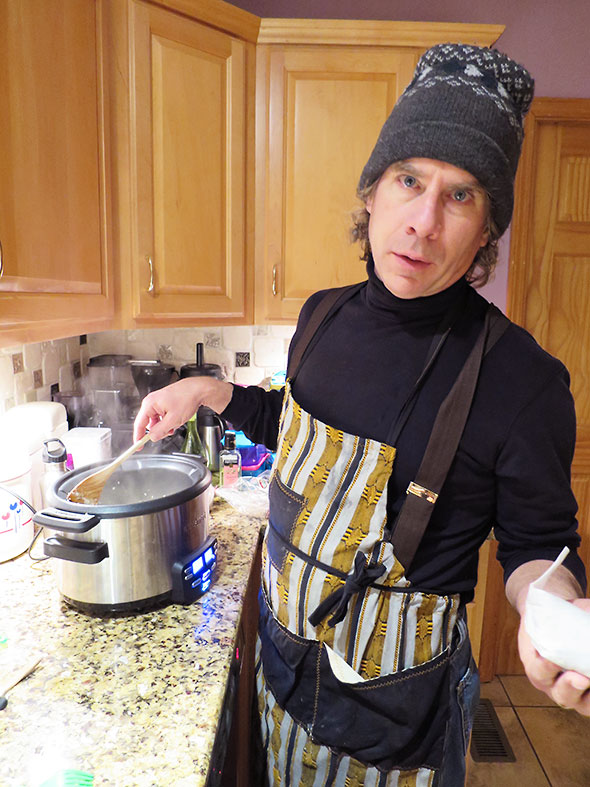 I was more reticent in my task of deciding what to do with the beans. Should we soak them overnight and then add them in the morning? Or add them dry to the chili at the start and hope the 18 hours that we had left before curtain would give them enough time to cook and take on flavor. Puzzling these questions, I researched online and found a consensus between the website thekitchn.com and two trustworthy sources: On Food and Cooking by food scientist Harold McGee and The Science of Good Cooking by the editors of Cook’s Illustrated. Following their lead, I prepared a brine of 8 cups of water and 1 1/2 tablespoons of kosher salt, a much lighter salt than standard table salt. At Jeremy’s suggestion, I added two cups of beans to the brining bowl and set it aside to sit overnight. My sources promised that the salted soak would shorten the cooking time for the beans and, also, that the salt would penetrate the beans deeply to enhance their flavor. 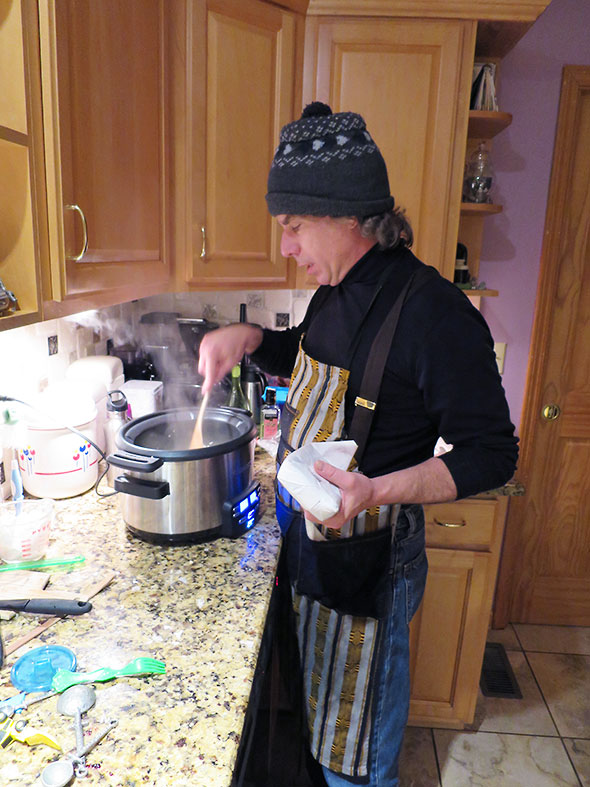 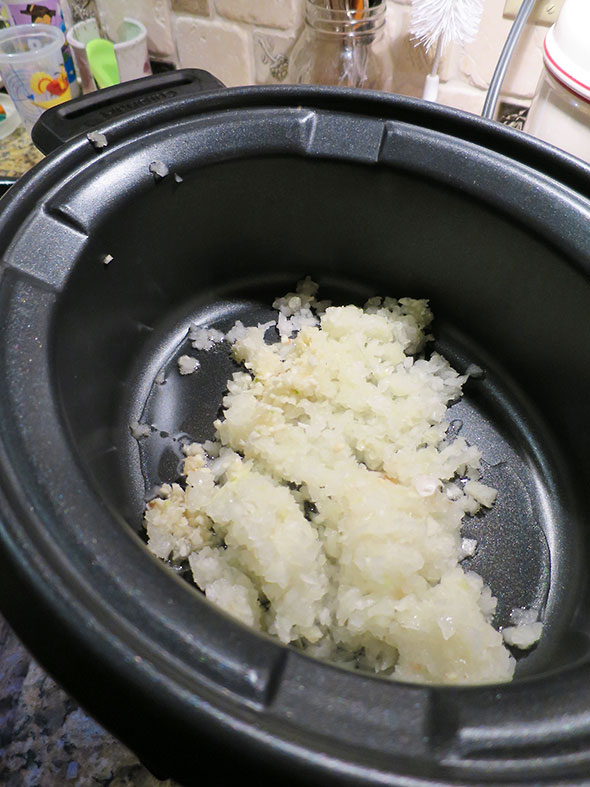 At this point in the preparation, my husband admitted to me that he doesn’t know much about making spaghetti sauce and almost nothing about chili. Previously a by-the-cookbook, shake-and-bake-box guy in the kitchen, he has felt a surge of confidence this past year and begun to improvise. Credit for this sea change goes in fair portion to my influence, the fickle tastebuds of our children, and our most excellent kitchen (God bless you, Danny and Denise!) but Jeremy also credits another influence not unlike my own. He cites as his turning point a radio vignette by NPR Susan Stamberg. “This recipe”, he says quoting her, “starts as many Jewish recipes do by browning an onion.” 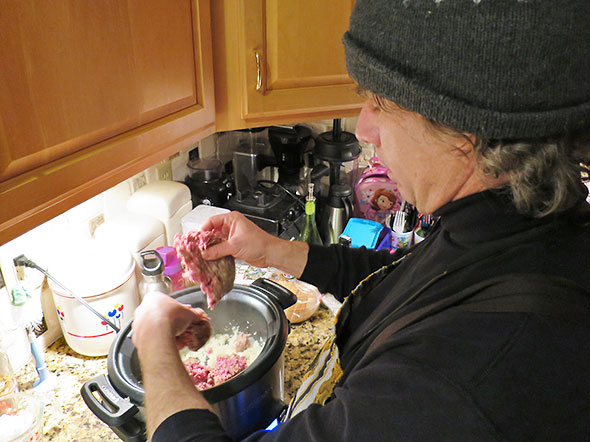 Upon delivering this testimony to his muse, my husband prepares the crock pot for the task. He turns the crock pot to its browning setting, pulls a bottle of almond oil from the pantry, and adds a generous splash to the warming base of the pot. Sliding in the minced onion and garlic into the oil, he salts and peppers the mash and lets it sit as the onion lets off steam like a train engine perfuming the air in billowing puffs. Nothing is burning; the onion mash is only releasing its great reserve of moisture. Its color turns from a silvery white to a buttery yellow, and Jeremy lets me stir until my eyes begin to tear up from the spicy onion. 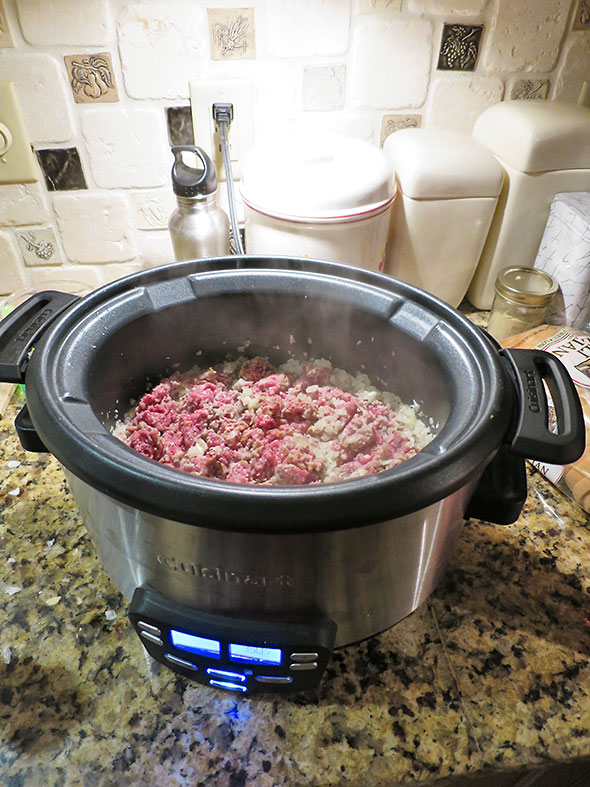 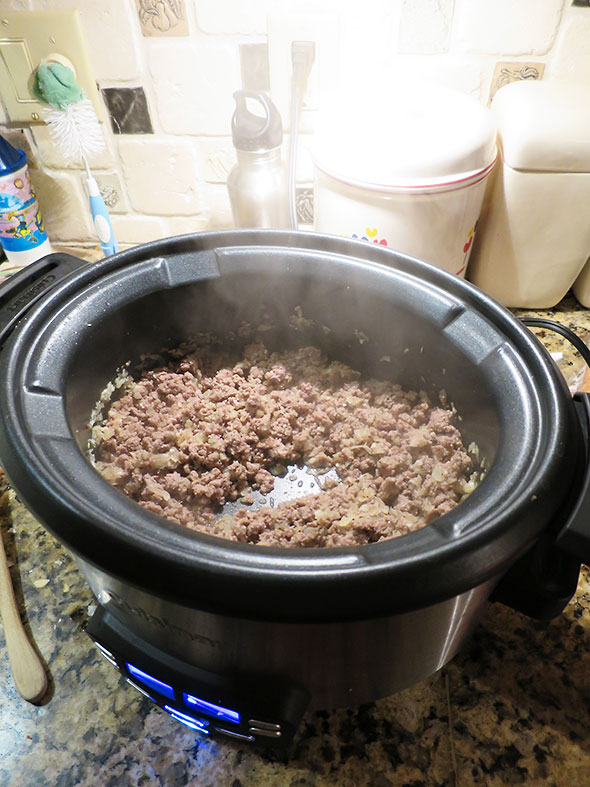 He takes over taking greater care not to lean as far over the pot as I. Soon satisfied with the onion’s progress, he drops in the ground lamb and cuts the meat and the minced onion together with a wooden spatula. 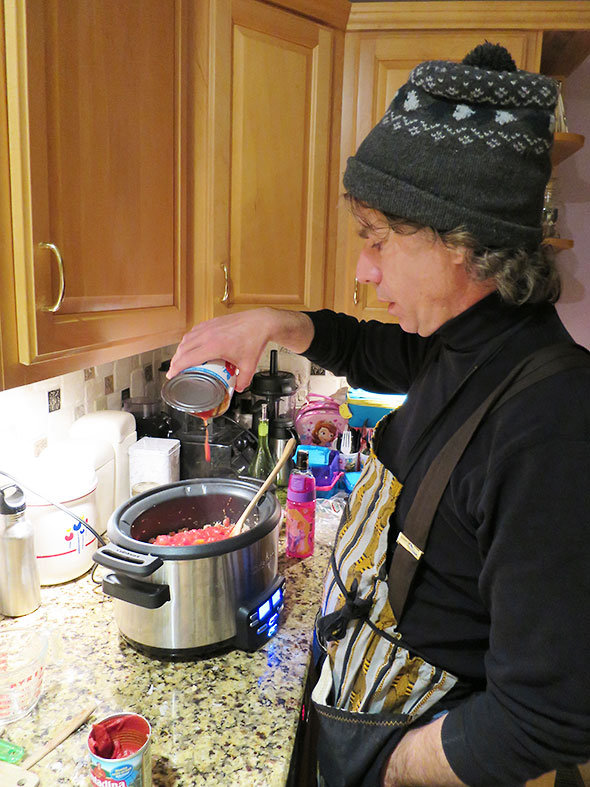 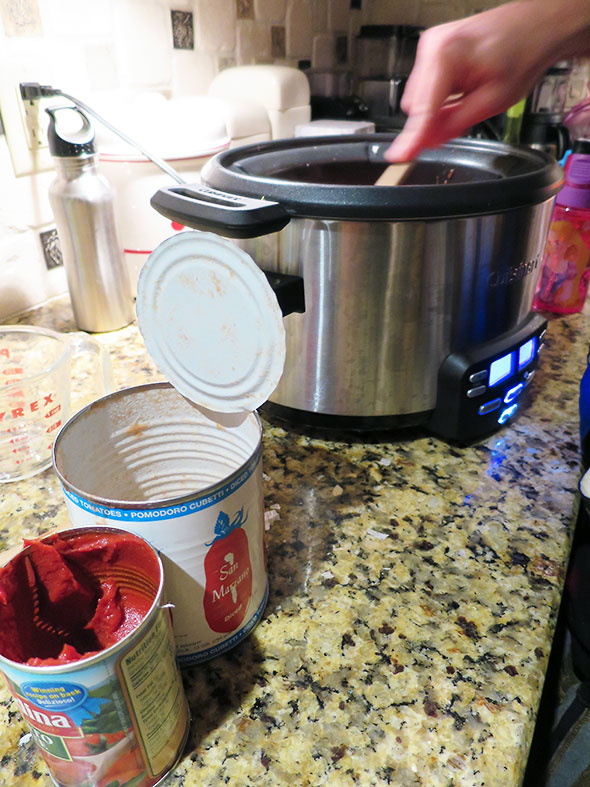 Once the ground meat changes from a marbly red to a more uniform slate brown, he adds 8 oz of tomato paste, 28 oz of diced tomato, and 28 oz of pureed tomato. Giving the luxuriously red mixture a thorough stir in the simmering pot, he changes the crock pot’s setting from brown to slow cook. 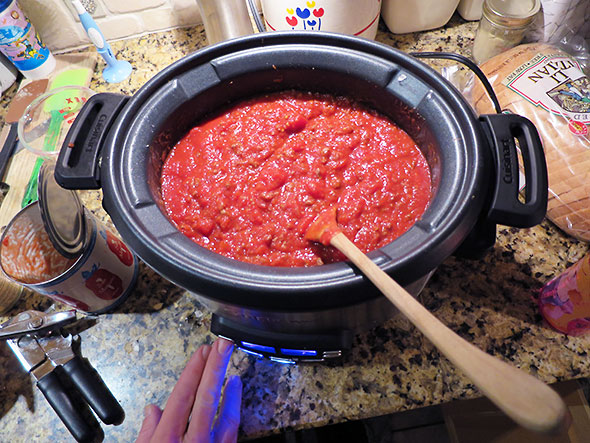 We can now head to our bed. The scent of spicy onions follows us to our chamber, and we sink into a deep but dream-filled sleep. 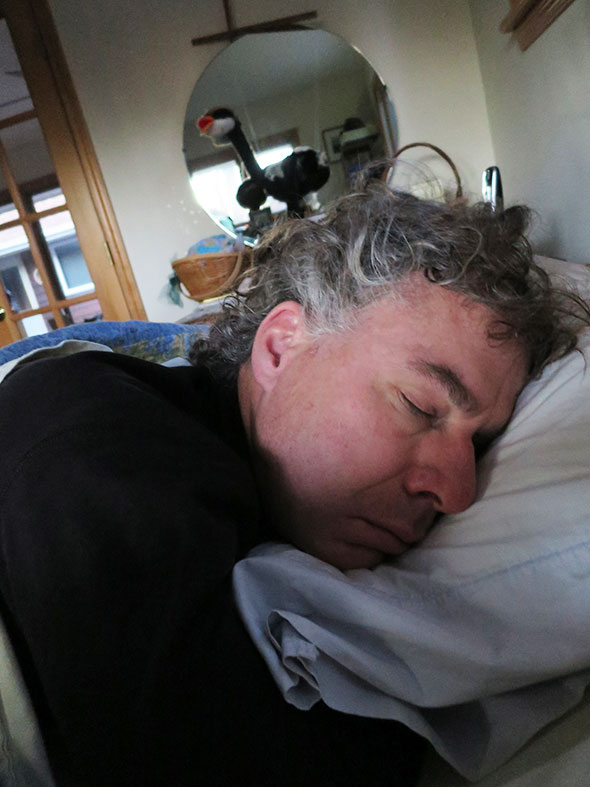 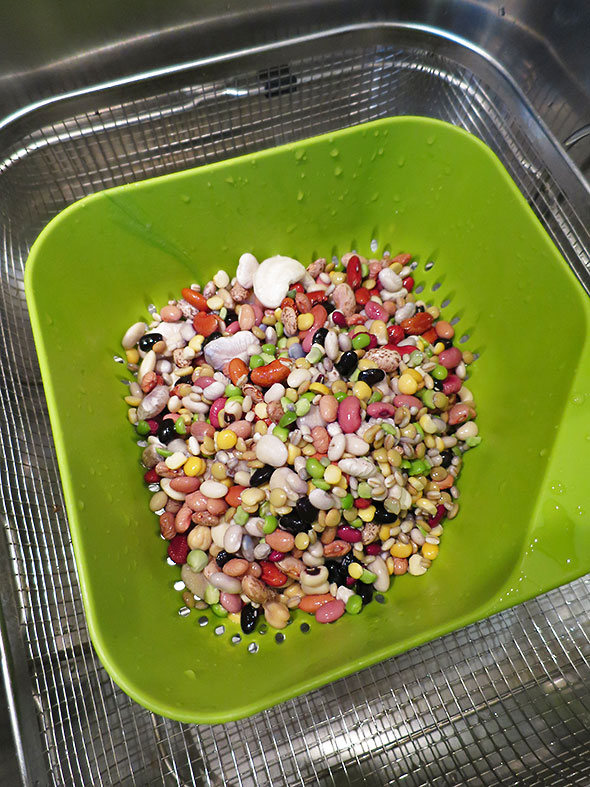 Saturday morning, we let the sun awake us. At about 8am, he strains the beans, and I add them to the pot. From here, we have a few decisions to negotiate—what spices to add and how much, what toppings to offer—but a strong foundation has been laid. The aggressive scent of onion is now tamed by fruity tomato and the grassy palatial tang of the lamb. The eclectic congregation of beans will infuse the chili with more interest offering an intriguing tapestry of color, texture, and taste. 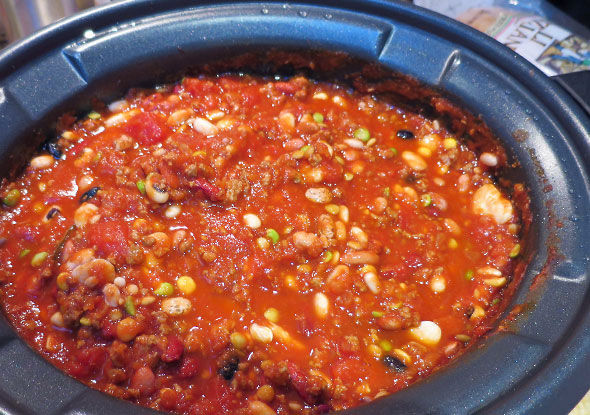 I suspect this chili will mingle well with its brethren when we meet at the cook off later this afternoon. We escort our chili to the cook off at 4pm in preparation of judging at 4:30pm and the public tasting at 5pm. Show up at 5pm sharp as the event is popular and good chili goes fast!