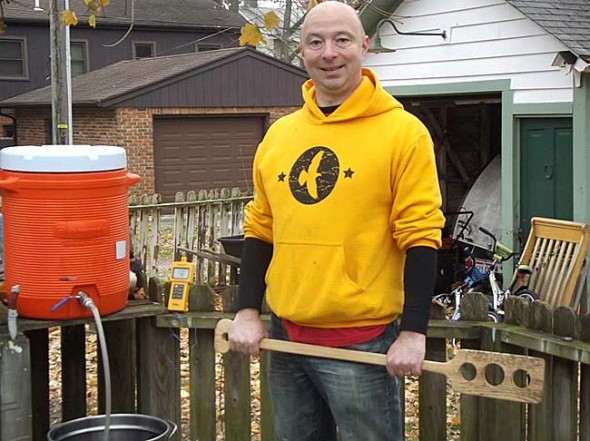 Award-winning local homebrewer Chris Wyatt prepared to mash his barley grain during the five-hour brewing of a strong British ale called Old Bastard recently. Wyatt is one of many local homebrewers who enjoy the hobby because it’s fun to experiment with different recipes and share the frothy benefits with friends. (submitted photo)

A world of homebrew, wort and all

Steam billowed from a six-gallon pot of boiling hot liquid on Chris Wyatt’s Elm Street back porch on a chilly Saturday morning recently. He hunched over a brew kettle of malted barley, water and hops, stirring every so often to admire the color and aroma of his budding brew. In three months, after aging, Wyatt would have a strong, dark British ale, but on that day he could only imagine the flavors that his timing, techniques and ingredients would impart.

“It takes some time to get to know itself,” Wyatt said, speaking of his beer almost as if it were a living being. And in a way it would be, once some 100 billion living yeast cells were added to the concoction and the fermentation party got started.

It takes just four ingredients — barley, hops, water and yeast— to make the world’s oldest alcoholic beverage, but as local homebrewers will tell you, there’s a lot more to it.

“I don’t want to say it’s magical, but it really is, how the microbes do the work for you,” said local homebrewer Brian Johnson, who ran the brewing supply section of Main Squeeze for six years.

Local longtime homebrewer Bob Klahn compares the process to roasting coffee — with one bean you can create endless varieties, and at many beer competitions there are more than 60 styles and sub-styles of basic beers. Like a gourmet chef, a craft brewer can turn a few simple ingredients into a beverage greater than the sum of its parts, which is why the hours spent brewing and weeks to months waiting are well worth it, Klahn and other homebrewers said.

“It’s really a love,” said local homebrewer and massage therapist Keri Speck. “You put a lot of time and effort into something and at the end you get this surprise.”

Homebrewing is increasingly popular across the country — just this year it became legal in all 50 states to brew your own beer at home. Homebrewing may even be more popular in a village rich with creative types and craftspeople where the homegrown and the homemade are highly prized.

Right now, fermenting away in garages, basements and kitchens across the village are glass containers of lovingly handcrafted beer, waiting to be shared. For many, the attraction to homebrewing is in the final product, for others, it’s the communal nature of homebrewing.

“There is a great camaraderie in the homebrewing world,” Johnson said. “What’s always attracted me to the hobby is that most people who are into homebrewing are very social and they share their ideas and techniques, while chefs don’t give out their recipes.”

Added Speck: “It’s awesome to be the ‘hostess with the mostest.’ It feels good to share the bounty, share the wealth.”

Wyatt too was not alone during his five-hour brewing ritual. A villager he has been teaching how to homebrew popped by to watch the process in preparation for brewing her first batch of a gluten-free beer. And simultaneously, halfway around the globe, three friends in England and Ireland were brewing the same recipe. It was the annual brewing of a beer called Old Bastard, a tradition between friends that dates back to the 1980s.

For Wyatt, who learned to homebrew just five years ago from Johnson and now regularly wins awards for his beers, homebrewing is about constantly learning and improving. He competes — this month he won two bronze medals at a competition in Zanesville, for his Brown Porter and his English-style Barleywine. And it’s also a family affair, as his sons Bob, 9 and Morris, 6, regularly help out by grinding grain and washing equipment.

Wyatt, a Wright State professor of neuroscience, loves experimenting with new recipes and techniques — on that day he was using smoked malt, two types of hops, German and American, and was soaking oak cubes from a bourbon barrel in Madeira wine, which he later planned to add to the beer. Why? To give it fruitiness, Wyatt said, but also “because Maderia’s delicious.” As for Wyatt’s love affair with homebrewing, his wife, Karen Russell chimed in:

“If you love food, you’re gonna be a good cook, and if you love drinking…” she said, laughing.
It’s a love of beer — and not just drinking it, but brewing it too — that brings people together from across the ocean or from across town. Locally, the nexus of homebrewing was once the juice bar/brewing supply outlet Main Squeeze, which had monthly homebrew gatherings, but now is Yellow Springs Brewery, which itself was started by a couple of homebrewers, and is the best place to catch up with homebrew aficionados.

Sipping a pint of Captain Stardust Belgian Saison on a recent afternoon at Yellow Springs Brewery was homebrewer Klahn, who is also a certified beer judge. Klahn, a local home energy inspector, is now in training to be a Cicerone, which is equivalent to the wine world’s Sommelier, after which he’ll be expert at pairing beer with food. In many ways beer is superior to wine, according to Klahn.

High-quality beer can cost a fraction of what a good bottle of wine costs; high alcohol beers can be aged just like wine, and the flavors are much more varied with beer, he said.

“Within beer you have a much broader palate than wine — not to be chauvinistic,” Klahn said.

Klahn explained the basics of the all-grain brewing process: “You start with grain that has already been soaked and allowed to sprout. As the sprout grows it releases enzymes that turns the starches in the grains into sugars. Then you mash the sprout and kill it by boiling [the liquid], add hops, and you’re on your way to making beer.” Later, yeast is added for fermentation that turns the sugars into alcohol and carbon dioxide.

It was technically illegal to brew beer (or cider, though home wine-making was allowed) from the end of Prohibition in 1933 until 1978, when President Jimmy Carter signed legislation that made it legal once again. But it has taken more than three decades to be allowed by all states, and some states still do not permit homebrewers to take their beer outside their home. Ohio is relatively supportive of homebrewing. Today an adult can brew 100 gallons per year at home, which is about 1,000 bottles of beer. Households with two or more adults can brew up to 200 gallons each year.

The craft brew revolution now underway can definitely be linked to homebrewing, since homebrewers often move on to open breweries, according to Nate Cornett, co-owner of Yellow Springs Brewery. Famously, Jim Koch of Samuel Adams brewed the first batch of Boston Lager in his house.

While two years ago there were no breweries in the Dayton area, now there are six, with at least three more on the way, including Vitruvian Brewing Company, located next to Yellow Springs Brewery at MillWorks in Yellow Springs. Virtuvian is the vision of local couple Shane and Jacqui Creepingbear, who started homebrewing while Antioch College students. Vitruvian continues to make progress toward opening, Shane Creepingbear said this week. Currently they are renovating their space and waiting for their federal application to be approved.

Cornett started homebrewing about five years ago, was soon brewing every weekend, and early on in his homebrewing hobby purchased the website http://www.yellowspringsbrewery.com. Yellow Springs Brewery’s lead brewer, Jeffrey McElfresh, also started out as an award-winning homebrewer. Wyatt jokes that McElfresh would regularly beat him in competitions. Cornett said it has been a fun challenge to scale up from 5-gallon batches to 217-gallon batches, but otherwise the differences between homebrewing and craft brewing are few. While at the brewery, “if you make a mistake, it’s a lot more expensive,” both homebrewing and craft brewing are “all about recipes and technique” with a primary focus on water quality, Cornett said.

Creating exciting, new recipes is another draw for local homebrewers, since practically anything can be added to a brew, they said. Johnson makes a chili pepper stout and also likes to add cardamom, ginger and honey to different beers. Speck, for instance, adds cinnamon and nutmeg to beers brewed especially for the holiday season. The possibilities are endless. Homebrewers also cited health benefits of beer —it is high in Vitamin B, protein and antioxidants — along with many other intangible values of the homebrew hobby.

“It gives room for creativity — with every recipe we put a lot of thought into it,” Speck said of homebrewing. And the aroma can sometimes be just as intoxicating as the beverage itself. “It’s like cooking a pot of stew — it fills your whole house up,” she said.