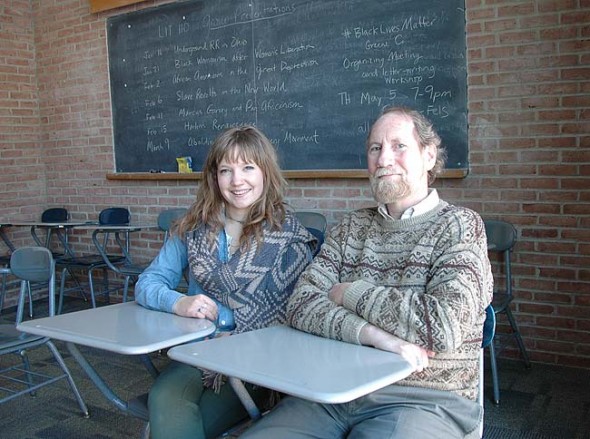 Antioch College student Taylor Spratt and the Yellow Springs Bahá’í community will host a documentary highlighting an online campaign to educate Bahá’ís worldwide. The film, “To Light a Candle,” will screen this Saturday, Feb. 28 at 7 p.m. at room 219 in the Science Building on campus. Roy Qualls, right, will moderate the post-film discussion. (Photo by Lauren Heaton)

Film argues that education is a right

For Taylor Spratt, an Antioch College student who grew up between Milwaukee and the Chicago suburbs, a college education was a given. But for her contemporaries who live in Iran and adhere to the Bahá’í Faith, attending Iranian university is prohibited by law. To Spratt, education is a basic right, and forbidding anyone from pursuing knowledge for any reason is not only harmful to society but counter to the whole idea of humanity.

Many members of the Bahá’í Faith feel the same, and have started an underground university known as the Bahá’í Institute for Higher Education using teachers around the world to educate Bahá’í students in Iran in online and clandestine classrooms around the country. The school is the subject of a film, “To Light a Candle,” which Spratt and the Yellow Springs Bahá’ís plan to screen on Saturday, Feb. 28 at 7 p.m in Antioch College Science Building cinema room 219. The film will be followed by a discussion featuring BIHE graduate and teacher Amin Ghorbanpour, who is travelling from East Lansing, Mich. for the event.

The documentary was directed by Iranian-Canadian journalist Maziar Bahari, who was himself the subject of last year’s film “Rosewater,” directed by Jon Stewart of Comedy Central’s “The Daily Show.” “Rosewater” is based on Bahari’s memoir “When They Came for Me,” a recounting of his imprisonment in Iran while covering the 2009 presidential election, a topic that had been satirized during an interview with Stewart earlier that year on the “Daily Show” and was one of the reasons for his arrest.

Bahari is not a Bahá’í. But his film highlights a subversive tactic that an oppressed people have used to serve a basic human need that people have been denied all over the world for reasons of religious, economic, racial and gender discrimination.

Spratt, who takes Antioch’s Global Seminar in Education, has thought deeply about the different motives for learning, including to cultivate a career and a livelihood. But, especially as a student of a long liberal arts tradition, she settles more squarely on learning as a very natural, human tendency.

“The purpose of BIHE is for the love of learning, because there’s so much power in education,” she said of the vitalizing force that teachers who don’t get paid and students who don’t earn degrees get out of the school. “Education is humanizing. That resonates with me, and it’s one reason I wanted to help screen this film.”

“To Light a Candle” will screen in Yellow Springs the day after the launch of a world wide Education is Not a Crime campaign to raise awareness of Iran’s discriminatory policy. “To Light a Candle” is also scheduled to screen at over 200 universities and public spaces around the world. It will also play at the Neon Theater in Dayton on Sunday, March. 1.

The Bahá’í Faith was founded in 1863 by the prophet Bahá’u’lláh, who was raised under the state religion of Islam. As such, the Iranian government has long seen Bahá’ís as heretics and has persecuted them for over a century. According to the film, in the decade following the 1979 Islamic revolution, over 200 Bahá’ís were executed and at least 1,000 were imprisoned because of their faith. In the 1990s, partly to shed negative attention within the global political landscape, the Iranian government began focusing on a more surreptitious campaign to deny Bahá’í’s social and economic mobility. According to a Bahá’í World News Service report, large numbers of Bahá’í youth and children were expelled from primary and secondary school. Though in response to international pressure, some were allowed to re-enroll, the government maintained an official ban on university education for Bahá’ís until 2004, and the unofficial denial of higher education to Bahá’ís in Iran continues today.

But the Bahá’ís, who have grown to 7 million worldwide, are resisting. When BIHE began in 1987, teachers and students had only hard copy to work with and mostly face-to-face instruction. With the advent of the internet, teachers (Bahá’í and non Bahá’í) from over 100 universities around the world are participating. The school is an example of how one group is meeting systemic persecution with non-violent resistance.

According to Roi Qualls, who will moderate the post-film discussion, the BIHE is a heroic response to a senseless system of governance.

“You can’t live up to your potential if — for whatever reason — you’re not given the tools to develop your skills and your mind,” he said. “That’s where it becomes a human rights issue.”