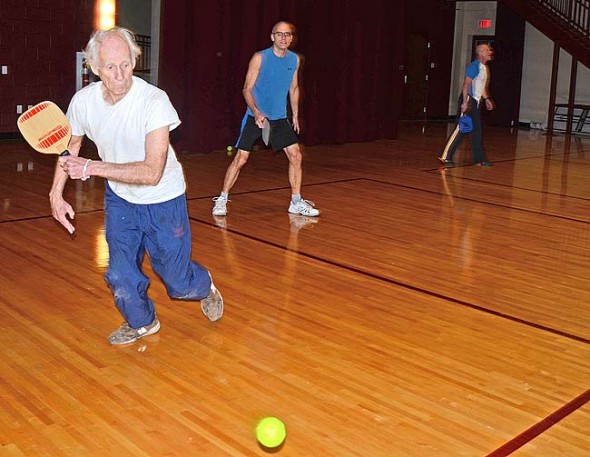 Al Schlueter, left, and Franklin Halley, center, are among the villagers who have caught the bug for pickleball at the Antioch College Wellness Center. A pickup pickleball game takes place every Sunday at 1 p.m. in the South Gym. (Photo by Megan Bachman)

It’s like ping-pong if you were on top of the table.

That’s how Al Schlueter described the fast-growing racquet sport with a silly name that is a whacking success at the Antioch College Wellness Center.

It’s called pickleball, and enthusiasts describe it as a cross between tennis, racquetball and ping-pong. Played with a wiffle ball and solid paddle, the game is fast-moving and fun — and it’s a good workout, according to Franklin Halley.

“It’s quick, it takes hand-eye coordination, it’s a reasonable workout, it’s really social, and it gets you smiling,” Halley said of the sport’s benefits.

With six courts striped for play at the new wellness center, pickleball is attracting lots of players. Enthusiasts say that anyone of any age or ability can pick up the game quickly and start to compete. And since it’s usually played as doubles, it’s very social.

The makeup of the dozen or so villagers who came out for the popular Sunday pick-up game included three newbies and a host of regulars eager to teach them. There were young adults and septuagenarians. It included pickleball player of six years and Senior Olympic competitor Deloria Jacobs, who donned her own high-tech paddle and gloves; Halley, a swimmer who started offering pickleball clinics at the center, and Tjioe Kwan, who now plays pickleball three times per week between the wellness center and the Xenia YMCA, where he first picked up the sport. A longtime tennis player, Kwan finds pickleball similar but with its own benefits.

“It’s good exercise, it’s a very social game and it’s easier than tennis because the paddle is shorter,” Kwan explained.

Pickleball is on the rise in the U.S. in part due to its attraction to seniors. The U.S.A. Pickleball Association claims it is the fastest-growing sport in the country with more than 100,000 players and 5,600 courts in the U.S., according to its website.

Wellness Center Director Monica Hasek said recently that they chose to offer pickleball because they had heard from area YMCAs how popular the sport was with seniors, while it attracts players of all ages. In the last month, pickleball has become huge at the center, which surprised her since hardly anyone had heard of the sport when she gave tours of the newly-renovated center.

“In the last month it has gone rampant,” Hasek said. “People are excited.”

While pickleball is easy to pick up, the rules can be a bit perplexing. Games are played to 11, only the serving team can score and an area just in front of the net is off-limits for volleying. A pickleball player who violates the no-volley zone, also known as the “kitchen” or “danger zone,” is a “volley llama.” Another difficult rule is the “double bounce” rule, where both a return serve and the return of the return must first bounce before a player strikes them. Balls that must bounce are called “flapjacks.” Otherwise, it is similar to tennis and ping-pong.

Pickleball can be played indoors or outdoors. In fact, Halley and a small group of other locals have played pickleball on the tennis courts for the past five years, marking out the smaller court in chalk or tape and dropping the net slightly. But the pickleball community is now growing fast.

Among the regulars is Tod Tyslan, who learned pickleball while a student at Antioch College in the mid-90s. It wasn’t too popular then, but Tyslan got his start. He went on to competitive badminton before returning to pickleball recently when the community just “sprouted up,” he said. Tennis player Reggie Stratton recently started playing pickleball for a good workout but also believes it could be helping his tennis game.

“You sweat and sometimes you go to bed sore,” Stratton said. “It’s also going to help with my net reaction in tennis.”

In a particularly competitive game last Sunday, Tyslan and Stratton were down 10–3 to Kwan and Jim Johnson. The plastic wiffle ball on the wooden paddles was delivering a satisfying whack sound, and as the volleys quickened, the waiting players on the sidelines became rapt.

“You guys are getting greedy on points,” Stratton joked when the score was called out.

“You’re not so good at math,” Tyslan added.

Tyslan and Stratton won back-to-back game points to keep themselves alive, then lost three straight, with Tyslan barely missing a volley into the net on game point. Even in defeat, Tyslan had what Halley calls the “pickleball smile,” saying of his fault:

Pickleball was started in the mid-1960s in Bainbridge Island, Wash, according to the U.S.A. Pickleball Association. The game was first improvised using a badminton court, ping-pong paddles and a wiffle ball. Eventually they lowered the net and started playing on a hard surface. The name is shrouded in legend, but according to some accounts, it was named after the inventor’s cocker spaniel, Pickles.

The Antioch Wellness Center, which opened in September 2014 after an $8 million renovation, has 1,753 members, including Antioch students, faculty and staff, according to Hasek.