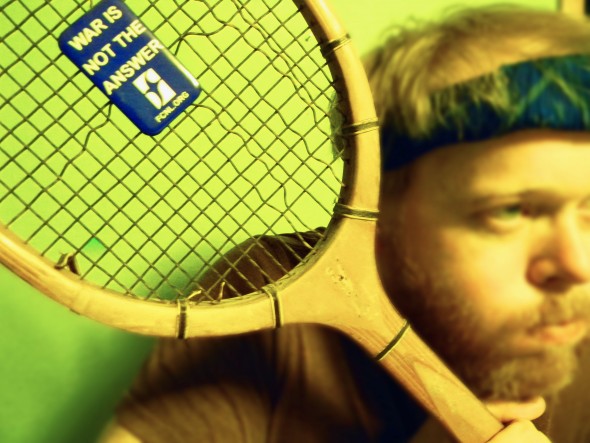 A handsome villager prepares for a game of racquetball — with a twist.

[EDITOR’S NOTE: This piece is not endorsed by the Wellness Center or Antioch College.]

The Wellness Center at Antioch College opened its doors in September of 2014, and has for nearly seven months been serving both students and community members with pathways to bodily health through a variety of available activities, classes and workshops. On April 1, the center announced that it would expand its offerings, seeking to provide members with new ways of exercising that go beyond caring for their physical forms.

“We’re excited to roll out a unique new series of activities that will help health-minded folks build up the two most important muscles: the brain and the heart,” said Wellness Center spokesperson Phyllishabeth Bershaw this week. “And in this case, of course, I’m talking about the figurative heart, not the one that is an actual muscle, because we already have classes for that. Also the brain isn’t a muscle, but stay with me here.”

One new offering is Racquetballing to Equality, a class that Bershaw says she hopes will address both the need for social justice awareness and the average American’s love for competitive sport. “What we do is, we make the balls symbolic for the injustices still rampant throughout this nation. Look at this one,” she says, as she holds up a ball that has been inscribed with permanent marker. “This one says ‘Minimum Wage Should Be a Living Wage.’ Or this one, ‘Marriage is for Everyone.’ Or even this one, ‘Legalize It.’ As you and your opponent square off, the game will transcend its boundaries; it will become something more. It’ll inspire conversation between the two of you. And when you knock one of these suckers against the wall, you just won’t believe how cathartic it will feel. Almost like activism, that’s how it feels.”

Another new activity, says Bershaw, is reserved especially for women. “We call it ‘Wage Gap Rock Climbing.’ Essentially, it’s identical to any other rock climbing wall, except that at the top we’ve installed a glass ceiling. Every woman who makes it to the top is invited to bust right through it.”

Bershaw says her favorite new class is Out-of-the-Boxing, a new take on the age-old sport. “Boxing is barbaric, to be frank,” she said. “Two people stand in a square and shake hands and then proceed to beat the living daylights out of one another. But what if, instead of clenched fists raised in violence, we offered outstretched hands, in a spirit of camaraderie? What if, instead of ducking and dodging, trying to obfuscate or evade, we were to face one another with our intentions clearly written on our faces, as though to say, ‘I acknowledge you, friend’?”  When asked to describe how an Out-of-the-Boxing match operates, Bershaw said, “It’s basically just aggressive hugging. Does wonders for your core.”

A full suite of new classes and activities are set to hit the Wellness Center this summer. Listed below are the upcoming additions: