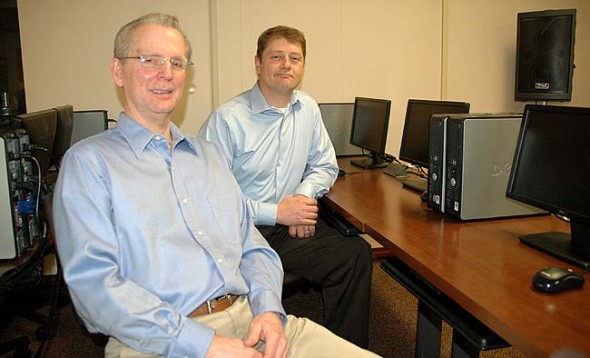 Tim Barhorst, left, chair of the Springs-Net nonprofit and Thor Sage of the Miami Valley Educational Computer Association, or MVECA, are among the organizers of the Fiber Forum, to take place Saturday, April 25, beginning at 9 a.m. at MVECA on East Enon Road. (Photo by Carol Simmons)

• Click here to read the itinerary of the MVECA Fiber Forum on April 25.

Turn on a light, you want it to come on. Plug in a refrigerator, you expect it to keep your food cold. We don’t even think about it — unless the power goes out. Our lives are dramatically altered when access to electricity is limited or unavailable. We can’t remember life without it.

Most adults, however, can remember a world before the Internet existed. Nevertheless, online access is reaching a parallel level of use and dependency to that of our reliance on electricity. It’s not the same — at least not yet — but the comparison is apt, says Thor Sage, of Miami Valley Educational Computer Association (MVECA), a nonprofit technology consortium based in Yellow Springs.

Like electricity and water, the Internet has become a utility, say community members who are urging Village leaders to construct a fiber optic network that would provide high-speed Internet access for the entire town. As part of that initiative, supporters will host a “Fiber Forum” on Saturday, April 25, at the MVECA Data Center, 330 E. Enon Road.

The forum will feature speakers and presentations from 9 a.m. to noon followed by a roundtable lunch from noon to 1 p.m. The purpose is to educate and inform local residents about what might be possible here and to engage the public in a communitywide conversation about a desirable course of action for Yellow Springs. Admission is free, and lunch will be provided to those who register by Monday, April 20.

“People like me,” Sage said, “have spent years learning about the technology, while others have a difficult time understanding the terms and phrases, making it difficult to have a constructive dialogue. Our primary goal (with the forum) is to help the community at large to prepare for an ongoing dialogue.”

The forum follows nearly a year of discussion and leadership by a citizens group that is spearheading the local initiative. Tim Barhorst is the chair and founder of the effort, which goes by the name Springs-Net. Barhorst, a network engineer, said the group first came together with some informal phone calls in response to posts one evening on the social media website Facebook. He said a couple of people had written wondering if other Time Warner customers were having any problems with their connections, and then someone else posted that AT&T service was slow as well. He said the conversation thread confirmed the feeling he had when he first moved to town two-and-a-half years ago that Yellow Springs is “a prime location to install a municipal network.”

The phone calls turned into meetings, and the meetings, featuring a core group of 8–10 people, turned into a proposal for Village Council action.

Council member Brian Housh said that the subject of Internet access in the village is not new. Some studies were done as far back as 10 years ago, he said, but Springs-Net and MVECA have pushed the issue forward.

“There are a lot of technical aspects to it,” Housh said. “But Council definitely saw the value in exploring this further.”

Council started by asking the Village’s Community Access Panel (CAP) to work with Springs-Net in developing a plan. Since CAP has oversight of Channel 5, the local access cable station that went online about a year and a half ago, it “seemed to be the house for that,” said Housh, who is the Council liaison for CAP.

Early in the process Council joined the nationwide Next Century Cities affiliation, which Barhorst had recommended. Membership is free, and the organization offers information and support for municipal entities that want to maintain local control of their Internet resources. A representative of the group will be one of the speakers at the April 25 forum.

More recent Village action was to highlight communitywide connectivity as one of Council’s nine strategic goals for 2015.

The next step was “we needed to have some kind of forum workshop to explore this idea further,” Housh said. Technology also will be part of the presentations, as several speakers will appear through remote services. “Local self-determination” is one of the primary issues for Barhorst.

“There are a plethora of benefits that we can’t glean from major corporations,” he said.

Organizers say that speed and reliability are enhanced with local fiber optic networks. And with that comes the ability to attract and develop new businesses; communitywide equity in terms of online access; a backbone for Wi-Fi access downtown; and new revenue streams that will stay in the village, among other benefits. More information and videos can be found on the Springs-Net website: http://www.yellow-springs.net.

The outcome of the forum will help the Village decide how to move forward, Housh said.

“Ultimately, we could put together a plan and explore the next step – how do you pay for it.”