Are local children and teens making themselves vulnerable to dangerous sexual predators by what they share on social media?

And are local parents doing enough to monitor their kids’ online behavior to keep them safe? 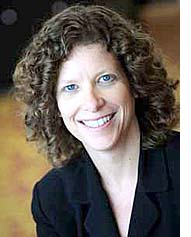 Noll will share the results of her research on how kids become vulnerable to being sexually exploited online and in offline encounters that begin online. With today’s rapidly-changing technology, many parents no longer know how to teach their kids to be safe, a situation “unlike any other phenomenon we’ve encountered in history,” Noll said in a telephone interview this week.

“As concerned parents, we say ‘don’t talk to strangers,’ but here is a situation we know little about,” Noll said. “We will never be in front of the technology, so we have to give kids tools to help them protect themselves.”

Local parents, educators, teens and “tweens” are invited to attend, according to event organizer Jennifer Berman, who wanted to bring an expert to town after Mills Lawn Elementary School teacher Ben Trumbull was arrested and charged in February on charges of pandering sexually oriented matter involving a minor. As the Community Life liason at Antioch College and parent of a student who was in Trumbull’s fourth-grade class, Berman wanted to create a “positive lesson” from a difficult situation, she said.

“One positive lesson we can draw from this is to look at how we are going to protect our children from Internet dangers,” Berman said. “Kids are posting things online that are there forever and available to people who don’t have their best interests at heart.”

Berman found Noll at Penn State University’s Network on Child Protection and Wellbeing, a center created in the wake of a child molestation scandal involving former football coach Jerry Sandusky. Noll, who runs the center, also maintains a professorship at Cincinnati Children’s Hospital. The academic researcher has been funded by the National Institutes of Health since 1995 to study the long-term impact of childhood sexual abuse, and is also currently working on a NIH-funded study specficially about the ways teens make themselves vulnerable to abuse through the Internet and social media, she said.

“I come from a scientific point of view,” Noll said of her approach to the topic. “I’m not a practitioner or a politician and I have nothing to sell,” she said, adding, “We are trying to understand the safest ways to utilize new technology.”

For example, Noll’s research has found that parental control software is not effective at reducing risks to kids. Instead, local parents need to be Internet-savvy and  monitor their kids’ online activities. Parents and educators also need to talk openly with youth about the dangers, share with them what not to post on social media and teach them how to stop untoward advances initiated online.

Noll is especially concerned about the dangers of “provocative self-presentation,” which can include teens posting racy photos of themselves or otherwise indicating they are interested in sex, drugs or partying, she said. That can attract sex traffickers or other predators who initiate online conversations, and then suggest in-person meetings. Predators are adept at finding the most vulnerable teens online through social media sites, she added.

Statistics show that the danger of abuse is real, Noll said. Her recent research revealed that 30 percent of the 250 teenage girls surveyed had met someone in person offline who they had only previously met online. And while not every encounter ends in abuse, the potential is there and social media often plays a significant role, Noll said.

“People say, most encounters are not dangerous and that’s true for things like Craigslist too, but arguably one of the most dangerous things a teenage girl can do is meet someone whose identity they haven’t confirmed,” Noll said. While most of Noll’s research has focused on teenage girls, younger children and boys are also at risk, she said.

Another important lesson to teach youth is how to ward off sexual advances online and say no to friend requests from strangers or people they barely know, Noll said. Some of the young girls Noll studies have more than 1,000 friends on Facebook and might be allowing complete strangers to have access to personal details like their phone number, home address or school.

Noll believes that parents and educators must start teaching kids about online safety and cyberbullying at younger ages, since statistics show that younger children are going online. While Facebook requires that its users be at least 13 years old, a 2013 survey found that 52 percent of eight to 16-year-olds ignored Facebook’s age limit. The survey, by the organization Knowthenet, also revealed that more than half of children use social media by the age of 10, with Facebook the most popular site that youngsters join. About 43 percent had messaged strangers, starting at an average age of 12. And according to a 2012 survey from the Pew Research Center, only 60 percent of teen Facebook users had their Facebook profiles set to private.

Meanwhile, the Knowthenet survey found that just 32 percent of parents said they felt “very confident” about helping their kids stay safe online. Noll is working to increase those numbers in order to reduce another number, the 2 million children each year who are new victims of child maltreatment, including sexual abuse, physical abuse and neglect. That comes to one in 25 children annually who suffer from abuse that can impact them for the rest of their lives. Above all, parents must stay computer literate themselves, maintain a close relationship and open communication with their kids, and learn how to reduce risks, Noll said.

Noll added that she thinks the dialogue is just what the community needs during this difficult time.

“I really appreciate this chance for the community to come and dialogue about their concerns and how they deal with the potential for internet-initiated victimizations,” Noll said. “This generation is embarking on new ways of communicating and we need to learn how to best protect our kids.”