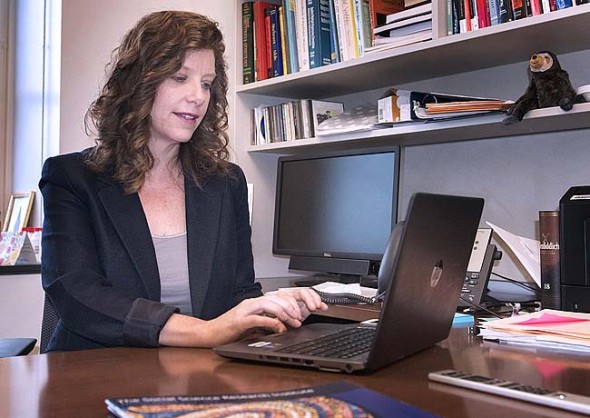 Are local children and teens making themselves vulnerable to dangerous sexual predators by what they share on social media?

And are local parents doing enough to monitor their kids’ online behavior to keep them safe?
Professor and researcher Dr. Jennie Noll will address these questions and more at a free talk 7 p.m. Wednesday, April 15, at the Antioch College Wellness Center South Gym.

Noll will share the results of her research on how kids become vulnerable to being sexually exploited online and in offline encounters that begin online. With today’s rapidly-changing technology, many parents no longer know how to teach their kids to be safe, a situation “unlike any other phenomenon we’ve encountered in history,” Noll said in a telephone interview this week.

“As concerned parents, we say ‘don’t talk to strangers,’ but here is a situation we know little about,” Noll said. “We will never be in front of the technology, so we have to give kids tools to help them protect themselves.”

Local parents, educators, teens and “tweens” are invited to attend, according to event organizer Jennifer Berman, who wanted to bring an expert to town after Mills Lawn Elementary School teacher Ben Trumbull was arrested and charged in February on charges of pandering sexually oriented matter involving a minor. As the Community Life liason at Antioch College and parent of a student who was in Trumbull’s fourth-grade class, Berman wanted to create a “positive lesson” from a difficult situation, she said.

“One positive lesson we can draw from this is to look at how we are going to protect our children from internet dangers,” Berman said. “Kids are posting things online that are there forever and available to people who don’t have their best interests at heart.”

Noll is the director at Penn State University’s Network on Child Protection and Wellbeing, a center created in the wake of a child molestation scandal involving former football coach Jerry Sandusky. Noll also maintains a professorship at Cincinnati Children’s Hospital. The academic researcher has been funded by the National Institutes of Health since 1995 to study the long-term impact of childhood sexual abuse, and is also currently working on a NIH-funded study specficially about the ways teens make themselves vulnerable to abuse through the Internet and social media, she said.