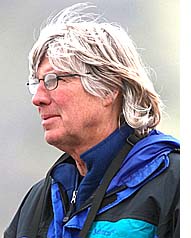 On Tuesday, April 21 at 7 p.m. writer and birder Kent Nelson of Colorado will read at the Glen Helen Building. Nelson recently won the Drue Heinz Literature Award from the University of Pittsburgh Press, one of the most prestigious awards for short story writers.

Nelson won the award for his recently published collection, “Spirit Bird.” Drue Heinz Prize judge David Guterson described the book as “a seasoned talent at work. It’s a collection set in disparate geographies and touching on disparate lives, but it explores consistently the terrain of loneliness and yearning.”

Nelson will either read a recently written short story or one from “Spirit Bird,” he said in an interview this week. He might also talk about his experiences as a birder — Nelson has 757 birds on his list.

Birding and writing often inspire each other, Nelson said in the interview. For instance, the title story of “Spirit Bird” takes place in a Yupik village in the Aleutian Islands of Alaska, where Nelson traveled in pursuit of a bird. In the story, a group of birders search for an exotic bird in the village and “things happen,” Nelson said.