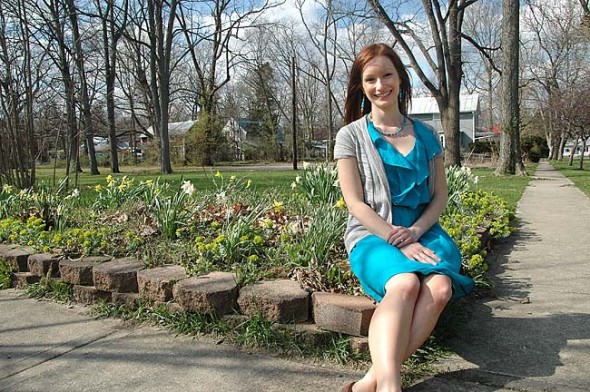 Ashley Lackovich-Van Gorp, who recently moved with her family to Yellow Springs, has founded a nonprofit, Enhance Worldwide, which aims to help girls in Ethiopia “navigate a pathway out of poverty.” She recently received a Ph.D. in Leadership and Change from Antioch University. (Photo by Carol Simmons)

A life of service abroad

The distance between Yellow Springs, Ohio, and Addis Ababa, Ethiopia, is about 7,500 miles. But both villages are close to the heart of Ashley Lackovich-Van Gorp.

Lackovich-Van Gorp is the founder and executive director of the nonprofit organization Enhance Worldwide (www.EnhanceWorldwide.org), which seeks to help girls “as they navigate a pathway out of poverty.” The all-volunteer group’s efforts are for now focused in Ethiopia, where Lackovich-Van Gorp and her husband, Dirk, lived and worked for about five years before coming to Yellow Springs with their two daughters in 2014. Ashley was finishing her dissertation through Antioch University’s Ph.D. in Leadership and Change program, while Dirk continued his work in international aid. He is currently a senior adviser with International Medical Corps, and Ashley now teaches at Antioch College and Sinclair Community College in Dayton. Daughters Lidija, nearly 8, and Darija, almost 5, attend the Antioch School.

The founding of Enhance Worldwide followed more than a decade of international humanitarian work for Ashley. A native of Pittsburgh, she attended the College of Wooster, in Wooster, Ohio, with an interest in anthropology and languages. But the devastation of the 2004 Indian Ocean tsunami grabbed her attention, and after graduation, she traveled to Indonesia to be part of the relief efforts. From there, she went to the Middle East, working with children in the Gaza Strip. She and Dirk met in Jerusalem, and they married in 2009, the same year they relocated to Ethiopia.

“We fell in love with it,” she said of the African nations, which she describes as beautiful and vibrant.

“I never envisioned doing any of this,” she said of what has become her life’s work. “I went to Indonesia, and after my assignment I was going to go to graduate school for German and French. But there is a responsibility in knowledge. It just seemed so in vain” not to act on that knowledge, she said.

Her current work followed a trajectory that began with general humanitarian aid, then moved to children’s issues, and then specifically to girls and girl child protection.

But along the way she became discouraged by some of the practices of aid groups with which she worked. “I’ve loved a lot of things about the organizations I’ve worked with. I’ve learned a lot of things,” she said. But the role of money and pervasive “imperialistic attitudes” of Western groups left her disappointed. “I thought, why don’t I start my own organization, based on ethics and best practices — try to do something different and try to make change.”

Enhance Worldwide was founded on those ideals, with Addis Ababa its first focal point. The effort is all volunteer, rejecting any possibility or appearance of profiting from poor children.

“Addis Ababa is a very impoverished community, with a lot of children who have lost one or both parents,” Lackovich-Van Gorp said. “Typically what happens (especially with girls) is they go to an orphanage. They have food and a roof over their heads, but they don’t go to school. They never leave the orphanage, so they don’t get any life skills. At 16, they walk out. Most end up trafficked for sex or labor or end up on the street.”

The orphaned children may not have parents, but many have other family members in the community. The extended families, however, can’t afford to care for them. Enhance’s goal is to support efforts that “already exist on the ground” and toward that end, one initiative is to help in identifying family members “and then alleviating the cost of taking in this extra child.”

But costs go beyond food, clothing and medical expenses. “Public school in Ethiopia isn’t free.” There is an enrollment fee, and students must buy their own uniforms and books. “Poor families can’t afford it,” Lackovich-Van Gorp said.

But without schooling, children are “at increased risk for street violence, child marriage, and trafficking,” in addition to the handicap of not being able to read or write.

“The number one way to prevent child marriage is to send a girl to school. If in school, girls are seen as a child.” If at home, marriage may be seen as a viable option.

Child marriage, either through a family’s direction or by abduction, was the focus of Lackovich-Van Gorp’s dissertation. Her research utilized the concept of “positive deviance.”

“The idea is that in every community there are individuals who have overcome challenges that their peers are struggling with.” The goal is to explore what those individuals have in common and try to replicate them. “The community already has all of the answers to the problem. What we do is help the community to discover those answers.”

For instance, “In the poorest part of the village, most all of the girls have been married by the age of 15. Most. What about the others? What did they do that others can do?”

But first, it was important to verify that “this really was an issue” for the community. She was told that the issue was a concern, but less so when a father has made a choice for his family. The problem for the community was “when a girl is stolen.”

That became the focus of her research. “We did identify positive deviant practices. The girls who were 15 and not married had mothers who had done something to keep them safe. All these mothers had been abducted themselves — and they talked about it, which is taboo. Another thing they did, they always took their daughters with them. They always knew where they were. These behaviors — they’re so organic — and they can be copied.”

The dissertation gave her data and methodologies that inform Enhance’s ongoing work with the girls of Addis Ababa.

While her Ph.D. research came out of her work in Ethiopia, it also introduced her to Yellow Springs — through Antioch University’s temporary residency structure. She got to know the village a little during her periodic visits to the university’s Midwest branch and saw something special in the community.

She said the family decided to move here to give her some emotional distance while she wrote her dissertation and also to introduce the girls to life in the U.S. They had visited the States each year, but she wanted them to know that life in the U.S. “wasn’t just amusement parks and ice cream.”

In addition, life in Yellow Springs is unique. “It’s not like other places,” she said. “We love it here.”

“We’ve brought pieces of Ethiopia with us to Yellow Springs: music, food, paintings, clothes and books. Many members of the community support Enhance, which makes me feel like we’re taking a bit of Yellow Springs to Ethiopia. It’s a blended life.”

And while the family may spend some future time overseas again, “this will always be home.”