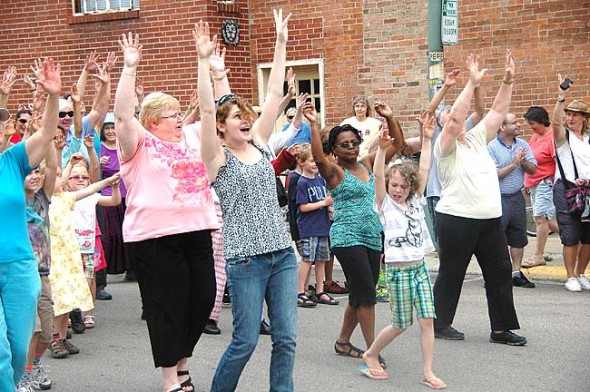 A second flash mob in as many years will take to Short Street to the tune of “Shout” on Wednesday, May 27, at 1 p.m., followed by a party at the Yellow Springs Senior Center. Participants of any age can learn the 2-minute choreographed routine at rehearsals at the Senior Center or online. Last year’s flashers danced to “Heard It Through the Grapevine.” (News Archive Photo by Suzanne Szempruch)

A short dance on Short Street

Do you ever just want to kick your heels up and shout? How about throw your hands up and shout? Throw your head back and shout? In observance of National Senior Health and Fitness Day this year, and just for the fun of it, the Yellow Springs Senior Center will lead a flash mob to “Shout” in all those ways on Wednesday, May 27, at 1 p.m. on Short Street.

Traditionally part of the appeal of a flash mob is the surprise element of the performance. But since it’s hard to catch a random throng to perform in the village, this event is more mob than flash, YSSC activities coordinator Corinne Pelzl said. But, she added, because the music is just two minutes and six seconds long, “there is a certain amount of ‘flash’ to it.”

A party in the Senior Center Great Room, 227 Xenia Ave., will follow.

Surprise forgone, rehearsals can be publicly advertised. Choreographer and yoga teacher Katy Gaines has created a dance routine to the music that anyone and everyone can master. The movements involve rythmic step, light bouncing, swaying and arm circles, and can be done as big or as small as individuals feel moved to do, Gaines said. Participants are invited to join rehearsals with an instructional video Gaines created on May 21, 22 and 26 at 10 a.m. and 3:30 p.m. in the Senior Center Great Room. Residents can also learn the moves through the YouTube video called “Yellow Springs Senior Center Dance Moves.”

In conjunction with the flash mob, Yellow Springs Mayor Dave Foubert will proclaim May 27, 2015 National Senior Health & Fitness Day in the village. After all, President Obama has designated May as Older Americans Month and National Physical Fitness and Sports Month. According to the proclamation, “it is appropriate (indeed awesome!) to honor our older adults for their many contributions to the vitality and strength of our community and … the United States Surgeon General has determined that regular physical activity results in significant health benefits and improved quality of life for older adults.”

At the insistence of Senior Center Director Karen Wolford, the Senior Center organized a Short Street flash mob last year to the music of “Heard It Through the Grapevine.” Over 100 people of all ages, including a group of Mills Lawn students, came.

“I’m hoping to get as many people on the street again this year,” Pelzl said.

And because the event is short, participants are encouraged to arrive early.

Gaines is a local resident and an instructor at the Kula Cooperative, a local collaboration of yoga and movement teachers.