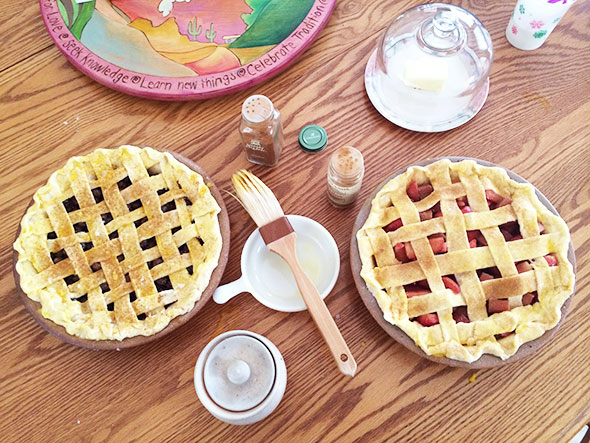 On Monday I was downtown passing the Sunrise Cafe in the fading light of the day. Among the specials listed on its outside chalkboard menu were the words Strawberry Rhubarb Pie. I turned smartly on my heel and entered the cafe turning sharp left again at its tea cup lined partition. The vaulted room beyond had a rare booth free and, on cue from the wait staff, I sat myself next to a painted spider and occupied myself with trying to resolve the various landscapes featured on the cafe’s south-wall mural. 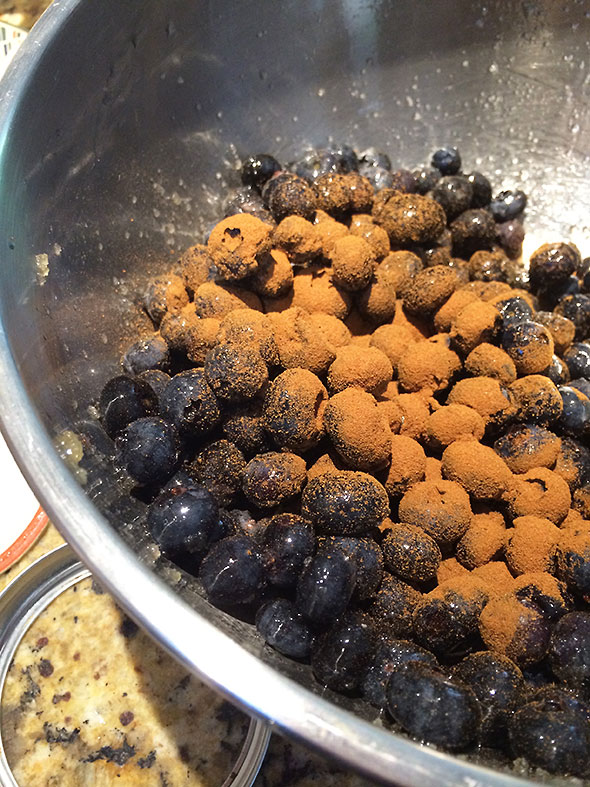 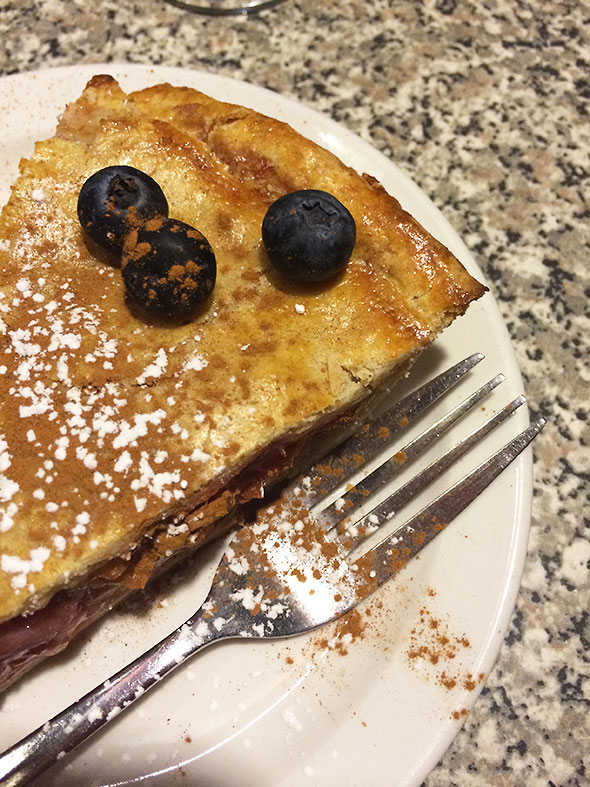 Jacqui Creepingbear set down a slice of pie with a smile that charms all, and I lifted my cinnamon-flecked fork to take a first bite. The fruit of the pie was sliced into pieces the size of walnuts and the crust was golden brown with a glossy finish. The three blueberries on top seemed to wink in promise. “If you like this slice,”—oh, and I did!—“wait until you taste our blueberry pie.” The strawberry rhubarb pie safely tucked away, I paid my bill and crossed the street to Tom’s Market. Inspired to act, I stocked up on fresh organic berries and stalks of rhubarb as thick and long as the neck of a violin. I was going to make pie. 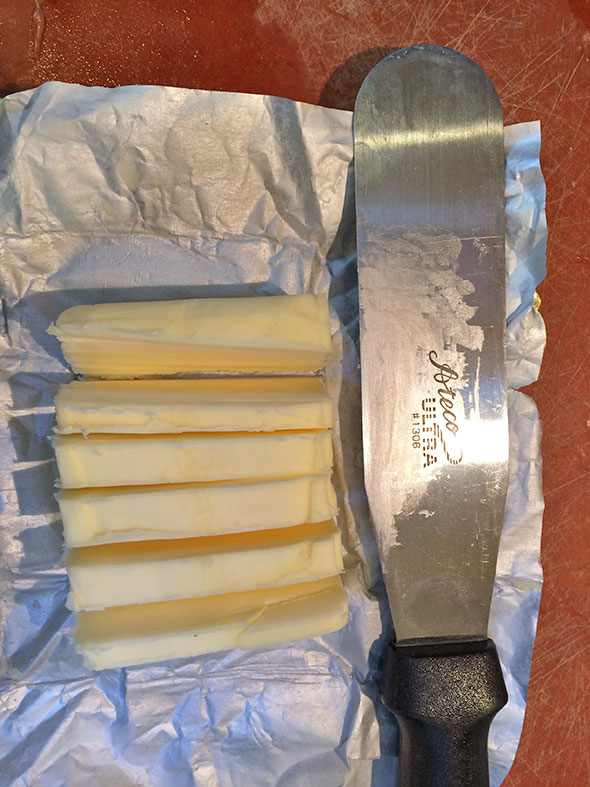 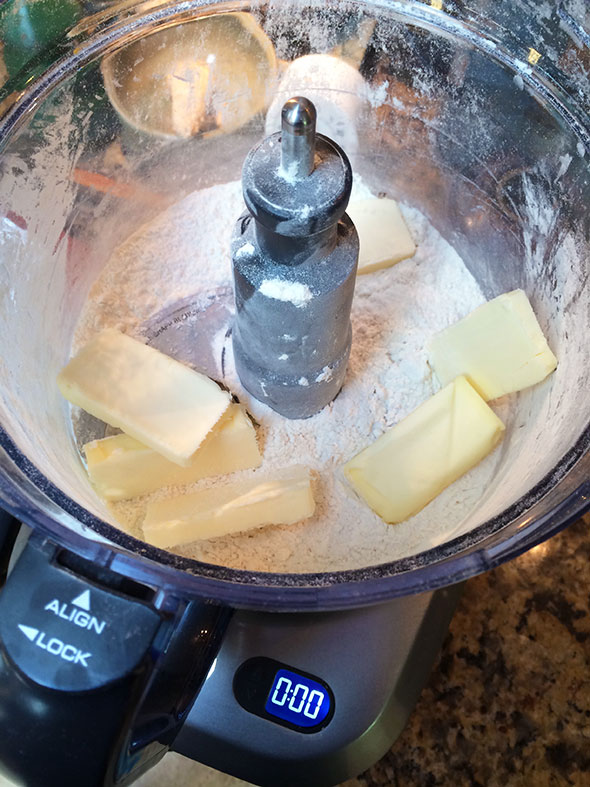 My resolve was not born of pure spontaneity but to a specific purpose. About mid April, the thought occurred to our neighbor Phyllis Logan that, over the past two years, the block has had a significant amount of turnover in residents. We were overdue for a block party. As the resident whose tenure is second to longest on the block, she took up the charge of organizing a meet and greet and invited the neighborhood—some 12 families—to a Sunday afternoon tea. When the tea was threatened by rain, she deftly pivoted herself and reorganized a evening party of beverages and desserts for Tuesday. I promised to bring ice tea and pie. With the exquisite model from Sunrise Cafe forward in my mind, I decided to bring two pies: one strawberry rhubarb, one blueberry.

I wake Tuesday morning and, before breakfast, make three batches of pie dough…two rounds for bottom crusts and enough leftover, perhaps, to form a lattice over both pies. While Jeremy slices the berries and rhubarb, I slice 4 ounce cubes of butter into a dry mixture of flour, sugar, and salt. I pulse the mixture in our food processor for six seconds listening to the butter collide against the processor’s mixing chamber…the sound changing swiftly from hefty pads to dainty plinks. 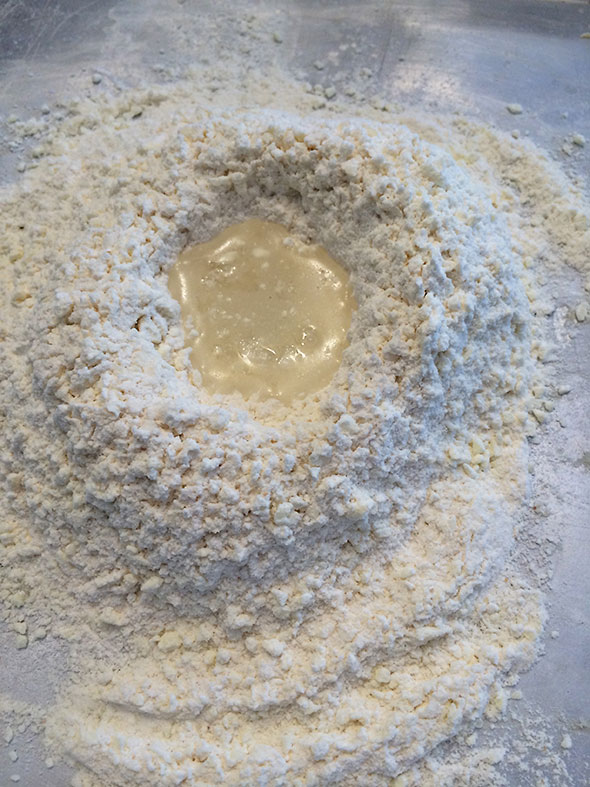 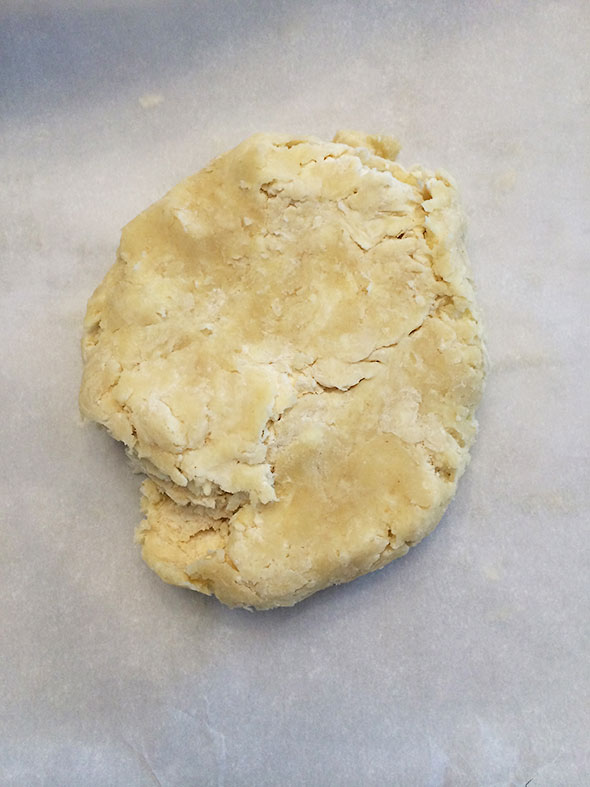 Next, I pour the crumbly flour onto a sheet pan and form a deep central well in its cool mound. I add four tablespoons of ice water—two at a time—and work the dough modestly by gently introducing the water throughout and then pressing the mixture together to see what holds its shape. I separate any dough that successfully holds together—even just barely—and dribble small doses of ice water on the flour mixture that falls away until it too takes shape. With slightly damp hands, I form a single round by pushing together sections of dough. I stop when I can flatten the dough ball to a thickness of two inches without the ball falling apart into pieces. 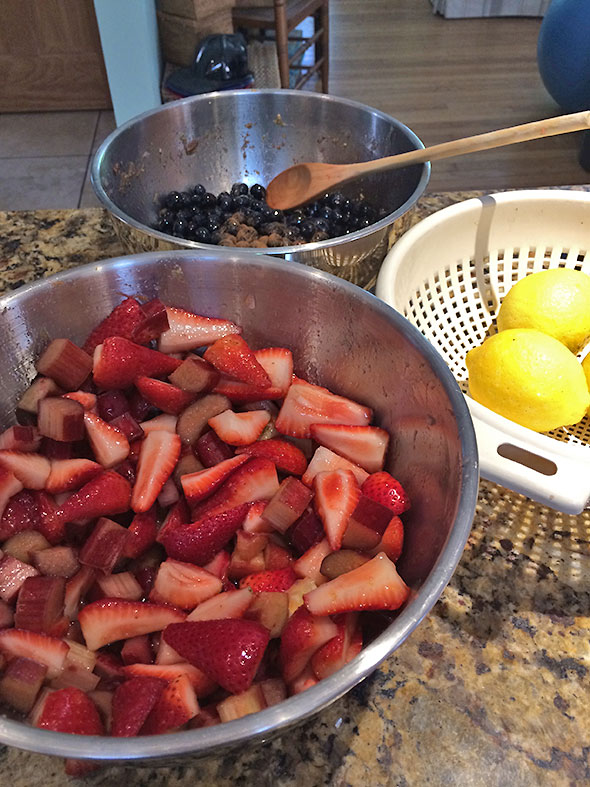 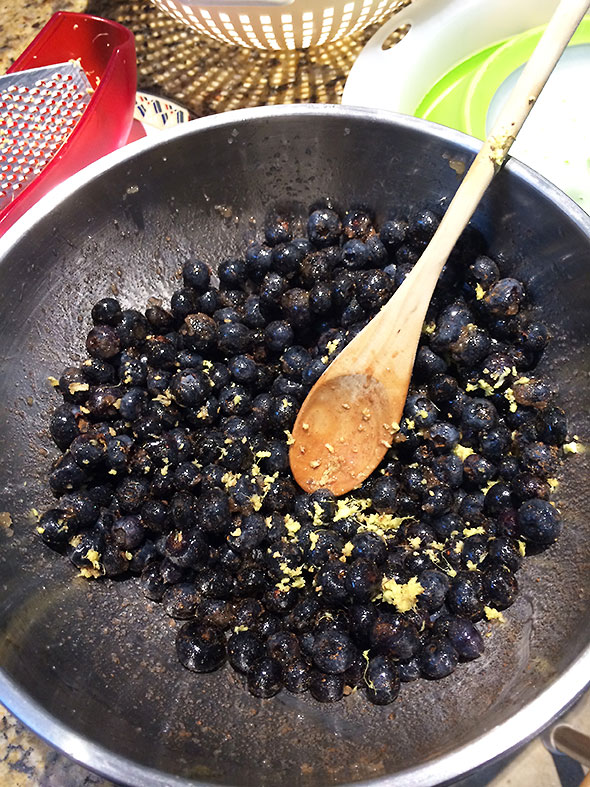 With three rounds of dough chilling in the refrigerator, I relieve my husband from kitchen duty and take over seasoning the berry filling. Jeremy hunts down a jar of late season honey—gifted to him for tutoring this fall—from our pantry, and I add its sweetness to the bowls of berries. I coat the two pints strawberry and a pound of rhubarb with a quarter cup of honey and the two pints of blueberries with about the same. I split the zest of two lemons and the juice of one between the two bowls of fruit. To add a compelling zing to the lemon dressed blueberry, I shave a bulb of ginger over the dark berries and coat them with a healthy dose of cinnamon. Finally, I lightly salt both berry mixtures to taste, and allow the fruit sit while I transition the kitchen.

I put away the honey jar, sheet pan, and food processor and pull out a rolling pin along with two of my favorite dishes…stoneware pie plates from Miami Valley Pottery. I have just set the kitchen when my four year old joins me. He misses hardly a beat to take in the situation before he sets a stool next to my hip and goes to the pantry to collect his own favored rolling pin from the cupboard. 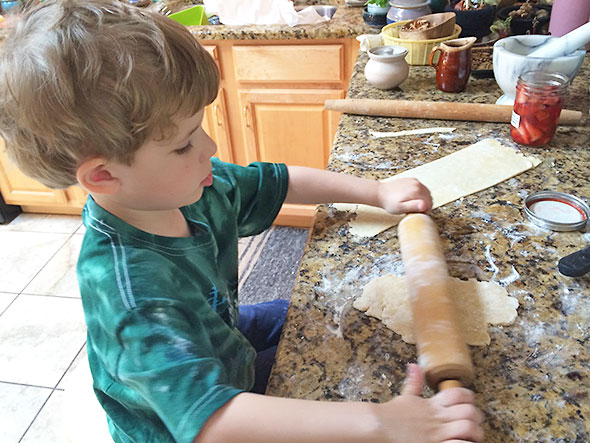 Happy for his experienced help, I work along side of my young pastry chef as we flatten a round of dough on the floored surface. Rolling the dough a few strokes, we rotate it clockwise, reflour the pin and the dough to a satin finish, and repeat. We flip the dough after a couple of repetitions making sure the countertop is well floured and no part—pin, dough, or counter—becomes sticky. 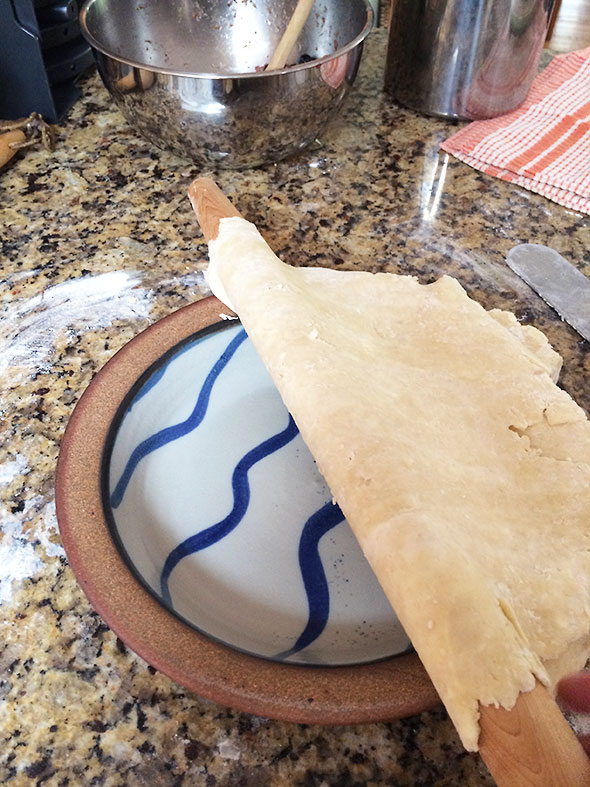 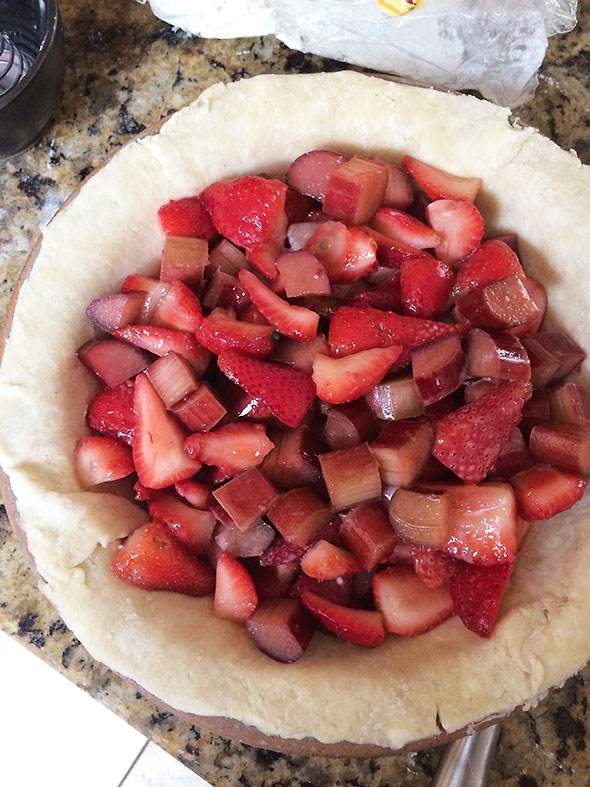 When we roll the dough flat to the necessary width, I drape it over my longer rolling pin and transfer it to one of the pie plates. Before adding the filling, I taste the juices that have separated from the berries and make adjustments…a touch more honey to the strawberry rhubarb, more cinnamon and salt to the blueberry. When satisfied, my son and I add a quarter cup of tapioca flour as thickening agent to each mixture and load the first pie with strawberry and rhubarb. 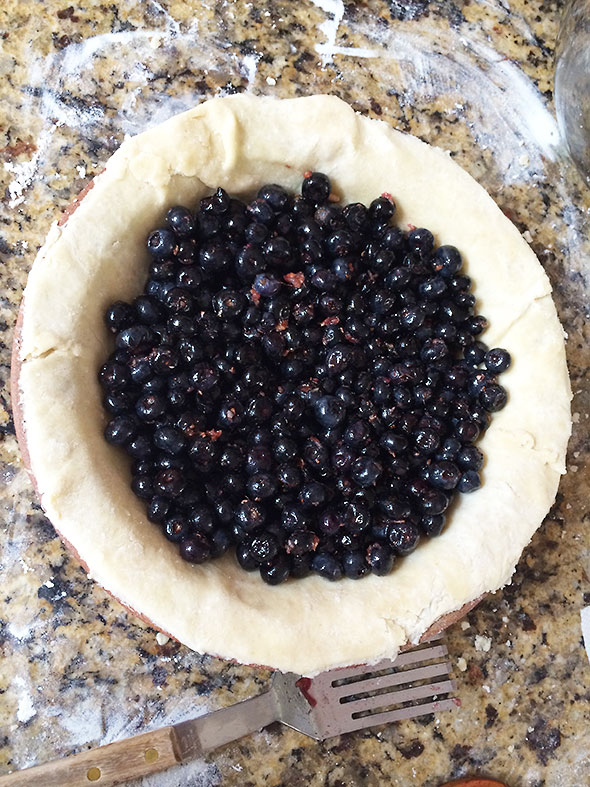 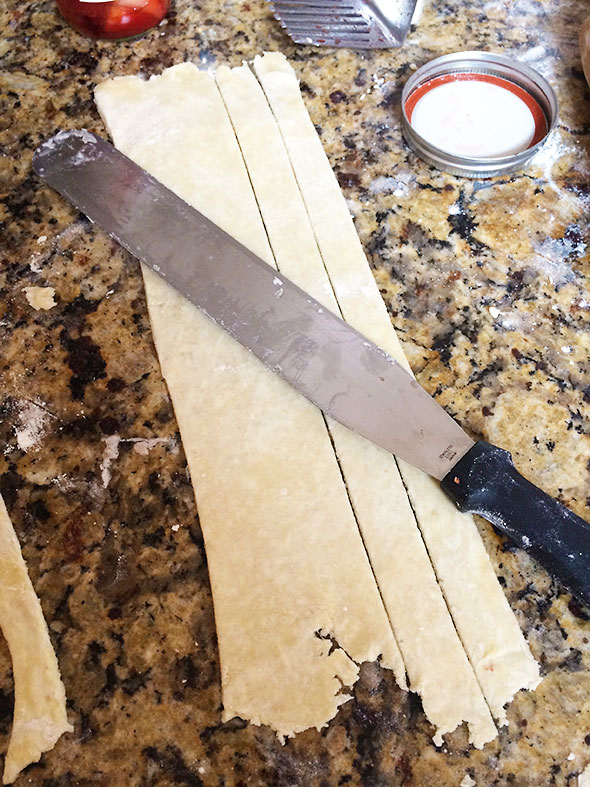 After we roll out the second crust bottom and fill the second pan, my son asks if he can eat pieces of salvage dough that we trim from outer rim. I hold him off not knowing how much dough we need to top the pies. After adding the blueberries to their pie plate, we roll out the last dough round and the accumulated pile of dough salvage then review the mechanics of forming a pie crust lattice. My son helps cut long strips of dough and place them strategically. Together, we flip pie dough scraps back and forth across the filling and weave in new strips. Once we form an interlocking mesh over each pie, I hand over the remaining four scraps of dough. He grabs a plate and a tall cup of milk and enjoys his spoils in great luxury at the dining room table. 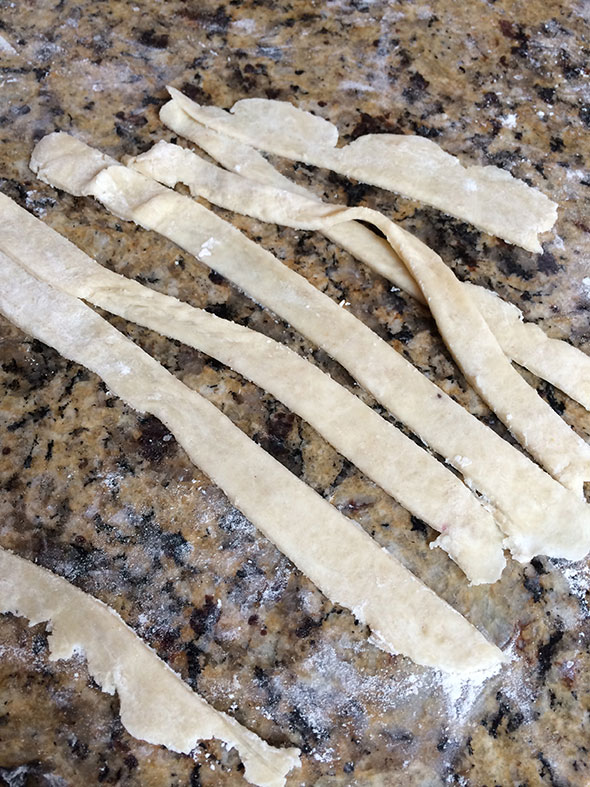 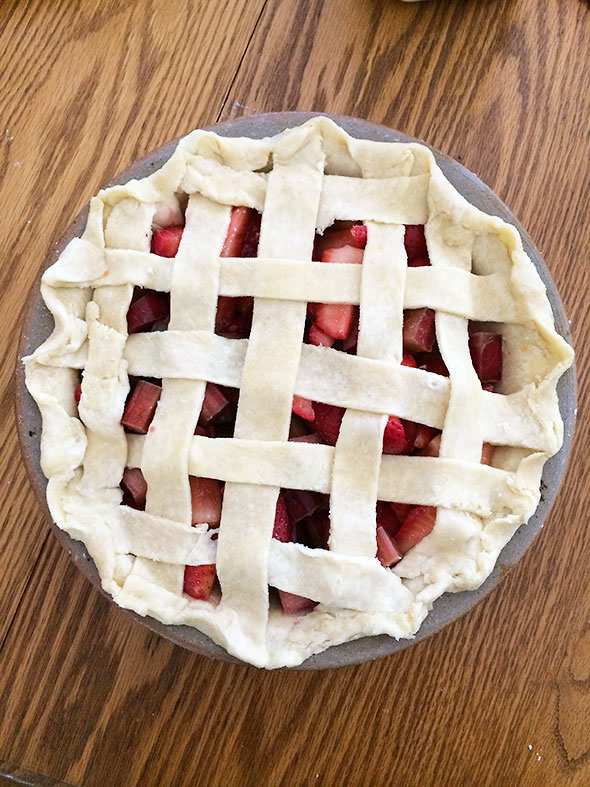 While the boy snacks, I separate a egg yolk from its white and add a splash of milk. With the pale yellow mixture, I paint each lattice lightly. Making my and then add my final touches, I give the top of the strawberry rhubarb a dusting of cinnamon and sugar then powder the blueberry pie with straight cinnamon and a light dose of kosher salt. The pies go into the freezer to chill. After a few minutes clearing the decks of cooking supplies, I move the oven racks into position and preheat the oven. 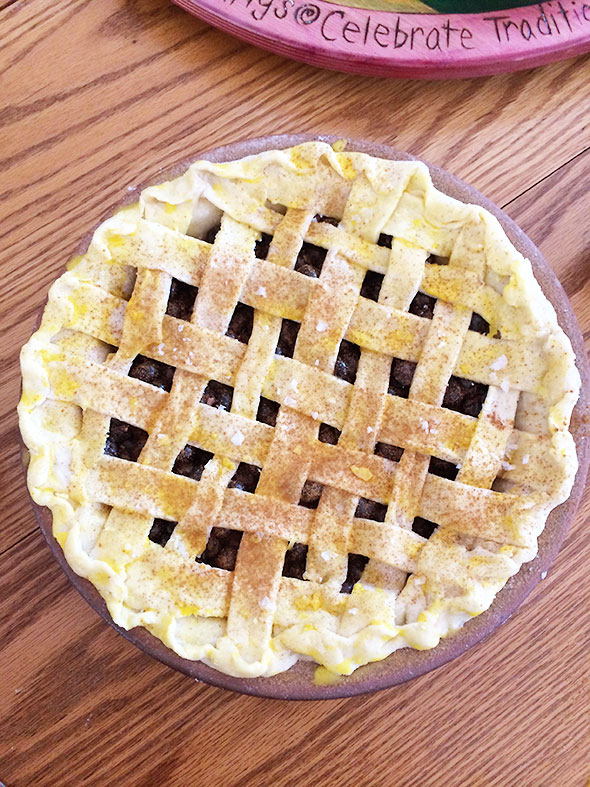 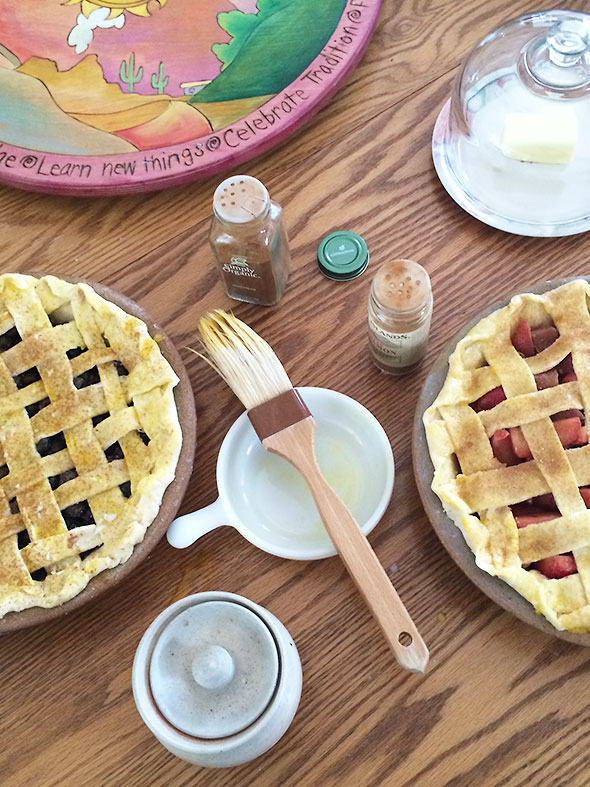 I sweep the chilled pies into a 425 degree oven when it reaches temperature. After five minutes of intense heat, I dial back the oven down to 400 degrees and keep the pies there for 20 minutes. Then, I cover the edges of the pies with foil to protect them and dial the heat back again to 375 degrees. Here, I hand off the cooking to my husband Jeremy who promising two things: He’ll remove the pies in 45 minutes, and he will keep our son from helping himself to one or more of the pies. Our son has left his plate on the table—clear in his instruction to leave it there for when the pies are ready—and I leave it to my brave husband to break our boy’s funny little heart. 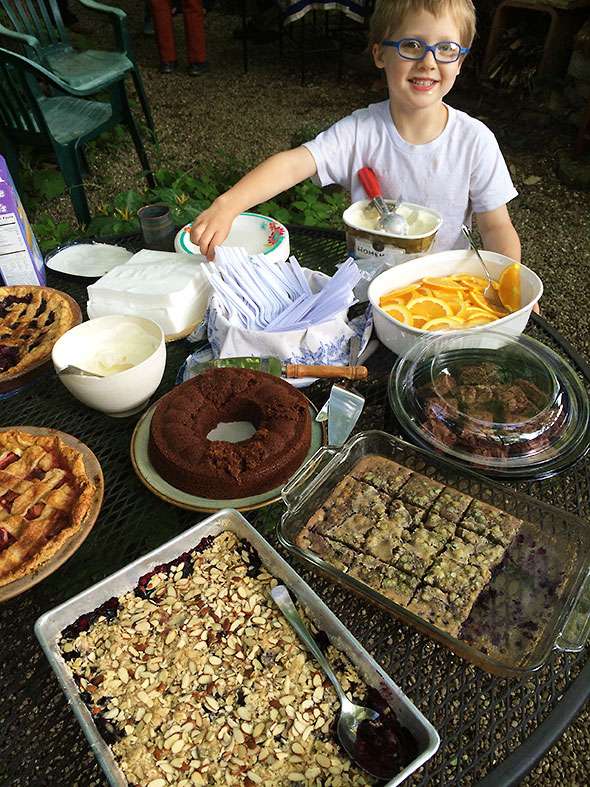 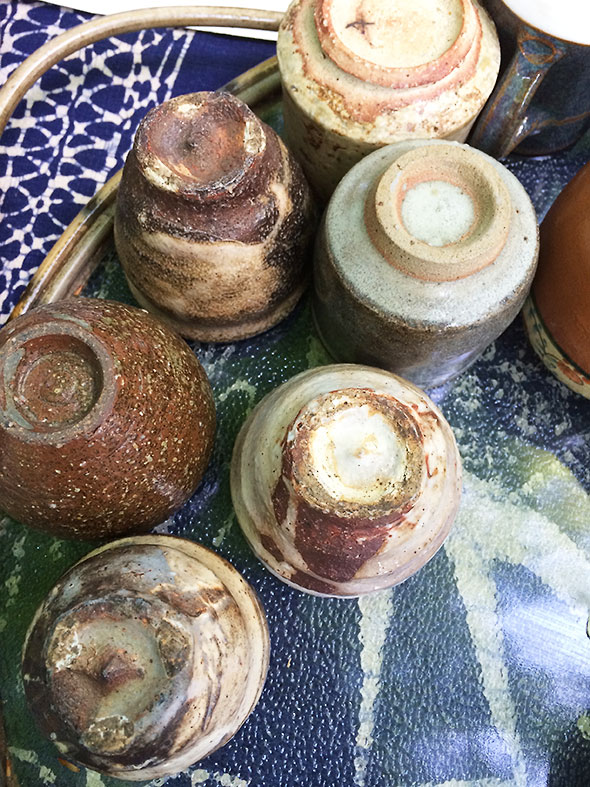 When the neighborhood converges for the evening, we laugh over the number of us who bring a blueberry themed dessert. Besides the blueberry pie, crumble, cobbler, and cake, we taste ginger cake, brownies, watermelon and orange slices, and fleshly whipped cream. We pour tea and coffee—some iced, some hot—into stoneware mugs, and the ten families in attendance trade stories of our comings and goings about the village of Yellow Springs. The children explore the garden of our hostess—cutting through patches of wild ginger, trillium, and budding geranium—and place a reverent sign along its winding path that reads Magic Garden. The adults finding magic ourselves in the evening, we raise a reverent toast to Phyllis for bringing us together and so snugly. At the end of the evening of fellowship, we map our way with stories instead of street numbers in a place that feels ever more of home.