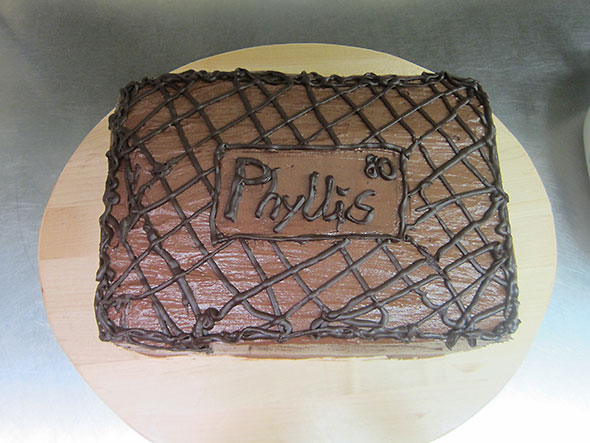 A couple of weeks ago, the family and I were out in the garden when our neighbor Phyllis Logan biked up. She handed us a flier, an invitation to her 80th birthday party. The flier boasted a bang up evening: a dish to pass, birthday cake, a bevy of outdoor and indoor games, and a live band. It was to be held at the Outdoor Education Center at Glen Helen. 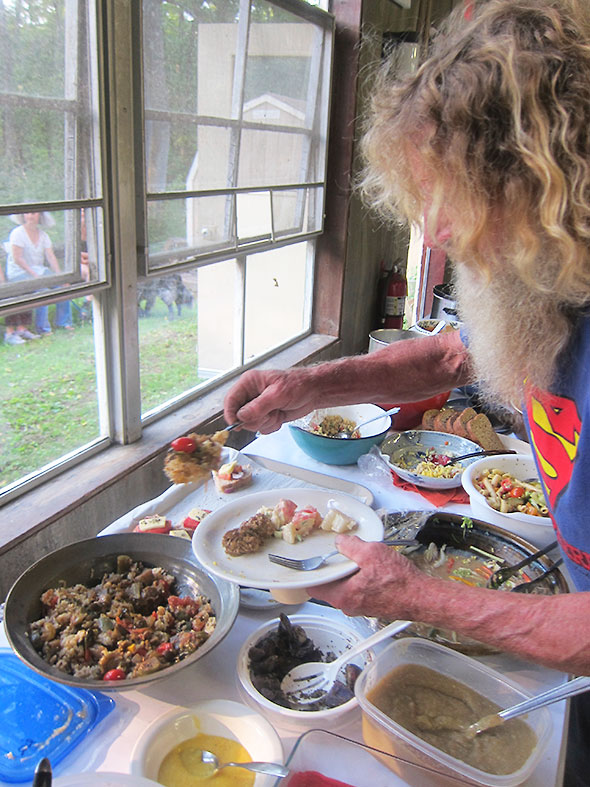 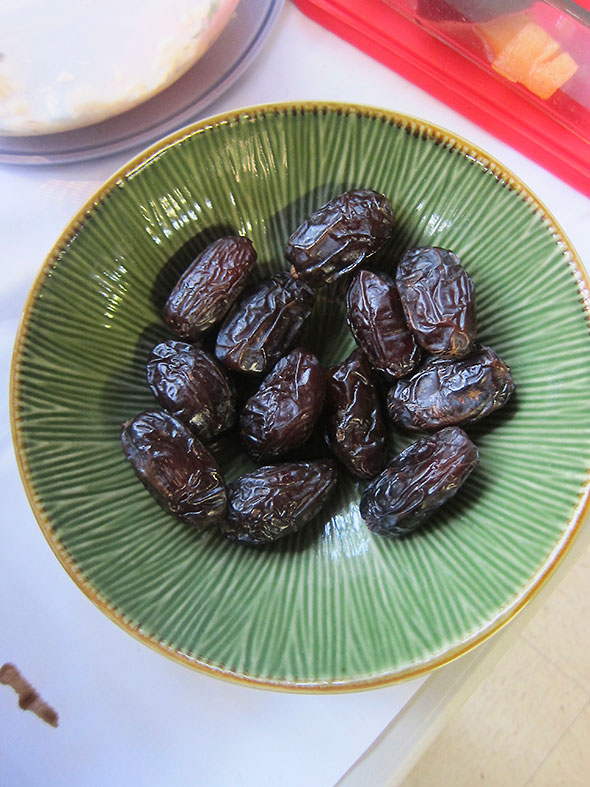 When we arrived on Saturday, the kids found a bouncy house on the west side of the education lodge. They didn’t make it an inch further joining the children there for a solid hour. Continuing inside, Jeremy and I found the band setting up in the east alcove within a circle of black-upholstered couches and right next to the red glow of a snake tank—a fitting location we decided. In the main hall, long tables were covered with paper and various writing instruments. On the first table, someone had drawn a rolling landscape in crayon, and I added a blue bird sitting in a tree to one round hill. Above the drawings, vases of fresh summer flowers graced each table: towering sunflowers, daisies, black-eyed susan, lavender, and hydrangea. 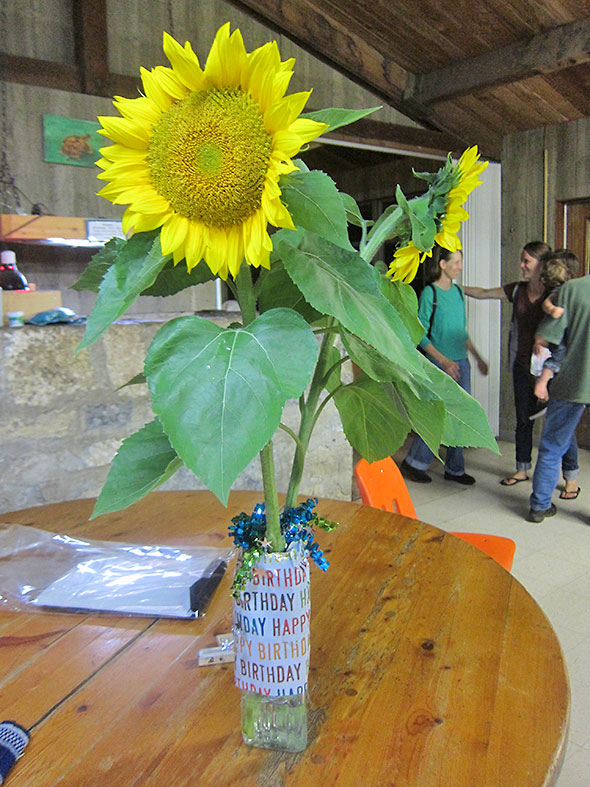 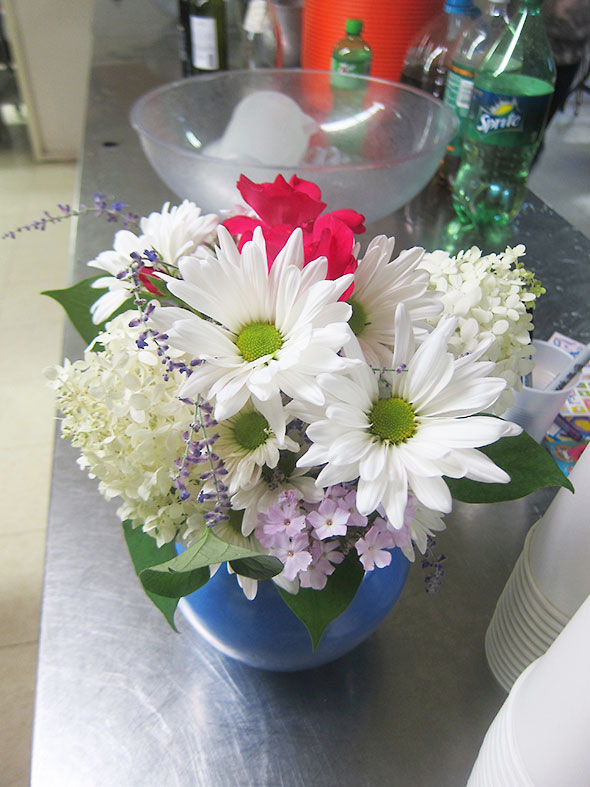 Phyllis looked elegant in an embroidered kaftan dress. Well attended, she greeted us with teasing ease, and we promised ourselves to her for the evening. With a flourish, we added our plate of prosciutto wrapped cantaloupe to the food table along with a few bottles of ginger beer and hard cider. I poured red wine, embellished the cup with my name and a unicorn sticker, then took an exploratory spin around the lodge. 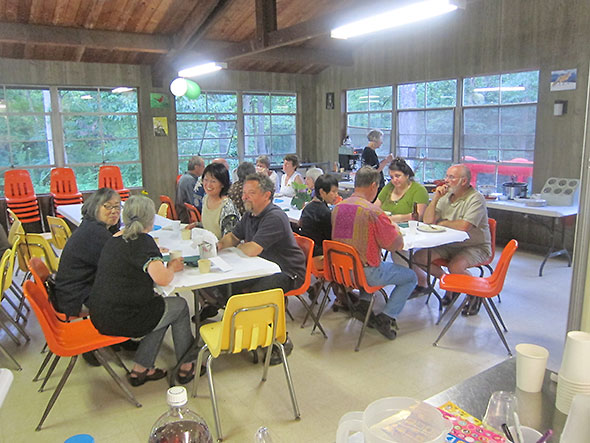 We’ve been to the Raptor Center on the north side of Glen Helen, but this was our first time in the main lodge. It has good sized hall with lots of windows and bright orange and yellow chairs. An industrial kitchen with steel counter tops runs along the north side of the hall, and I found many an excuse to wander through. I first went in to peek at the two-layer double-chocolate birthday cake and later to load dish racks for the impressive commercial dishwasher. On the north wall just east of the kitchen, a beautiful mural features the animals of the Glen. My son finally came inside to take a drink from the fountain on the mural wall and, there, exchanged looks of interest with the painted fox sitting among the brambles. 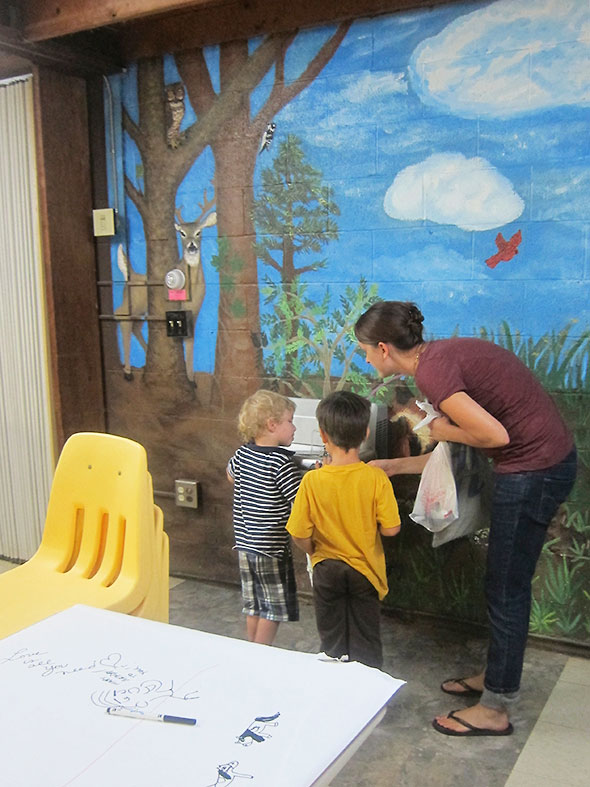 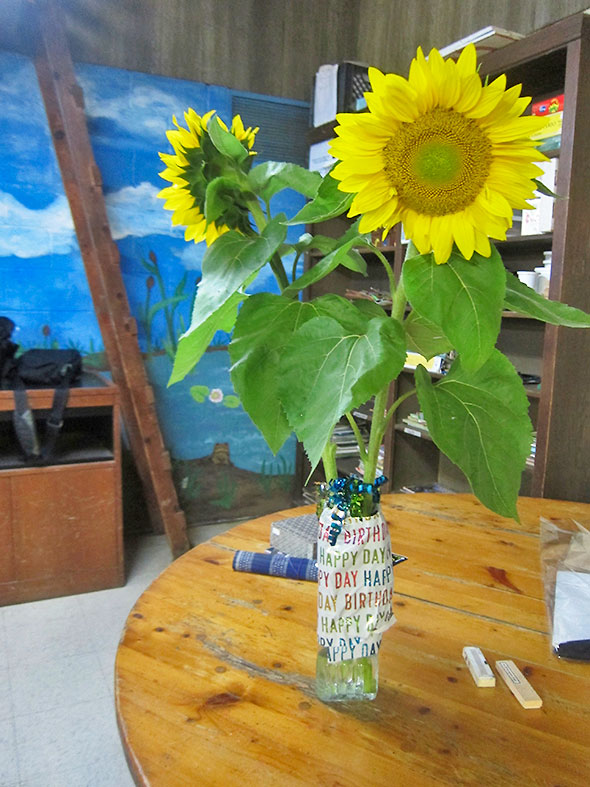 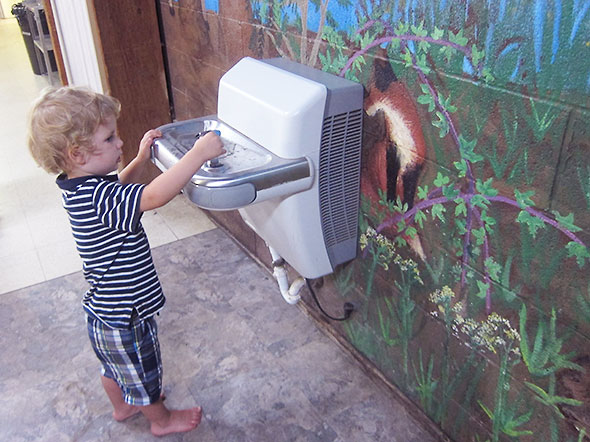 The birthday party guests kept the buffet table well stocked. Though we readily partook, the table remained full as new edible gifts arrived throughout the evening. For dinner, I filled my plate with freshly made apple sauce, tomato pie with a gluten-free savory crust, pickled beets, dates, and sweet corn salad. My favorite dish was a squash soup, golden yellow and buttery sweet, though the fresh melon brought from the morning’s farmers market and prepared by my husband was in the running. 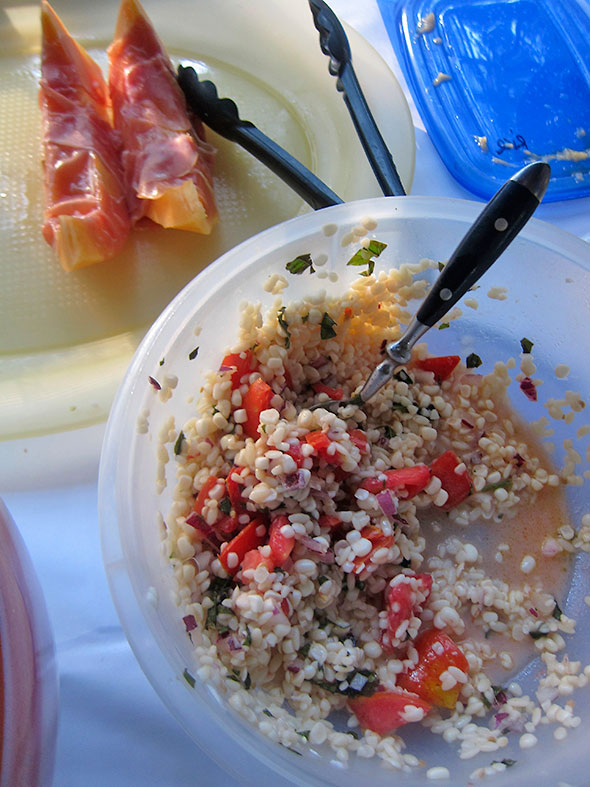 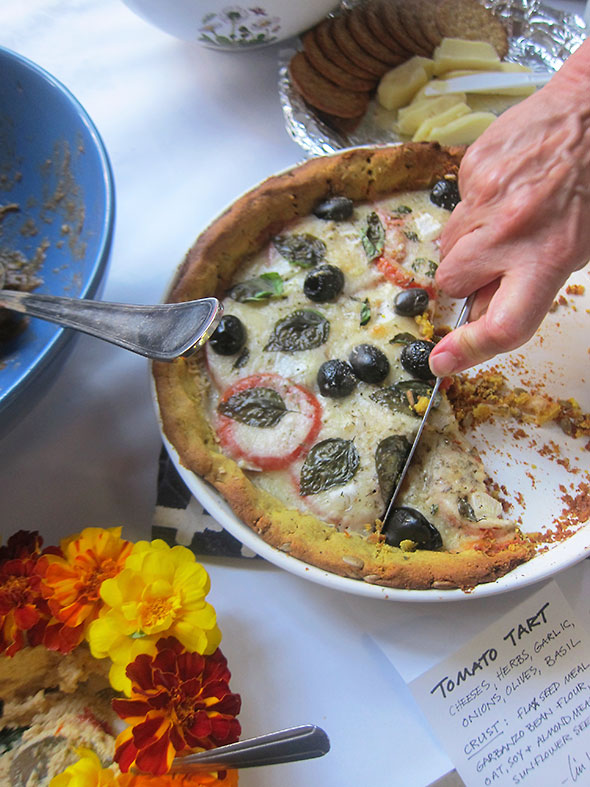 When the time came to gather for cake, Sam Eckenrode decorated the chocolate cake with bright blue candles, and Phyllis herself lit them. She gathered her family together to blow out the dancing candles and then made the first cut into the deep moist layers of the cake. The knife was passed along to me once I dutifully promised to cut enough slices for all of the guests. The cake was rich and flanked by gluten free brownies and a blueberry crumble; the bounty was just enough for the big jubilant crowd. 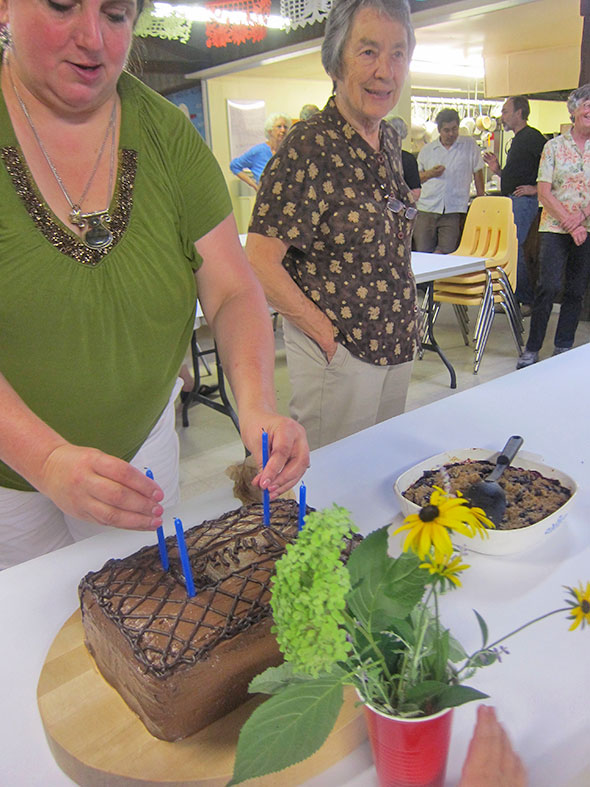 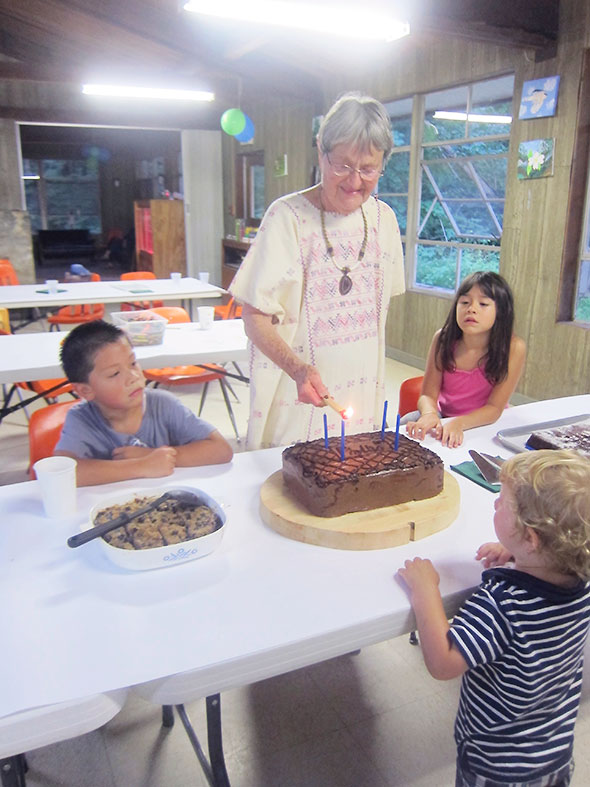 After cake and crumble, the band took stage. Mack and the Rockets treated the crowd to slices of rock, blues, and country. Lori Askeland and Ed Cambell traded lead vocals and barbs in “Honky Tonk Angels”, and “Summertime” rang through the hall strong and true. When the band fired up “Your Momma Don’t Dance and Your Daddy Don’t Rock and Roll”, they were clearly singing about some long distant generation. All those present—including the birthday girl herself—could most certainly dance. 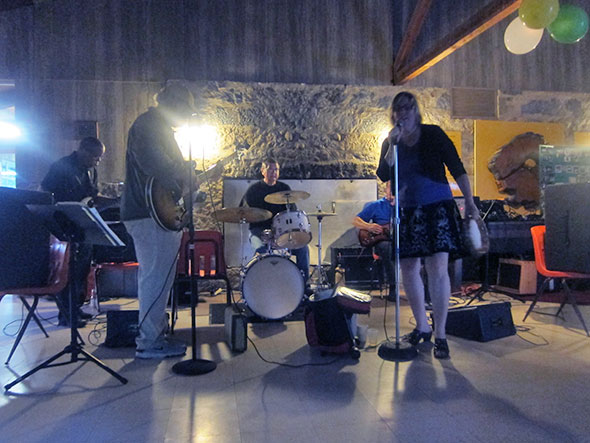 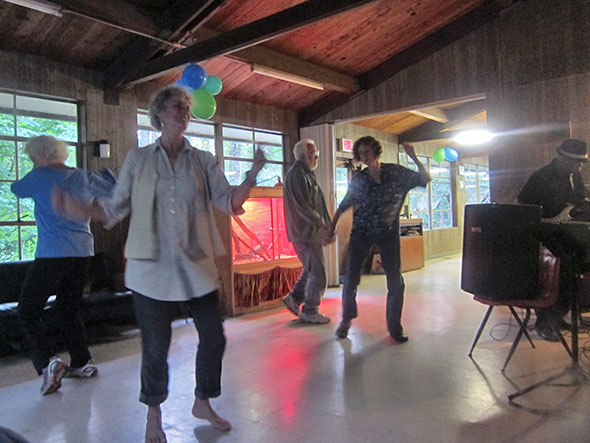 Near the end of the evening, we cleared the plates and the game tables came out. Phyllis took up backgammon with a friend rolling out a beautiful painted cloth to serve as the game board. Card games—cribbage, gin rummy— and the gem collecting game Mancala were also underway. I had a powerful wish to be in multiple stations at once. Enchanted by the marbles of an heirloom set, Kat Christian and I began a game of Chinese Checkers. Next to us, my daughter drew challengers for a round of YS Monopoly. 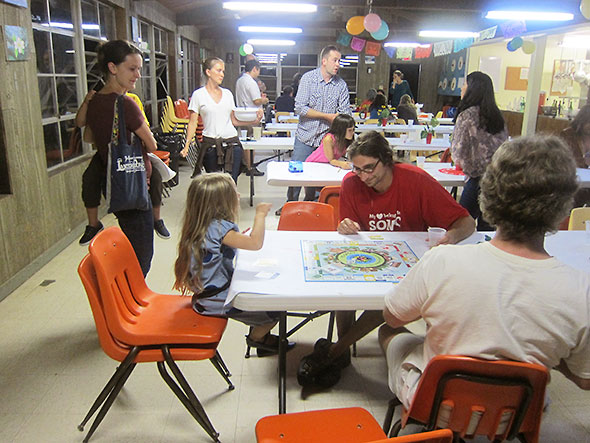 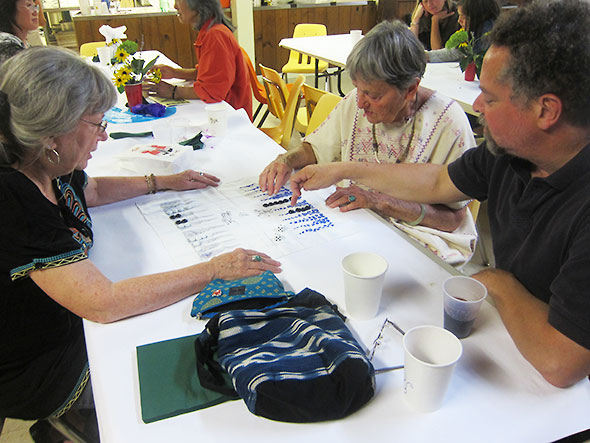 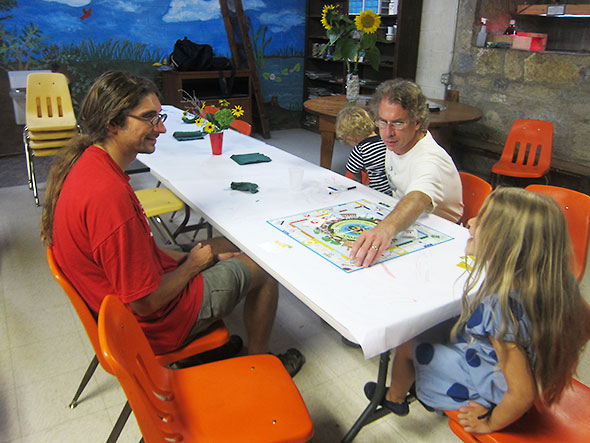 We stayed until our young three year old began swiping game pieces. He had collected a silver balloon from the monopoly set and a few marbles before we cried uncle. We reluctantly said our goodbyes, kissed sleepy baby heads about the room, and gave the birthday girl a final hug.

We wished her many, many more and…don’t you know…she’s begun planning her 90th birthday party.