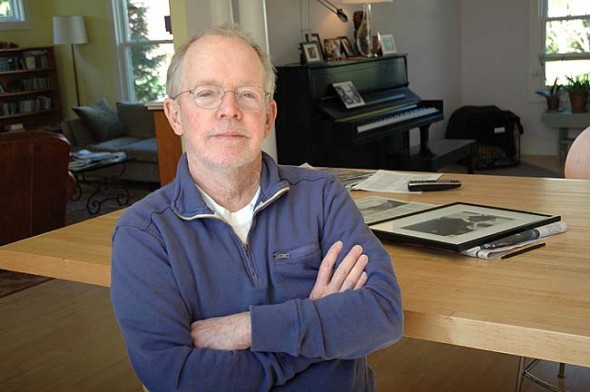 Local resident Noah Adams will give the Antioch University Midwest commencement address on Sunday, May 3, at Kuss Auditorium in Springfield. Adams is a long-time National Public Radio host and currently contributes stories about people and places in the Midwest. (Photo by Lauren Heaton)

NPR Contributing Correspondent and local resident Noah Adams will give the address at the Antioch University Midwest commencement to be held Sunday, May 3, at 2 p.m. at Clark State Community College’s Kuss Auditorium. Adams spoke to the News last week about his attachment to and belief in National Public Radio. As a 40-year veteran reporter, Adams led his own interview, which generated the following questions.

How did you get into radio journalism?

I started out as a staff announcer at the University of Kentucky in my late 20s. I was playing classical and progressive rock and bluegrass, but I wasn’t all that involved with music. Then an environmental issue came along: a congressman wanted to dam the Red River. I’d hiked in the Red River Gorge, and camped there and couldn’t see why there needed to be another flood control project. There wasn’t much in the newspapers so I did a radio piece and sent it out to 30 Kentucky stations. The Army Corps of Engineers dropped the project and I liked to think my story helped.

Since joining NPR in 1975, where you co-hosted All Things Considered for more than 20 years, what kinds of stories have you found the most compelling?

When Hurricane Katrina hit the Gulf in late August 2005, I wasn’t one of the early reporters to file, but I did go to New Orleans in late September, and then spent a month living in a FEMA trailer at an emergency center in Mississippi.

And I’ve found good stories while I’ve been based here. The O.S. Kelly Foundry in Springfield makes all the cast iron plates for Steinway pianos. Two craftsmen there work all through the night with the molten metal, making 4,000 plates a year. The sound was great and the pictures for the NPR website were wonderful. And it was my local piano tuner who gave the idea for the story.

In 2013 I was in Iowa doing a story about rye whisky when I saw a flash of neon orange as a young girl came riding her bicycle down the street, with a canvas bag of newspapers across her shoulder. She was delivering the Carroll, Iowa Daily Times Herald, and I found out this was one of the very few newspapers in the country using young carriers. That’s the story I went back for a year later.

And in the winter of 2014 when the chemical spill hit the Elk River at Charleston, W. Va., contaminated the water supply for 300,000 residents in nine counties, NPR sent me to the Elk headwaters, and then on a trip downriver to report on the impact there.

Late fall I found a special pizza place in Norwood, north of downtown Cincinnati.  It was called Moriah Pie, started by a couple who were doing Christian missionary work in the neighborhood by helping raise organic vegetable gardens.

The café was only open on Friday evenings. The pizza and salads and desserts were wonderful. There were no prices on the menu chalkboard and you paid what you could afford.

It was great to be there with the young couples and kids, and the older folks, even the homeless. The story hadn’t been in the news in Cincinnati and I kept thinking about all the cars flying through on the interstates with no idea of something like Moriah Pie.

Why are these kinds of stories important?

Long ago at the Highlander Center in Tennessee Myles Horton, the founder, who always worked for social change, told me, “The people who have the problems are the ones who have the answers.” I like to stay away from the experts, and the lawmakers and just go straight to the community. NPR lets me do that and that’s why we have helped so many places. Stations like WYSO (whose general manager, Neenah Ellis, is Adams’ wife) have first-rate reporters, and they’re doing national work.

I was on the air when 9/11 happened. Until deep in the night that day. All Things Considered and Morning Edition became community stations in a way. We were just talking with people all around the country, by way of the trusted local signals. I could feel then how strong public radio had become.

How did you come to live in Yellow Springs?

Neenah and I had long wanted to leave Washington for a small town. We’d spent much of the summer here, in 2002, doing research for a book about the Wright Brothers. We knew (local filmmakers) Julia Reichert and Steve Bognar, and we often thought, “why not move to Yellow Springs?” When Neenah decided to take the WYSO job, we decided to make the move, and I continued to report for NPR.

What is your connection to Antioch University Midwest?

When I was asked to come speak, I thought, these are graduating students who are trying to do something good in the world. We can share experiences.

Kuss Auditorium is located at 300 South Fountain Ave. in downtown Springfield. Doors open at 1:15 p.m. Tickets are not required to attend the commencement.