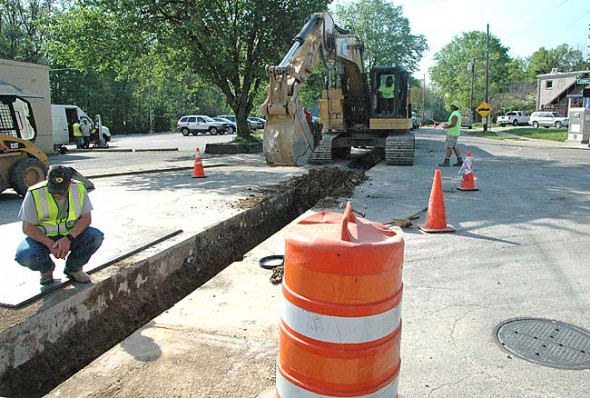 Village Supervisor of Electric and Water Distribution Johnnie Burns, at left, is shown last Friday on Corry Street overseeing the work of GM Pipelines crews working on the water system loop completion project. To facilitate water flow, the GM crews are replacing old 8-inch pipes with 10- or 12- inch pipes at three locations: downtown, on the Antioch College campus, and on Herman Street. The project should be complete at the end of May. (Photo by diane Chiddister)

This month villagers may notice more construction crews than usual around town. The crews are working on the loop completion project of the Village water system, which aims to improve water pressure and fire flow to downtown businesses, residents and Antioch College.

Last week crews from GM Pipelines of Westchester worked on two sites, Herman Street near Xenia Avenue and Corry Street between Dayton and Xenia Avenue downtown. The sites were two of the three gap areas in the Village water distribution system that still had old, 8-inch pipes, as compared to the larger 10- or 12-inch pipes in  newer sections of the water system. The smaller pipes impede water flow, according to Village Manager Patti Bates last week, and the purpose of the project is to improve flow to downtown businesses and residents, along with the college.

“Everytime a larger line hits a smaller one, it’s like hitting a wall,” Bates said, so that some downtown businesses that use lots of water, like Williams Eatery, has suffered from very low water pressure, a situation that should improve following the new construction.

Downtown, the GM crews completed the pipe replacement from Dayton and Corry streets to Corry Street just south of Xenia Avenue last Friday, May 8, after which water with added disinfectant flowed through the new pipe for 48 hours. After that, the disinfected water was sent to a lab for testing, and after being declared clean, freshly disinfected water was again sent through the new pipes. The two disinfecting and testing cycles take about a week, and, if both tests run clean, the new pipes are scheduled to be tapped into the downtown businesses around Friday, May 15 .

After the GM crew completes the downtown section, a restoration crew will return  Corry Street to its previous state. The crew that worked to install the new pipes downtown will move to Livermore and North College streets adjacent to Antioch College, to complete the third section of the loop. The crew will replace the old pipe that currently runs from the corner of North College and Livermore straight through the campus across Corry Street to the bike path.

And concurrently, two other GM crews will continue work on the loop section that runs from the Gaunt Park water tower through the park to Herman Street, then down Herman Street to Livermore.

The loop completion project, which has been planned for several years, will cost about $800,000 altogether. The Village has procured a grant from the Ohio Public Works Commission, or OPWC, for $400,000 that will pay for 47 percent of the project and the remainder will come out of the general fund, Bates said, stating that former Interim Manager Kent Bristol successfully applied for the grant last year. Bates recently received permission from Council to apply for a loan for the balance of the project’s cost from the Ohio Water Development Authority, or OWDA. If the Village is granted the loan, the borrowed amount will be used to replenish the general fund, and proceeds from the 15 percent water fund rate increase of  last April, which adds $100,000 yearly to the water fund, will gradually pay off the loan.

While the contract with GM allows 120 days for the whole project, GM has indicated it would like to finish the loop completion project by the end of May, Bates said.

Also this summer, villagers will see construction downtown with a continuation of the streetscape project. Begun last year on the east side of Xenia Avenue, the project continues this year on the west side of the street from Corry to Glen streets. The work includes removing and replacing sidewalks, replacing current street lamps with the railroad style lamps currently on the east side of the street, and removing Callery pear trees — although the sycamore tree in front of Bonadies will likely remain, Bates said.