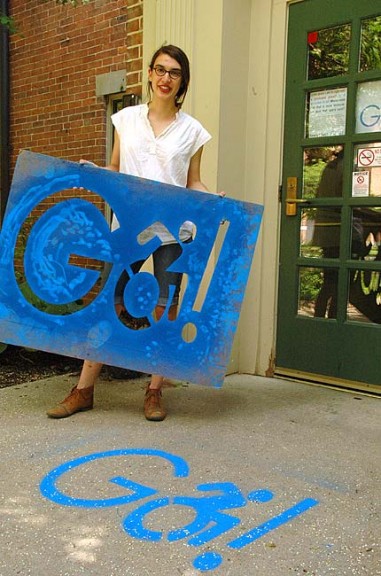 Paths of chalked blue dots appeared all over Antioch College campus on Friday, June 5, leading from easy-access front-door entrances to obscure back-door entrances to many of the buildings. Because many of the older buildings on campus do not go out of their way to be friendly to those with physical disabilities, for at least one day last week, campus community members were forced to go out of their way to empathize with those less physically able than they.

Student Cleo van der Veen’s “The Go! Accessibility Project” was conceived to give those who take their ambulation for granted a peek at how some get around campus without front-door access. By locking all the doors that were not accessible and leading people instead to the handicapped-accessible entries and exits, van der Veen invited the campus to see that simply because a building is compliant with the Americans with Disabilities Act standards, doesn’t mean it is “accessible” or friendly to those with physical impairments. Many of the ADA-compliant entrances are around the back of the buildings, in dark or obscure places near service doors and sometimes waste containers.

“A lot of people reported being late to class, meetings and appointments today!” van der Veen said near the end of the day Friday. “I’m really kind of excited about how much I’ve messed with people’s days.”

While most of the buildings on campus were built before the current ADA standards were established, even the newly renovated ones, such as North Hall, have problems with electric doors not opening long enough. The library, with a full flight of stairs to the front door and a dingy back entrance to the lift, is the worst of all, in van der Veen’s opinion.

“I love that library so much — you just kind of wish it was more accessible.”

“There hasn’t been a consciousness about it because it costs so much more to make it accessible,” she said. “But we have to remember that accessibility is something we have to start now. You can’t go back and do it later.”