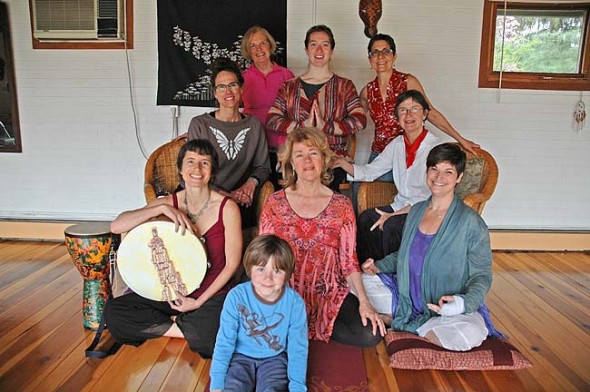 When one door closes, another door opens.

When Yoga Springs Studio closed its doors last summer with the impending opening of the Antioch College Wellness Center, some of its longtime yoga teachers — and their faithful students — were unsure where, and how, they would continue their practice.

A new door has opened in the Kula Cooperative, a collaborative of local yoga and movement teachers who say they are creating a “new model” based upon shared ownership, affordable rates and community-based practice.

Kula teachers said recently that the new organization is helping them support and inspire one another while their students nourish their bodies, minds and spirits on the path to wholeness.

Carmen Milano, who taught at Yoga Springs for eight years, said its closing brought much fear, despair and uncertainty, but ultimately it was a “springboard for a wonderful transformation.”

“Many of us were losing some of the opportunities we had teaching, so we started talking to each other to see how we could work together,” Milano explained.

As the engine behind getting Kula up and running in early 2015, Milano also came up with the name, a Sanskrit word meaning a community, or tribe, of like-minded people. Milano sees the wider local yoga community as part of the Kula tribe as well, since the new model is not about competition but collaboration. As explained by Amy Chavez, who teaches a women’s yoga class at the Kula: “Yoga means connection. It’s supposed to break down what separates us.”

Added Kim Krier, who teaches yoga to tween-age girls and will soon offer classes for those struggling with addiction and eating disorders as part of the Kula: “We’re trying to create something based less on a dichotomy or any kind of possessive, geographic-based competition. Our opportunities are boundless.”

Overall, Chavez said, the re-shuffling of the local yoga community has largely been positive.

“The landscape was changing and it created an opportunity for us to explore a new paradigm,” Chavez said.

Currently, all classes are at the Casa de Paz retreat space at 1315 Corry St., though teachers emphasized that the Kula will not be confined to a single location.

Marcia Sauer, who taught at Yoga Springs for five years, said that when Yoga Springs announced it would close there was a “feeling of doom” because of the interruption of classes that had been cultivated over many years, along with the loss of pay. She said she was grateful that Mindfully Well hosted some local yoga teachers in the fall while they looked for a more permanent arrangement. What they created in Kula was a business model that includes no debt, low overhead costs and shared decision-making, and it is already paying off, she said.

One new practitioner arising is Nicole Manieri, who is currently teaching a healing drum and song for women class at the Kula. While reluctant to join since she is not a yoga or dance teacher, Manieri said that Kula members encouraged her to share her gifts by putting on a class there. They also gave her important feedback on format and helped her advertise — often a daunting task for practitioners.

“It is a good incubation tank,” Manieri said of Kula. “It’s really helpful to have a collective of people putting on these creative group classes who can be a sounding board and a support system.”

Manieri added that the cooperative model of the Kula is one that “respects all the pieces,” including the practitioners, the hosts (Edwin Lainhart and Maria Calabrese, who own the Casa de Paz) and the administrators (Sandy Riorden, formerly of Yoga Springs, is a part-time administrator). Practitioners get the benefits of both autonomy and community, Manieri said.

“It’s a group of practitioners who are autonomous and sovereign in what they do but get the inspiration and support of community,” Manieri said.

Kula members said that the various yoga venues in town, including the Wellness Center, Mindfully Well, and independent studios, attract students interested in different kinds of practices. They believe there are more than enough students in Yellow Springs and beyond to support the wide variety of yoga and dance classes taught in town, evidenced by the fact that more than half of Kula’s students come from outside the village.

One focus of the Kula cooperative is on youth programming. The schedule features many regular classes for children. And this summer Becker, Sauer and Gaines will offer a variety of youth camps, including a yoga, dance and nature camp for incoming first-, second- and third-graders, a dance camp for high schoolers and a movement, song and art camp for 3- to 5-year-olds.

Becker sees her movement practices as related to the path of yoga because they both look at the health of the whole person and encourage physicality, creativity and community.

“It’s all about being in a good healthy place in your own body and in connection with other people,” Becker said.

Chavez added that yoga is more than stretching, and includes other practices of devotion and embodiment. Above all, the Kula Cooperative is more true to the “essence of yoga” than other business models out there, she said.

“This is much more integral to the original intension of what yoga is,” Chavez said. “Yoga is an exploration of the essence of who we are, and that takes love and support.”

For more information, contact the Kula at 937-554-1141 or kulacooperative@gmail.com.