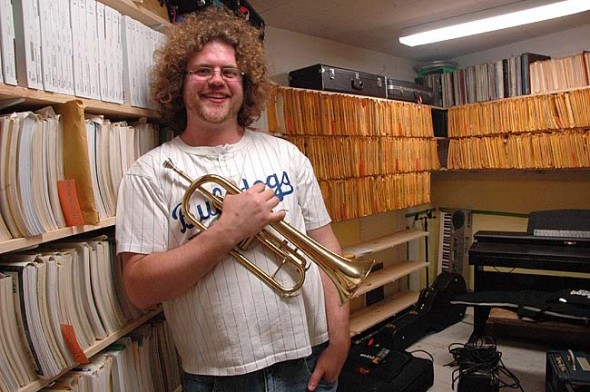 YSHS Band and orchestra director Brian Mayer used community resources to create a music library, searchable online, in one of the rooms in the “flying saucer” at the high school. It’s taken him two years, but thousands of band and orchestra scores and pieces can now be found on a database at Mayer’s staff page from the high school website. (Photo by Lauren Heaton)

YSHS music room is made harmonious

In order to organize and preserve its books and literary resources, Yellow Springs High School, like most schools, has a library to catalogue and lend its fiction and nonfiction holdings. Music, however has never had a place in the library. So for the past 50 years, the main resource for the school’s unusually rich band and orchestra program, its sheet music, has lived in piles and filing cabinets scattered about the four or five oddly shaped rooms of the music wing.

Current district band and orchestra teacher Brian Mayer spent his middle and high school years from 1997 to 2003 in that music wing, known as the “flying saucer.” But digging through the over 3,000 pieces of concert band, orchestral, choral, jazz band and solo and ensemble music to find the right parts was sometimes so challenging it just didn’t happen.

So for the past two years of his tenure as head of the McKinney/YSHS music department, Mayer has sorted and catalogued all the school’s music. He then built a searchable music library on Google Docs, which the department is able to share with not only students but anyone in the community with a desire to play moderate-level music.

The Yellow Springs Community Band, of which Mayer is a member, is one such group that could use the kind of music the school library holds. Other community members can access and view the library from Mayer’s school staff page at http://www.ysschools.org/YSHSStaffPages.aspx.

“This document has become a school resource for the students to find other music by their favorite composers or arrangers,” Mayer wrote in a release last week. The library is also “a shared resource for the Yellow Springs Community band who shares and often buys and donates music to the YSHS music Library.”

Along with the digital catalogue, the community has helped support the physical upgrade of the music library with about $800 from the Yellow Springs Music Boosters. In order to store the music he catalogued, Mayer and booster volunteers, replaced the filing cabinets with open shelving in what was formerly the director’s office. The music is visibly labelled and grouped by type, including about 1,000 concert band pieces, approximately 600 string and 800 full orchestra pieces, 300 choir pieces, 150 pep/jazz band pieces, and around 250 solo/ensemble works, and can easily be accessed by both students and visitors.

“Each piece of music is now stored in a file box with a label on the edge so that searching for music is more like browsing for a book in the library,” Mayer wrote.

Reorganizing the physical space created more room for student instrument storage (and a new violin and viola rack Mayer and his father, Jim Mayer, built), as well as more practice rooms and space for private lessons.

The band and orchestra programs held their spring concerts in early May, with works for ensembles from beginning to advanced levels, as well as an all-district band (fifth- through 12th-grade students) performance of “Smoke on the Water,” and over 90 string players performing the dark, beating of the “Gargoyles.”

And Mayer plans to keep the music department active over the summer with the 52nd season of Summer Strings and Band, sponsored by the Yellow Springs Youth Orchestra Association from July 6 through 17. For more information go to Mayer’s staff page and click on Summer Music Camps. For those looking to push their skills with private lessons or start a new instrument, Mayer will teach on selected Tuesdays throughout the summer, the schedule for which can be found on the same staff page. To register for a lesson time, email Mayer at bmayer@ysschools.org.

The new library will make all the programs the music department manages through the year easier and possibly more prolific.

“It will directly impact the students’ ability to have access to music and ‘Voice and Choice’ in planning future musical events,” Mayer wrote in an email last week. “This is a part of the curriculum that I care a great deal about — having music students personally identify with, as well as the music selections we do each concert cycle that help get and keep them interested in standard literature.”