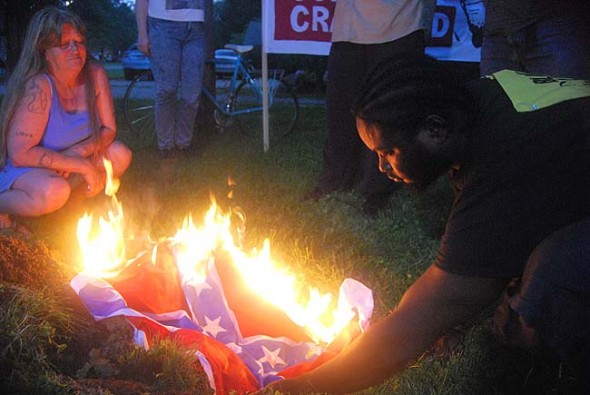 As thousands attended last Saturday’s 4th of July fireworks at Gaunt Park, about 30 members of the Greene County Black Lives Matter group burned a Confederate flag in protest of recent church burnings, the Charleston massacre of nine African Americans, and the police shooting last year of John Crawford in the Beavercreek Walmart. Shown above is group member Talis Gage. (Photo by Aaron Zaremsky)

As American flags waved all around town on Saturday, July 4, one Confederate flag, a former symbol of the American South, burned as a reminder of the lack of freedom many black citizens have suffered since the Civil War and before, even going back to the nation’s own independence day.

The Confederate flag burning took place at 9 p.m. in the driveway of a home on West South College Street, across from Gaunt Park, where the village’s July 4 fireworks were launched. Amid the patriotic sounds of the community band in the distance, about 30 people attended the Greene County Black Lives Matter burning ceremony — a continuation of the group’s nearly year-long demonstrations for justice for John Crawford, the black man shot by police at Beavercreek Walmart last year, and in protest of the more recent murder of nine people in a black church in South Carolina and subsequent church burnings in various parts of the country.

Local resident Bomani Moyenda opened the event as a “culmination” of the atrocities perpetrated by those who use the Confederate flag to justify and represent their acts of terrorism. He read passages from escaped slave and abolitionist leader Frederick Douglass’ essay “The Meaning of July Fourth for the Negro,” which Douglass delivered in Rochester, N.Y. in 1852, well before slavery was abolished in the U.S. Local residents Julius Eason and Talis X also read passages and spoke about the meaning of the event to them.

Talis X said he hoped burning the “symbol of white supremacy,” as he called the Confederate flag, would let people know the “truth about the flag, the truth about Independence Day, the truth about the Fourth of July.” He encouraged participants to continue to fight for justice for Crawford and others.

The flag event was modeled after a conceptual art project to burn and bury Confederate flags in 13 mostly Southern states on Memorial Day earlier this year. That flag burning was organized by Sarasota artist and Antioch College graduate John Sims (’90) and Julian Chambliss, chairman of the Department of History and Africa and African-American Studies program at Rollins College in Florida. Sims is also known for a 2004 piece, “The Proper Way to Hang A Confederate Flag,” in which he tied the flag to a noose.

The flag that burned on Saturday was a screen printed mock flag created by local artist Migiwa Orimo.