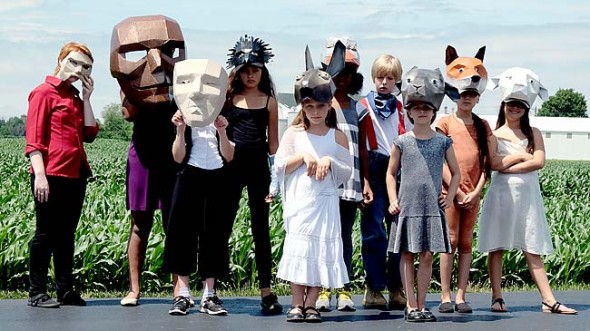 YSKP’s animals to save the farm

“Stop, children, what’s that sound? Everybody look what’s going down.”

But it’s actually about the “battle lines  drawn” in late ’90s Yellow Springs, where the forces of land development and farmland conservation squared off in a fight for the future of the 1,000-acre Whitehall Farm.

YSKP’s 21st original musical, “The Farm,” is inspired by the events of the Whitehall Farm auction and George Orwell’s “Animal Farm.” The play asks the question — can the wild animals, farm animals and human kids work together to save their beloved farm from developers?

Sponsored by a $10,000 award from the National Endowment for the Arts and grants from Ohio Arts Council “The Farm” relies on puppets, elaborate masks, full-size bulldozers and tractors made out of recycled materials to tell the story of a family struggling to decide the fate of their farm. The play was written by Joan Sand, a Minnesota librarian who founded the theater company that YSKP was based upon, and is directed by Ara Beal, YSKP’s managing artistic director.

The original Whitehall Farm story ended with the community raising more than $1 million in six weeks to purchase and preserve the farm at auction, including efforts from local youth who held bake sales and garage sales. While “The Farm” deals with themes similar to the historical event it is based on, there are certainly artistic divergences. Beal hopes the show helps local youth connect with local history and their sense of place while exploring a polarizing issue in a balanced way.

“We really tried to not make it black and white — development is evil and farms are good,” Beal explained. “One character talks about the importance of jobs and the local economy.”

New this year is a special “Art for All” performance on Friday, July 24, geared towards those on the autism spectrum. There will be special educators on site to help audience members navigate their experience along with fidget toys and calming centers. Inspired by Autism Theatre Initiative, the performance was sponsored in part by the Yellow Springs Human Relations Commission and is open to the public for a price of $5 per ticket. Beal said the performance will benefit both audience and cast members.

“This way we can bring in a new group of people who might not see live theater, and it helps the actors become more aware of that population and the struggles they have,” Beal said.

This year’s original YSKP show features more than 30 local children in addition to local and regional artists who created its sets, props, costumes, masks and puppets. Columbus visual artist Curtis Goldstein returns for his second year to craft set pieces from recycled materials. Pierre Nagley and Travis Hotaling will paint a mural backdrop on the amphitheater wall. And Ayn Wood will not only produce costumes, she also hand-built more than 20 geometrically stylized head pieces and puppets to create the anthropomorphized animal characters.

Typical of a YSKP show, the props are big and showy, which Beal said is driven by the demands of the performance space.

“We’re in an amphitheater where you don’t do small, quaint, living room theater,” Beal said. “The space demands big.”

Beal added that the animal characters and the use of masks and puppets will make the Whitehall story more dramatic. There are rabbits, foxes, goats, chickens, dogs, sheep, donkeys, horses and cows, among other four-legged creatures, along with three nature spirits.

“People standing by the side of the road with a save-the-farm sign is not dramatic,” Beal said. “Animals heavily involved gives it inherent theatricality.”

Beal took over as the local youth theater company’s managing artistic director last year when YSKP founder John Fleming stepped down after 20 years at the helm. While YSKP discontinued year-round classes and focuses mostly on a summer show, Beal is excited about the company’s future. The recent support from the National Endowment for the Arts is an indication of the company’s value, which Beal described as creating “successful adults for the next generation.”

“We’re creating the employees that you want to hire in the future,” Beal explained. “Now they know how to show up on time and prepare, accept criticism, deal with their mistakes, work collaboratively, all of the things you want in your workforce.”

In addition to the summer show, YSKP will also put on a winter show every other year. This year, the company is partnering with WYSO 91.3-FM to produce a podcast called “Zombie High School” along with other events in collaboration with the Yellow Springs schools, Beal said.

Maggie Knopp, 11, in her first YSKP show is still getting the theater lingo down, but has enjoyed learning how to use her puppet to create her character, she said. Myah Petri, 15, who plays a teenage girl in the show, said this year’s play is more modern and thus easier to work with than last summer’s 2,000-year-old myth. She continues to participate in YSKP because it’s fun and educational.

“I love meeting new people and I love watching the younger ones learn about theater,” Petri said.