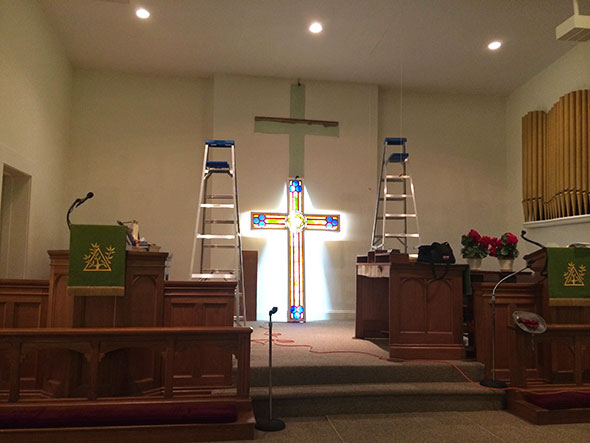 BLOG-And Then There Was Light

How many Methodists does it take to change a lightbulb? This question may seem like the lead-in to a joke but the Yellow Springs Methodist Church, 202 S Winter Street, tested its premise just last Saturday. For 35 years, a stained-glass cross has hovered above the altar in the church’s santuary. The fluorescent bulbs within the cross burned bright for decades. However, over the summer, my husband Jeremy noticed a problem whenever he opened up the church for Sunday Service. The right arm of the cross flickered…often long after its light had been turned on. As a member of the board of trustees, he brought up his concern at a monthly meeting. There, the other trustees agreed that the light bulb was near failure. They assigned a crew of three to attend to the matter. 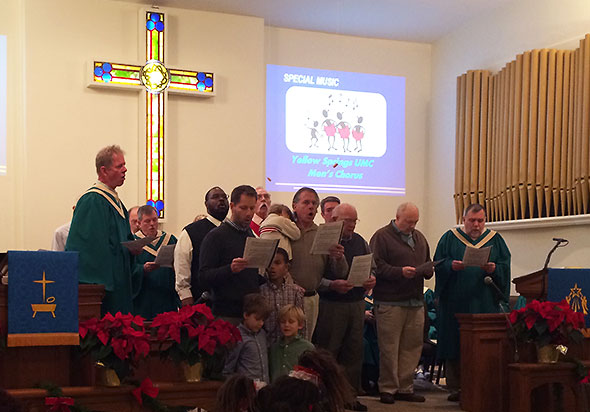 Part of the tasked crew, Jeremy met up with Rolf Metzger and Gary Blevins on a Tuesday afternoon. Their plan was to change the bulbs that day but God laughed at that. It took a full 90 minutes just to get the cross down off the wall. The original installers had somehow lodged a two by four into the wall so that two inches of the lumber’s four inch width formed a ledge. Two long wood screws held the cross perched on the narrow lip. After Jeremy and crew reverse-engineered the installation of the cross, they spent the bulk of remaining time planning the cross’s removal. The cross is a beautiful commemorative object but also several pounds of awkward hovering five feet off the floor. Dropping the structure of glass, metal, and wood any distance was not an acceptable outcome. When they were ready to brave the feat, two crew members walked up ladders placed to either side of the cross. One took out the wood screw from the horizontal arm on their side, then passed the power drill to the opposite side. Still perched high on a ladder, they held the first arm in place while their partner removed the second anchor and the third person below leaned against the base to prevent it from moving.

The three men balanced three spokes of the cross—right arm, left arm, and base—as they lifted the arms free from the two-inch perch. Once raised, they cleared the cross far enough from the wall to step down their ladders in unison still balancing the cross between them.

My husband took on the duty of managing the base. The cross was heavy, and he was sweating from effort by the time it touched down to the carpet. The unexpected intensity sent my husband to the adjacent church kitchen and refrigerator in the near desperate hope of finding refreshment. He found to his delight a can of regular Coke named Jessie in the refrigerator, solemnly swore to replace it in short order, and downed the drink. The hard part was over. When Jeremy returned to the sanctuary, he joined Gary and Rolf in setting the cross down carefully on its front. They marked the back panels Right, Left, Top, and Bottom, and removed the screws that held the panels to the back of the cross. Four sets of florescent fixtures lay underneath. The lightbulbs—at least the faulty ones on the arms—were simple to remove. However, the three trustees had other troubles. The florescent tubes had never been replaced before. Being almost 4 decades old, the fixtures had long become obsolete. No new florescent tube could fit the old fixture so the crew’s reengineering continued. For the moment, however, their work day came to end. Gary Blevins took the onus to replace the light fixtures, and the three men made a plan to reconvene Saturday afternoon and place the refreshed emblem back on its stately perch. 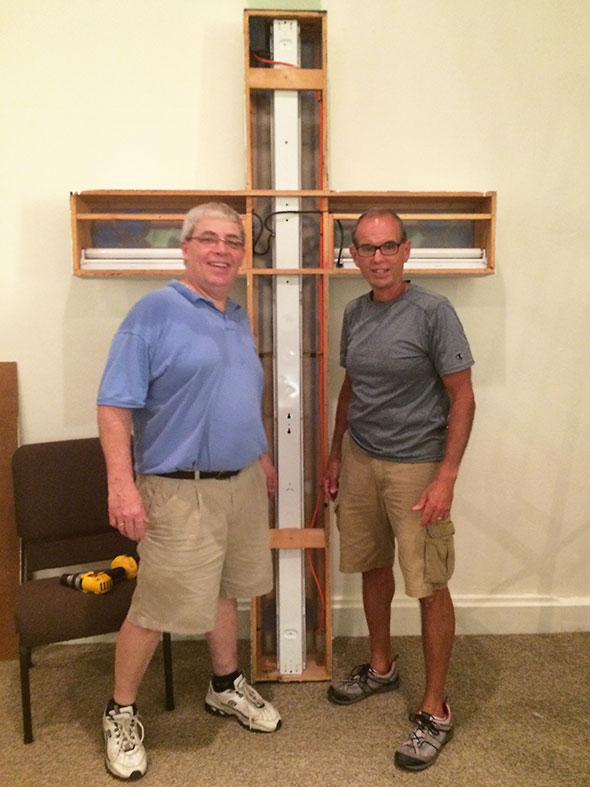 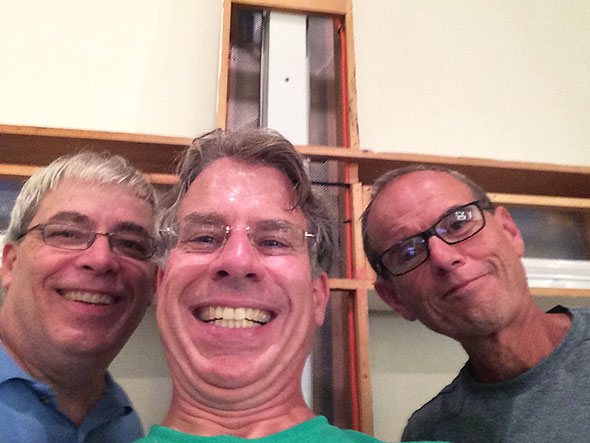 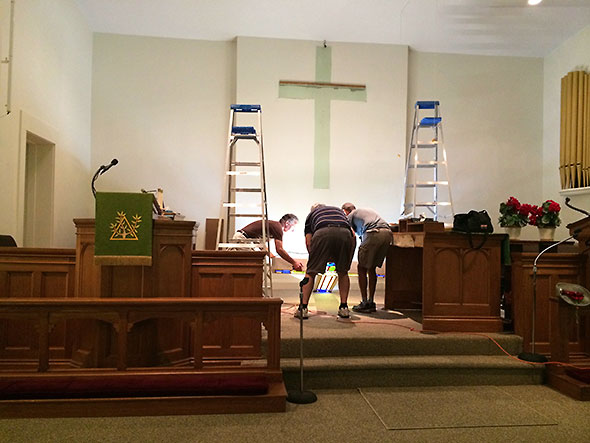 Before heading off their separate ways, the three paused. They recognized the rare event for what it was. As they pondered who might have placed the cross up high on the ledge in the first place, they took a moment to document who took it down. They arranged themselves in front of the cross from left to right in accordance to their assigned roles. Then, smiling broadly, they snapped a selfie. 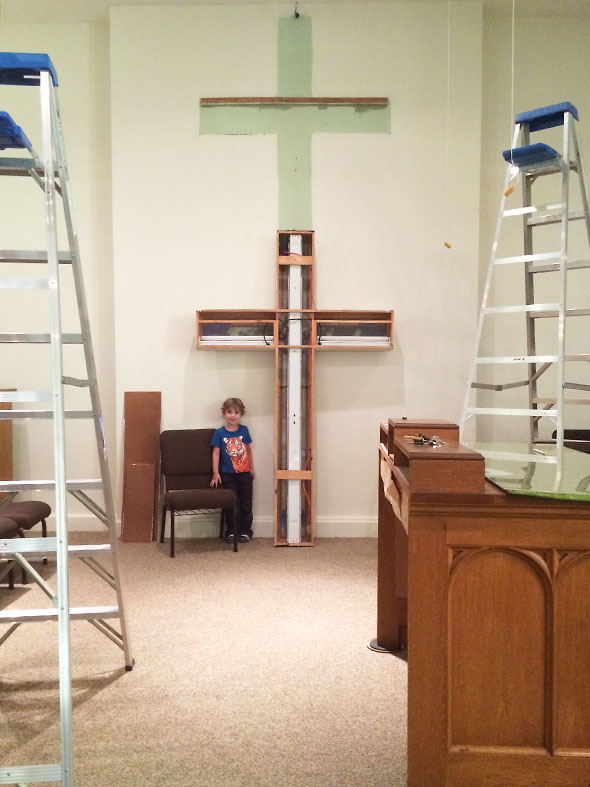 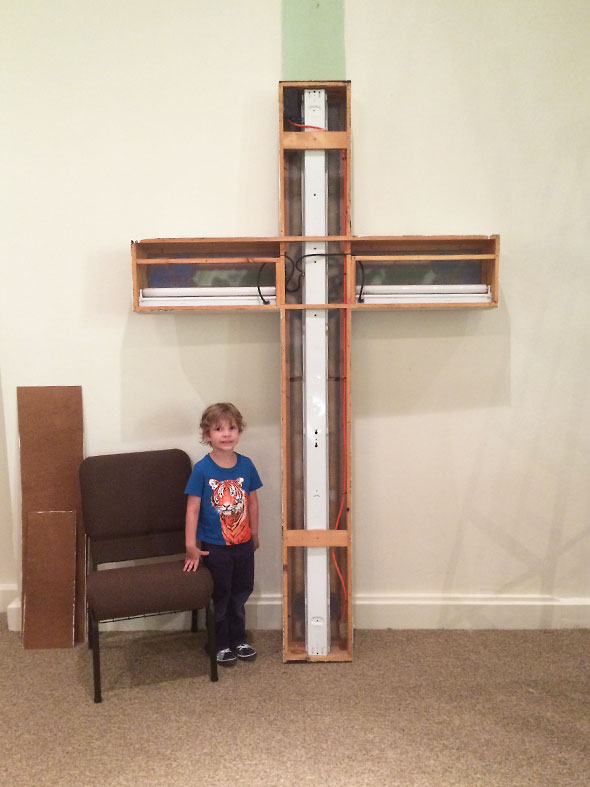 My husband returned less than two hours later with our son and a can of Coke named Pat. After dropping Pat off in the refrigerator, he showed our son the progress made that day: the two tall ladders still flanking the altar place, the altar pulled out and up near the steps, and the gray-green patch of unmatched paint that stood out from the wall, and the cross with its soft underbelly exposed. 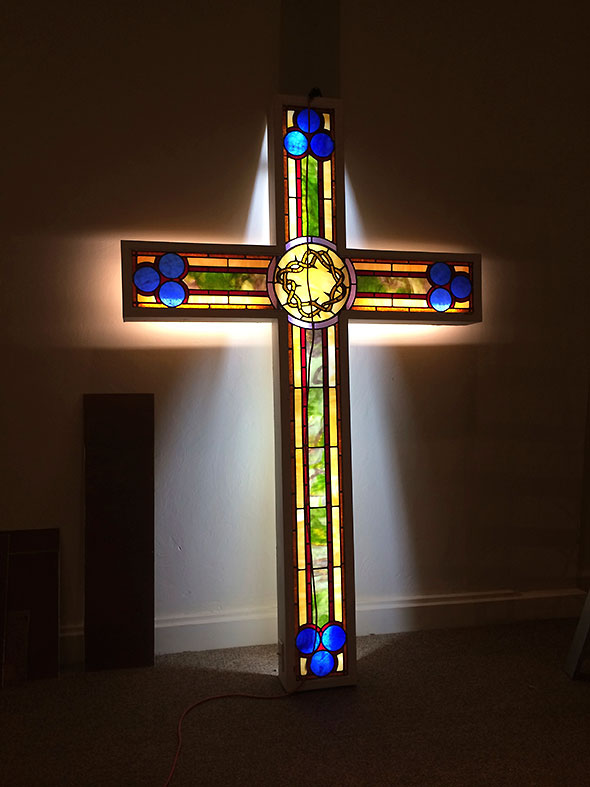 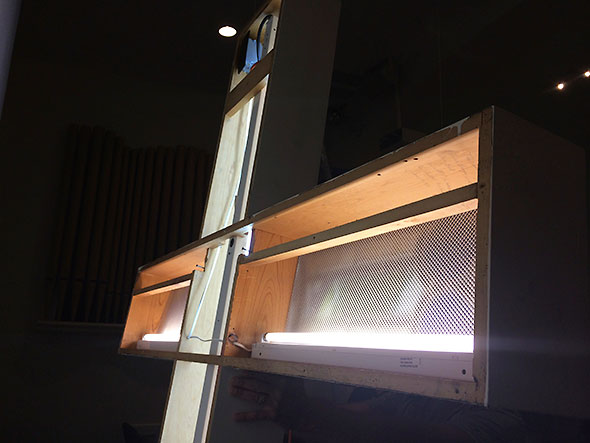 When the crew reconvened Saturday at the appointed hour, the children and I tagged along to watch the event. Gary Blevins had succeeded in his task to replace the antique fixtures with modern ones and was happy to report that the cross was much lighter after the rehab. He did however note an area of disappointment. The light bars along the arms did not illuminate their boxes evenly. The light cast brightly from the bottom but the reflected light at the top was dimmer. The horizontal bars were also noticeably dimmer than the vertical bar. In brief consultation, the men considered moving the light fixture or, alternatively, changing the horizontal bulbs for ones with a different color spectrum. I considered dropping in a comment about placing mirrors within the horizontal boxes when Gary Blevins spoke up with a much more practical alternative. He suggested covering the inside surface of the back panels with aluminum foil before we screwed them back into place. We placed the foil shiny side toward the stained glass so that it would mirror the light source and increase the strength of the reflected light within the box. The internal illumination would even out as a result. 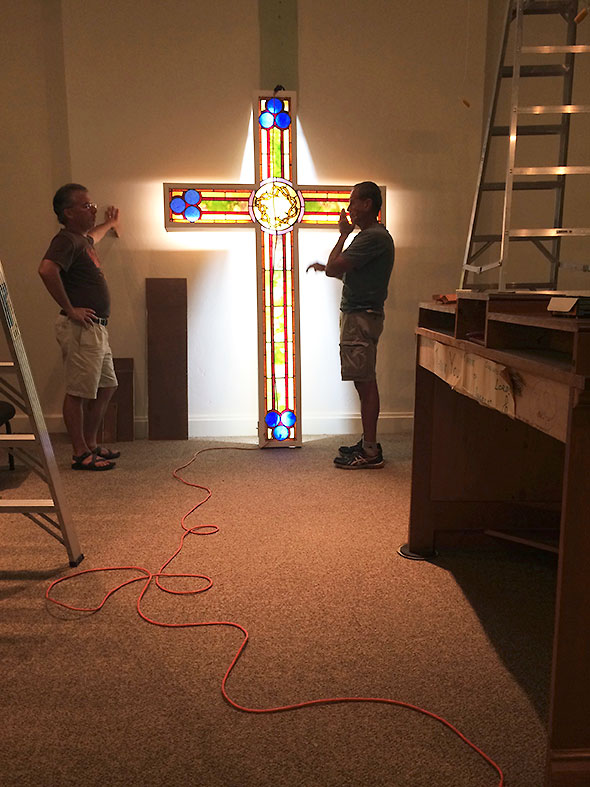 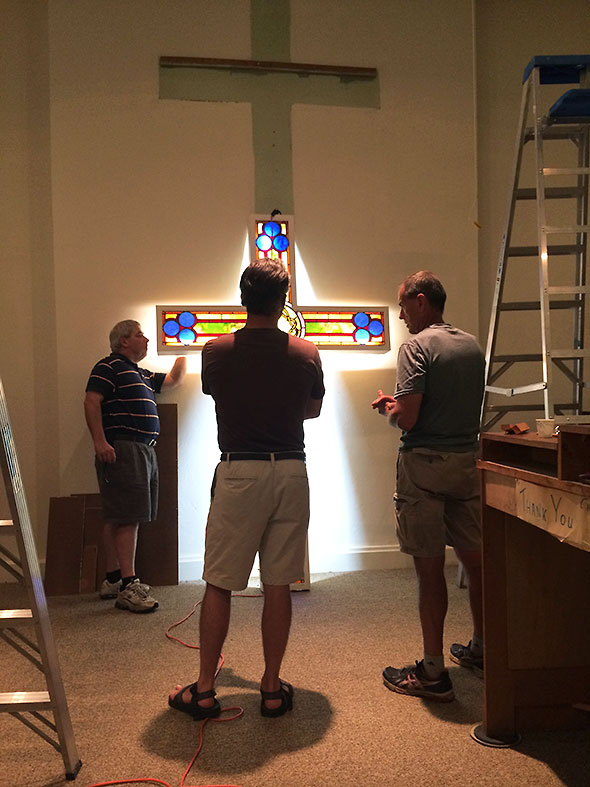 My son and I hopped forward to help…both of us simultaneously feeling in our element and that the project reached a juncture where it would benefit from our personal expertise. Blevins found a roll of aluminum foil in one of the church kitchens and ripped a couple of sheets off as the rest of us assembled the back panels according to their original positions: top, bottom, left, and right. We slipped the foil pieces underneath the panels for the arms, fastened all the panels into place, and then cut away the salvage aluminum foil. My son turned the men away from this duty as soon as the scissors came out. He knew he had this part. Together, he and I cut the overlapping foil away. We noted that the right and left back panels left a gap where the arms would rest on the ledge high above us. So, we cut the foil so that it overlapped the gap by a little and then tucked the salvage into the box at an angle. Tucked in, the reflective foil would cover the wood ledge without tearing as we fit the cross onto its perch. 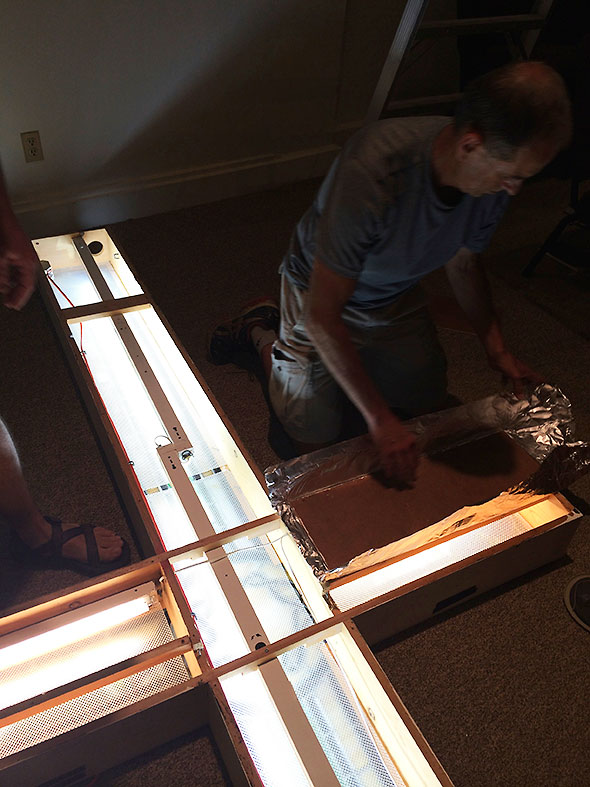 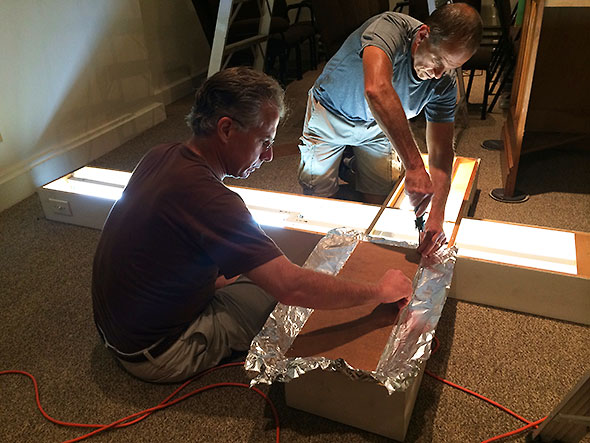 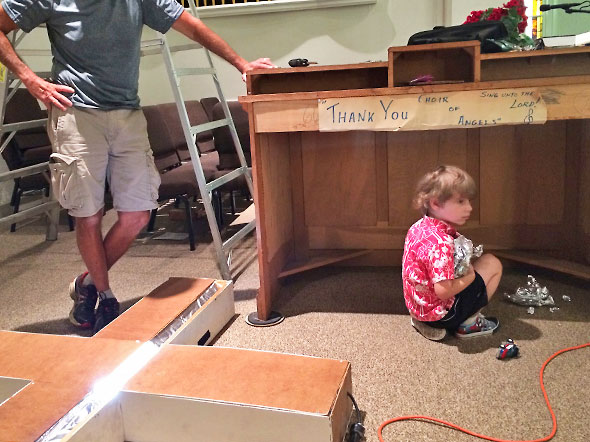 At this time, various church members began dropping by. They had come to do the prep work for last Saturday’s church barbecue. After delivering pies to the kitchen below, several stepped into the sanctuary to see our handiwork. I spoke to a person or two before my son came over to reel me back on task. He told me he was going to help Daddy ,and my job was to take pictures. Tipping up the cross back up against the wall, the four men considered the cross with satisfaction, all agreeing that the tin foil had succeeded in its purpose. As the older men negotiated their next moves, our son assigned himself the job of picking up, hauling scraps of foil and lose paper to the waste paper basket at the rear of the sanctuary. He helped the men reposition the ladders then, when asked, he stood back as Metzger and Blevins worked their way up their respective ladders. 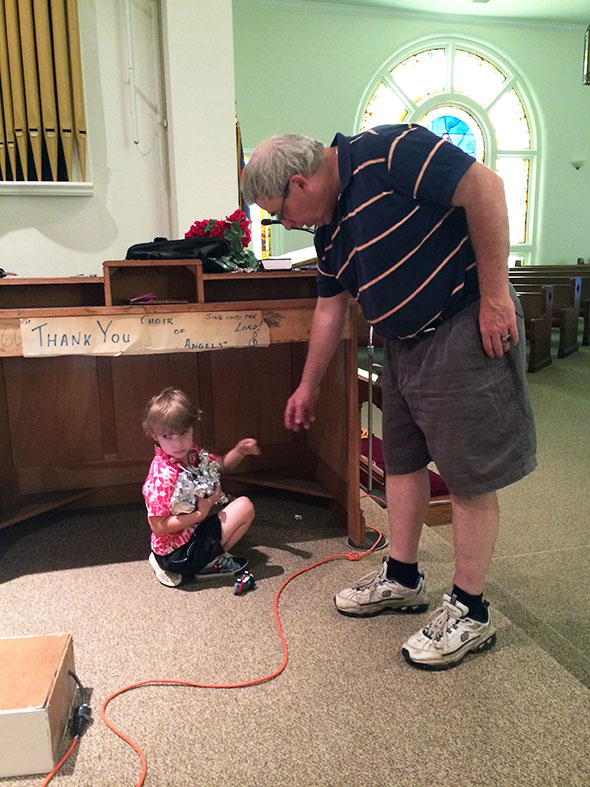 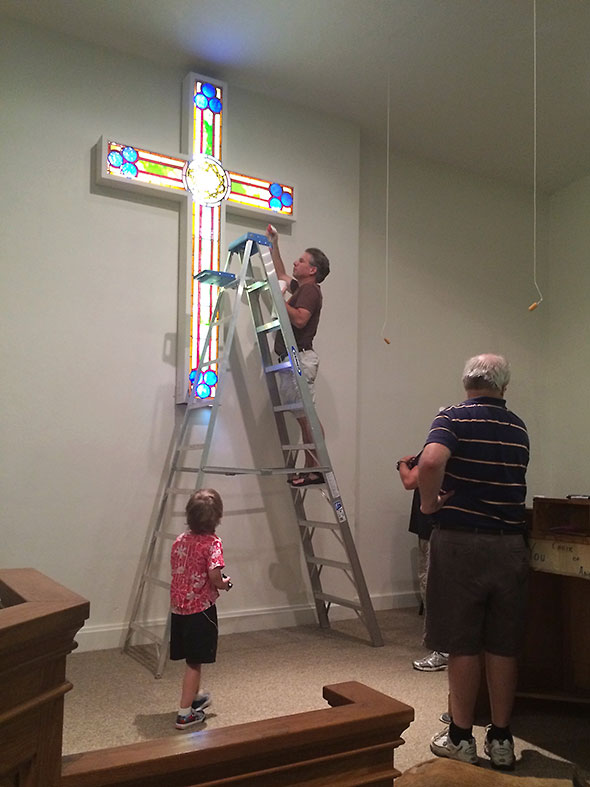 The cross was a great deal lighter which eased its upward trajectory. However, the work done in changing its fixtures had warped the wooden frame slightly. The warping was imperceptible to us all until we placed the cross on its high perch. I held one of the ladders steady as the men shimmied the cross along the wall looking for a best fit. In its final position, the right arm of the cross fit snug against the wall. Metzger fixed it in place with a single wood screw. The left arm, however, separated from the wall slightly so Blivens inserted a couple more screws on the left side to hold the cross securely aloft. 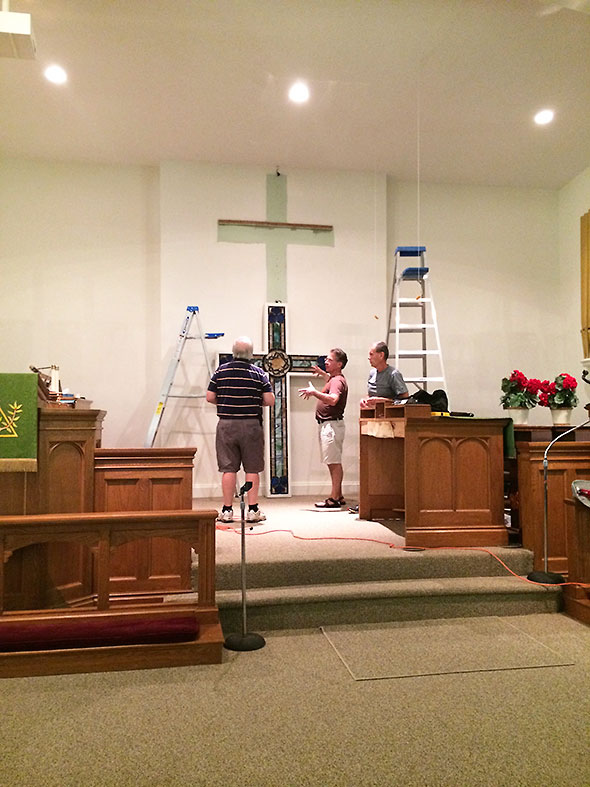 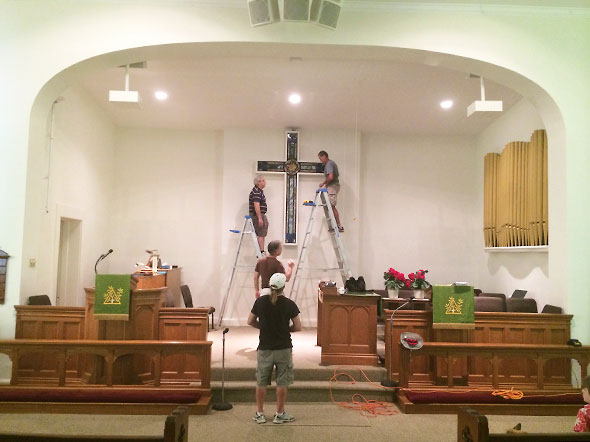 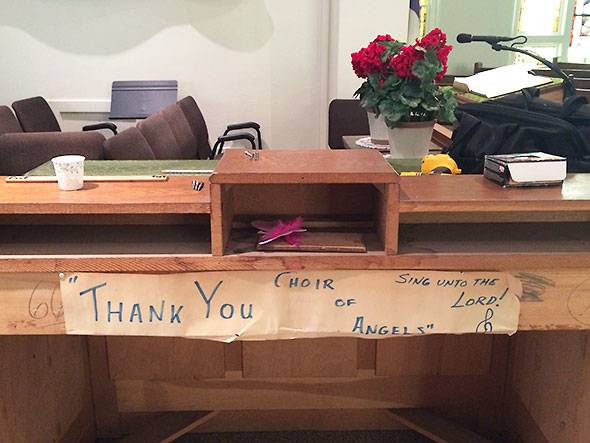 The two men descended and Jeremy took their place wiping down one side of the cross and then the other while his son danced around the base of the ladders. Blevins wrote a note which he attached to the left arm describing their ministrations and recommendations to posterity. 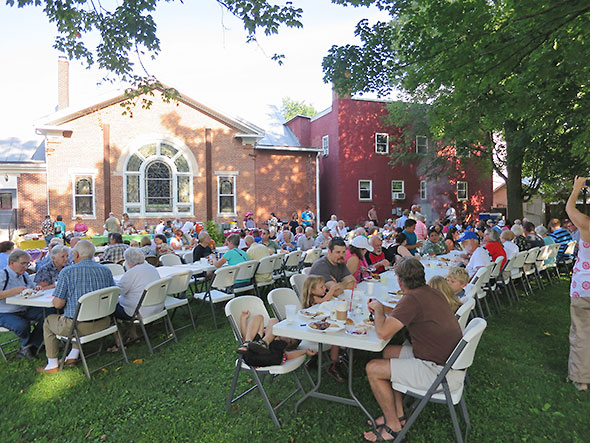 Outside, preparations for the Saturday night barbecue were well underway. Church members—led by the Crawford family—were busy in the assembly and provisioning of the outside barbecue pit and dessert tables. We returned later that day to partake, ordering two chicken dinners and one vegetarian to split four ways. Many villagers were in attendance on the pleasant summer evening, and Jeremy delighted in retelling the week’s adventures with the stained-glass cross. He and our son took noticeable pride in their contributions to the fulfilling day. When the evening rolled to a close, our son inserted himself in the fray again asserting himself into wrangling peers, tables, and chairs. 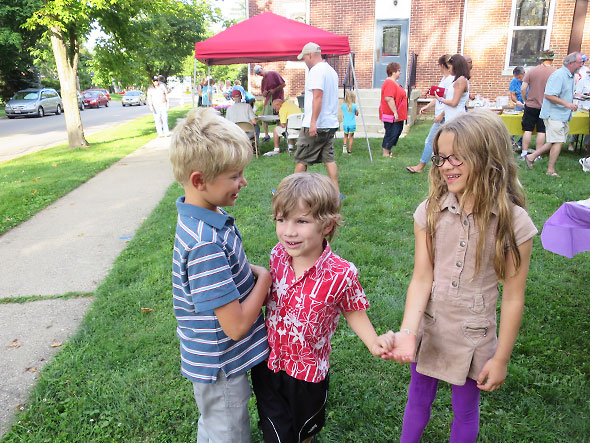 Now that our job is complete, we’ve concluded that the answer to our original question is five. Five methodists are needed to change a lightbulb. Let me also recommend our son to the next generation. Given his assertiveness, diligence, general assembly skills, and invaluable hands-on experience, you would do well to recruit him to lead the engineering team next go around.

Earlier in the week, I posted the question to Facebook after seeing the workcrew’s selfie: “How many Methodists does it take to change a light bulb?” My friend and fellow choir member Carol Cottom replied. To wit, she said: “As many as it takes, but they’ll have some food while they are about it and take an offering at the end.”

The answer to my question played out to its conclusion on Saturday and, don’t you know, Carol got it exactly right.

One Response to “BLOG-And Then There Was Light”