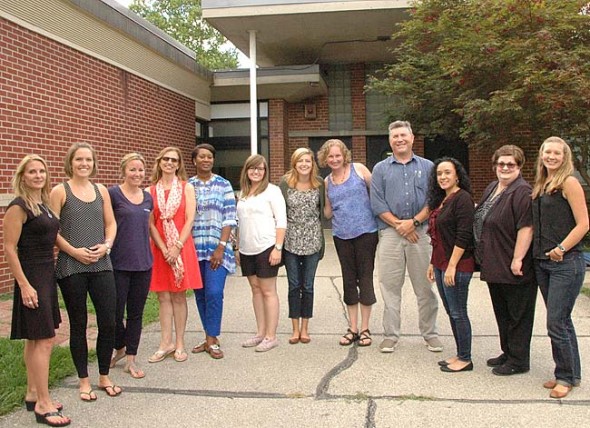 Each year brings fresh faces to Yellow Springs schools — and this year there are even more of them. The district has made 13 new teaching and administrative hires to-date for the 2015–16 school year, up from around five in a typical year, said Superintendent Mario Basora at last week’s school board meeting. Resignations, retirements and new or expanded positions were responsible for the increase.

Last week, new staff gathered at Mills Lawn for a two-day orientation led by science teacher Jack Hatert, serving again this year as McKinney Middle/Yellow Springs High School assistant to the principal. The News caught up with the new teachers and administrators late in an orientation day that began with a scavenger hunt in and around the village. Hours later, energy and enthusiasm still ran high.

Brief profiles follow below, and will continue in next week’s issue. Common themes in the interviews included teachers’ curiosity and excitement around project-based learning and eagerness to take students out into the community beyond the classroom.

Donna First
When First talks about special education, words like “inclusion” and “integration” pepper her speech. Hired to replace Barbara Greiwe as the district’s special education administrator, First is a veteran administrator and former school psychologist who most recently worked in the Cedar Cliff schools. “I wanted to be more involved as an administrator,” she said last week. “Yellow Springs gave me an opportunity to do that.”

Between 14–15 percent of students receive special education services in the district, First said, but that group is not set apart.

In researching the position, PBL caught her attention. “I was exceedingly curious about it,” she said. She attributes the “invigorated” environment she’s encountered here partly to PBL’s hands-on approach to teaching and learning.

First will also administer the pre-school program, operated by Greene County Educational Service Center and located at the Friends Care Center. The program serves children with and without developmental delays. Other administrative duties round out her position to full-time.

Last week, her office at Mills Lawn was still stacked with boxes, but already she had a poster up on the wall. Spiderman was poised to leap into the new space, much like First seemed to be.

“I love superheroes,” she said.

Lynne Wooten-Mitchell
A veteran school counselor with 20 years of experience in education, Wooten-Mitchell has worked in schools in South Carolina, Virginia and now — following her military family’s move to Ohio — Yellow Springs. Hired as a school counselor for McKinney Middle/Yellow Springs High School, she is excited about the year ahead, but also determined to take her time to observe and learn more about the students and school climate.
“I’m not going to reinvent the wheel,” she said. “I want to see what the key issues and resources are first.”

Wooten-Mitchell’s early impressions of the school community have been strongly positive. “You can tell even in a short visit that the educators are excited to allow students to be creative — to be, as our motto says, ‘Fearless Thinkers.’”

Yellow Springs is a “unique community” in being “very student-centered,” she added. She was struck in particular by how engaged students were by learning.

“It’s just exciting to work in an environment like this.”

“We think she has a gift for kids,” he said. Eastman will be teaching science at McKinney Middle.

Originally from California, Eastman moved to Yellow Springs in 2011. She’s worked at both Mills Lawn and the Children’s Center, so she’s “quite familiar” with Yellow Springs students, some of whom will soon be in her classes at McKinney.

“I love science, and I’m really excited to be working in the community where I live,” she said.
A camping and backpacking enthusiast, Eastman is passionate about connecting kids and nature.

“Children need to be outside,” she said. Noting that Yellow Springs offers “so many opportunities to get out into nature and the community,” she believes project-based learning provides the right context for sparking students’ fascination with the natural world, and engaging them in useful work exploring and protecting its treasures.

Though her curriculum is not yet set, she is excited about the possibility of guiding students in testing water quality in the Glen and near the school.

Ettamarie Valdez
Valdez’s passion is “helping people succeed.” She’ll be putting that passion to good use this year at McKinney as a study support aide, a newly created position.

“I’ll be helping children with PBL projects, other group projects and homework,” she said. “Basically, whatever they need support on.”

Valdez graduated from YSHS and has three children who go to school in the district. She also lives in the village. Being so deeply connected to the community makes her happy to find ways to “give back.”

She just graduated from Wright State, and is headed back to school for a master’s in applied behavioral science, which, she explained, is largely about — once again — “helping people succeed.”

Jodi Black
Vocational exploration should begin early, Black believes, because students benefit from learning first-hand what they enjoy and are good at. So it’s fitting that the role of sustainable agriculture and career exploration instructor, which she’s stepping into this year, has expanded beyond YSHS to include students at McKinney.

Black brings substantial experience as an extension educator and FFA advisor to her new job. “Agricultural education has been my career,” she said. Introducing her at last Thursday’s board meeting, principal Tim Krier said she had the “right disposition” for the challenge of connecting kids to vocational learning and opportunities.

She is happy about the role’s emphasis on sustainable agriculture.

“This is a nice, caring community that’s extra-conscious about the environment, what we eat and how those two things connect.”

Kate Lohmeyer
The new health and physical education teacher at McKinney/YSHS applied on something of a “whim” upon hearing about the job on social media, but became deeply excited about its possibilities.

“In interviewing with Mario [Basora], I quickly realized I was talking to someone as passionate and excited about educating the whole child as I was,” Lohmeyer said. “I could see this was a district that really valued the health and wellness piece of education.”

Knowing there had been “rift and loss in the department” added to her interest. “I had the feeling of being needed here,” she said. Lohmeyer was referring to the controversy around the 2014 decision to nonrenew the contract of former McKinney Middle physical education teacher Angela Bussey.

Lohmeyer has taught physical education for 11 years, seven of them in Huber Heights city schools. She’s also coached soccer for many years. She views athletic participation as a key confidence builder for girls, and is “always aware” that, as a female athlete, she’s a role model for girls and boys alike.

Lohmeyer looks forward to tapping “all the resources Yellow Springs has to offer,” including the bike path, parks and collaborations with local community organizations. She sees PBL as offering “great opportunities to incorporate health and wellness” into the curriculum.

“In a more traditional school, PE is labeled as an area that stands apart from the regular curriculum,” she said. “Here, I sense that all the subject areas work together.”