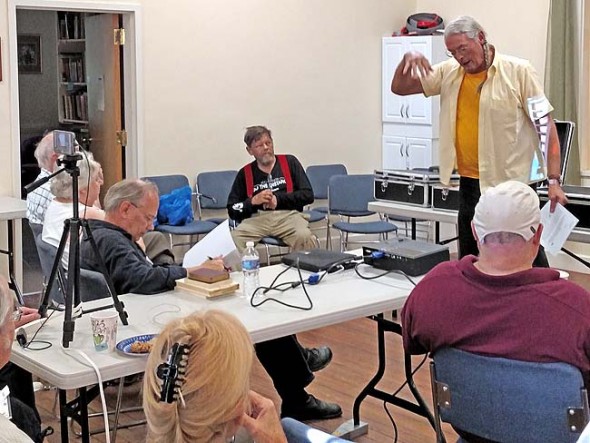 Wisdom Quest meets monthly at the Unitarian Fellowship to discuss astral travel, orgone, UFOs, and a wide variety of topics. Shown above are group organizer Bruce Forrester, standing, and last week’s speaker, Darrell Brann, who spoke on Archons, a nonphysical race who some believe threaten humans. (Photo by Dylan Taylor-Lehman)

The mystical salon of Wisdom Quest

Astral travel, Bedini generators, and UFOs powered by the life force of the universe: topics like these may seem obscure to casual readers, but they are familiar to the members of Wisdom Quest, the scenic stops of an excursion to the far reaches of the self and the many dimensions of the universe.

“There’s a big shift underway. Something’s up and we’re like surfers about to catch a big wave. We’re only pilgrims on the journey,” said Bruce M. Forrester, Jr., the group’s organizer.

Wisdom Quest meets once a month at the Unitarian Universalist Fellowship meetinghouse outside of Yellow Springs to discuss everything from higher planes of spirituality to healing devices “not approved by the FDA.” Tables with snacks and coffee encourage conversation. The exchange of ideas inspires a friendly atmosphere. Forrester said he tries to have a different speaker every month to promote dialogue and exploration.

A fellow pilgrim on the journey is New York’s Darrell Brann, who presented at last Thursday’s meeting. Brann opened his talk with an image of the Eye of Horus and explained that the Egyptian glyph is a representation of the limbic system of the brain. The pineal gland is actually the third eye, he said, and a fully unlocked pineal gland is a powerful weapon against the malignant influence of Archons, a non-physical race who are the nemesis of humanity.

“The Archons feed on our fear. They’ve infected the leaders and created all the religion shtick to keep us spiritually distorted,” Brann said. “They can take the form of an energy field and demons and have attacked me as a virus. They also take the form of reptilians.”

“Wait a second,” Jim in the audience interrupted. “Are they lizards or reptilian? Cause there’s a huge difference.”

“You’re right  —  reptilians are half man, half reptile,” Brann said. “Lizards look like seven-foot upright alligators. Sorry for the mix-up.”

The audience laughed, the confusion resolved. Other questions were freely asked and answered during the meeting, a mystical salon spanning a multitude of disciplines. Twenty people attended, and many assiduously took notes for the duration of the discussion. One attendee was so engaged by the talk that he met with Brann for a few hours the next day to discuss experiences and compare notes.

“I’m not a big expert on Archons myself,” Forrester said, “but I’m glad to share what he has to say.”

“Orgone is the chi of tai chi, the prana of yoga; like the Force from the Star Wars movies,” Forrester said.

The group is part of an “underground scientific community” dedicated to the study of orgone and its various applications, he said. Wisdom Quest takes it cues from the work of Austrian scientist Wilhelm Reich, a student of Freud who later dedicated himself to orgonomics. Reich found that he was able to channel the energy through homemade orgone accumulators, which he believed restore vitality, improve emotional health and can treat ailments ranging from fibromyalgia to sprained muscles to cancer by “infusing the system” with positive orgone energy.

Forrester himself used to make orgone-accumulating blankets and has published instructions on the group’s website.

“I’m officially a retired realtor but I’m still a mad scientist,” he said with a laugh.

More generally, though, Forrester said the group’s basic ethos resembles that of a late 19th-century movement called Lebensreform (“life reform”) that “propagated a back-to-nature lifestyle,” organic food, sexual liberation, and abstention from alcohol and vaccines. Wisdom Quest pamphlets given out at the meeting offer advice on clean eating; others discuss the benefits of sunbathing nude.

“Any kind of healing involves nutrition and food,” he said. “In fact, our upcoming speakers have less to do with lizards and more to do with healing. In November we have Joy Wallen speaking, who has an incredible, powerful voice that she uses to shake up your biofield. She’ll dowse you and sing missing frequencies back to your body.”

Heather from Fairborn, who was in attendance on Thursday, said she had been to “three or four” Wisdom Quest meetings before. She wasn’t sure what she thought of the evening’s program, but she writes everything down — to go over later. “There are lots of things like this going on in the area. I’m willing to check them out and see what fits for me. It’s really interesting to hear other people’s perspectives.”

One attendee, who said he is 75 years old and has been coming to the meetings “for a few years,” said that irrespective of the group’s various pursuits, Wisdom Quest “is a general life philosophy, an anti-war philosophy. We promote peace, even if it’s not overt.”