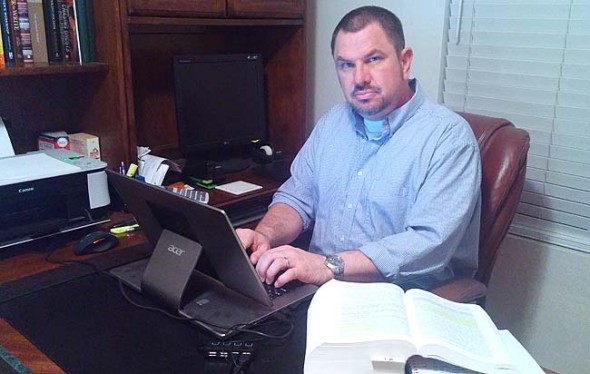 Michael Burns is finishing his undergraduate degree in creative writing through Antioch University Connected from his home near Phoenix, Ariz., Burns was drawn to Antioch for its legacy of social justice. (Submitted Photo)

First there was Antioch College. Then came Antioch University and its satellite campuses. Now AU Connected has joined the Antioch universe.

AU Connected (online.antioch.edu), initiated this past school year, is based entirely online. Primarily a bachelor’s degree completion program, it also offers a master’s degree in clinical mental health counseling. While Antioch University has for some time offered distance-learning options among its programs, they featured residency periods during which students came to the five AU campuses, including the Midwest campus in Yellow Springs, for periodic one-week stays. AU Connected eliminates the week-long stays.

“It’s an exciting way to expand the opportunity for people around the world to experience Antioch,” said Felice Nudelman, chancellor of Antioch University. The program “lets us live our mission and pedagogy and do it online.”

She said core university faculty, including Midwest’s Joseph Cronin, helped design the program, adding that it is “not the typical online experience.” Communication and community building are key components, she said.

“AU Connected is a community of learners. Faculty and students are a true community of learners,” connecting through emails, live chats, streaming and old-fashioned phone calls. “What we’re finding is that online there is more interaction and more time together than in a regular class.”

That’s been the experience for Michael Burns, who lives in a suburb of Phoenix, Ariz. “I’m finding that interactions between students is greater than in a traditional brick-and-mortar environment,” said Burns, who attended a traditional community college before “the money pulled me away” into financial publishing 17 years ago.

But when the devastating effects of the Great Recession on the financial industry put his employer out of business, Burns returned to his first career interest: creative writing. He has been writing since he was 6 years old and completing his bachelor’s degree in writing is his focus with AU Connected.

As a full-time student, Burns takes two classes at a time in seven-and-a-half-week blocks, half the length of a full semester. He said he’s generally required to log in a minimum of four hours a week for discussion forums, and the online “discussions have to be formative, they can’t be superficial.”

With two young sons, ages 6 and 10, living with him and his wife, and a 17-year-old daughter who lives with his first wife, Burns said that the flexibility of the program is vital for him.

AU Connected’s flexibility is also important to Andrea Dauser, who lives in Winston-Salem, N.C. “I moved during a class,” cross-country, from Chicago to Winston-Salem, she said.

While her own location could change, she said faculty members “are always super accessible and willing to talk.”

Dauser started her undergraduate career in the mid-’90s at Antioch College, but said she left in her junior year after experiencing some health issues as well as the death of her father. She eventually got a business degree from a school in Grand Rapids, Mich., but says: “I wanted Antioch on my résumé.”

“I’d been scoping out Antioch University and its long-distance program for awhile,” she said. The AU Connected format appeared to suit her needs. “The online platform has so many capabilities,” she said, adding that she finds she can dig in deeper and take the time she wants to grapple with information and ideas that might pass by too quickly in a traditional classroom.

Still, she was skeptical about the community aspect of the experience. “I had done online before with the business school. I want to know my teachers. I want to know the other students. I really quizzed Joe [Cronin, her advisor].”

She said she has found the accessibility of staff, faculty and students supportive and personal. “Dr. Cronin has promised to meet me for coffee any time.”

The cost is also right, she said. Tuition for AU Connected’s undergrad programs is $250 per semester credit hour. Undergraduate programs at Midwest are listed at $527 per semester credit hour. Chancellor Nudelman said that Burns and Dauser are among about 100 students currently enrolled from around the world, including one student in Kabul, Afghanistan. Instructors are drawn from Antioch University faculty as well as local adjuncts, who are paid according to enrollment. One instructor reported making $75 per student for her instructional time.

Cronin, the program’s faculty coordinator, said that the undergraduate faculty is made up mostly of adjuncts who are already affiliated or have taught at the Midwest campus.

AU Connected’s master’s in Clinical Mental Health Counseling came out of a program already in place at the New England campus, and is overseen by faculty there, Cronin said. That curriculum includes some face-to-face visits, and the costs are comparable to the university’s other master’s degree programs. Cronin said that the university is exploring the possibility of bringing the online model to other master’s programs as well.

Speaking as an undergraduate faculty member, Cronin said that online classes “can be a very engaging and interesting way of teaching.” He noted that discussions can become more extensive and involved than in a traditional classroom setting. “I can get 20 to 25 responses to a student’s initial posting.” Classroom discussions don’t usually lend themselves to that kind of response, he said.

The model also “requires a lot of engagement and instruction from the faculty,” Cronin said. “We want them to stay in close contact with the students.”

The university’s development of online curricula is part of a national trend that shows colleges and universities across the country embracing new technologies as a strategy for attracting and retaining students. According to a 2014 survey of institutions of higher learning, co-sponsored by the Online Learning Consortium, Pearson and Tyton Partners, the number of higher education students taking at least one distance education course in 2014 rose 3.7 percent from the previous year, following an annual increase over the past decade. The report also found that 74.1 percent of academic leaders rate the learning outcomes in online education as the same or superior to those in face-to-face settings and that 70.8 percent of chief academic leaders say that online learning is critical to their long-term strategy.

At the same time, however, only 28 percent of academic leaders say that their faculty accept the “value and legitimacy of online education,” the survey reported.

Cronin said that unfamiliarity with online methods and technology can make teaching difficult for some. But, he said, “it’s not that different” from classroom teaching. The main difference is that a faculty member’s “time is spread through the week differently.”

An indication of the program’s initial success is that “after running for a little over a year, [AU Connected] has an 85 percent retention rate. That’s 30 percent higher than the national average” for college students, Cronin said.

He added that he’s also been impressed with the caliber of students who have enrolled in the program so far. Three of his current students are former Antioch College students who have returned to school — online — to finish their degrees.

Chancellor Nudelman said that AU Connected students are attracted to the Antioch name and the ideals on which it was founded and are people who ask themselves: “How can I make the world a better place?”

Writing student Burns said the Antioch history and its affiliated Antioch Writers’ Workshop are what first drew him in. He said he had already been accepted to two other online programs when he came across information about AU Connected and was eager to learn more.

Now he said he is proud to be part of the Antioch system. “I see the college and the university as brothers.”