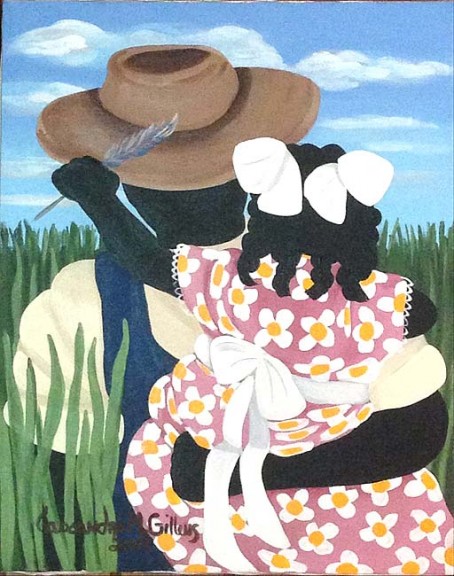 Painting by Cassandra Gillens from Jim and Betty Felder’s collection. Gillens is a self-taught artist from the Gullah community of South Carolina who has exhibited widely in the United States and overseas.

Betty and Jim Felder never set out to collect art. “We just bought things we liked and enjoyed,” Betty said. “And could afford!”

One early object was a piece of pottery from Italy, which Jim gave Betty on their first anniversary. “That’s very special to me, of course,” she said. Over the years, they acquired more works — painting, sculpture and pieces “I wouldn’t even know how to characterize,” Betty said. Some were from friends, some were from travels.

The couple visited Atlanta regularly for several years, and picked up pieces at the city’s Black Arts Festival. Jim is from South Carolina, and visits to his home state led them to explore the coast, where Gullah culture still thrives. The Gullah are descendants of slaves in the coastal areas and sea islands of South Carolina and Georgia who have preserved many elements of their African linguistic and cultural heritage. Soon Gullah artwork made its way into their home.

But they still didn’t consider the art they lived with and loved a “collection” until the Yellow Springs Arts Council approached them about participating in the Art House-Hop. “Once we began talking, we started thinking, ‘This is a collection.’ Now we view it that way ourselves,” said Betty.

Betty and Jim Felder’s collection is one of seven private art collections featured in this year’s Art House-Hop, held on Sat., Sept. 5, noon–5 p.m. Debuted three years ago by the Yellow Springs Arts Council, the event has become an annual fundraiser for the group, and a unique opportunity for villagers and guests from surrounding areas to view works they might otherwise never see. New collections are selected each year. All works are on display within their owners’ homes. Tickets for the self-guided tour are $15; children 12 and under are free.

“There are some incredible collections in this town,” said Nancy Mellon, YSAC gallery coordinator and Art House-Hop organizer for three years running. “Art collectors are a big part of the reason we’re an ‘art town.’” The event was created as a “celebration of collectors,” she added. “They’re part, a huge part, of the circle of art.”

Another collection on view this year is one many villagers will know — or think they know. The late Eddie Eckenrode, local bookseller and lifelong artist, left behind thousands of paintings and drawings when he died in May 2010. His wife, Sam Eckenrode, is working with curator Paige Diebold Babb, who grew up in Yellow Springs, to catalogue his work. She hopes to assemble Eddie’s “catalogue raisonné,” an art-world term for a comprehensive, annotated listing of all an artist’s known works that serves as a reference for scholars and collectors.

She believes the catalogue will contain between 2,000–3,000 entries when finished.

“He left me his body of work,” Sam said. “I have to make sure it gets into the right hands. My hope is that somebody will see it for what it is.” Between 100–200 pieces are already in public and private collections, she said.

Meanwhile, Art House-Hop guests will get to view a sampling, together with pieces from Eddie’s friends and fellow artists, on the walls and in the nooks of the home Sam shares with her mother, Bambi Williams.

The collection extends beyond pieces villagers might have seen at Sam and Eddie’s Open Books and the Eddie Eckenrode Gallery. It also shines a light on the seriousness of Eddie’s vocation as a painter.

“Many people knew Eddie as a local downtown bookseller who maybe painted on the side,” said Sam. “But in fact, he painted every day in his studio.”

Eddie first came to the area in 1963, to attend Dayton Art Institute. He left college in the mid-60s to move to New York City, where his milieu included Louise Nevelson, Mark Rothko, Adolph Gottlieb, Roy Lichtenstein, Lester Johnson, Bob Thompson and Red Grooms. Some of these artists, as well as key mentors from DAI such as painter Jay Milder, remained lifelong friends.

The time is right to open up Eddie’s legacy to villagers and others, Sam said. “This is the fifth anniversary of Eddie’s death,” she said. “We weren’t ready to do this until now.”

Eddie himself was never interested in organizing a retrospective of his work, she added. “His perspective was, ‘What I’m working on right now is what’s interesting,’” she said. “He wanted to keep looking ahead to what was next.”

In a sense, the collection on display this Saturday is (a piece of) the retrospective he resisted having. Eddie tended to work in series, and quite a few series are represented in the works hung around Sam’s home. Several paintings from one series, with the working title of “Tombs” (later abandoned), hang in her upstairs hall. Colorful, abstract and carefully patterned to vary yet interrelate, the 11 pieces (she has four, other collectors have the remaining seven) were created in response to Bach’s Goldberg Variations.
“They’re really a visual interpretation of the notes,” said Sam.

Early on, she said, Eddie abandoned canvas for wood lath, the wooden pieces that ordinarily make up the canvas frame.

“His frames started creeping into the canvas, and eventually he said, ‘Why paint on canvas?’” Eddie would paint individual strips of lath, then assemble them into paintings that double as wall sculpture, and mesmerize with depth and a sense of movement.

“He said part of the fun of it was not knowing what a painting looked like until he finished,” Sam explained.

Works on paper constitute another portion of the collection. These tend to feature human-like forms rendered in greens, browns, and reds, and often posed in strange or contorted ways. There’s a feeling of energy, intensity and sometimes suffering in these works.

“Eddie didn’t want to talk about his work,” or explain what it meant, Sam said. “He would quote [painter] Milton Avery who said, ‘Why talk when you can paint?’”

Still, there will be plenty of talking happening at the Art House-Hop. Tours of each collection are self-guided, but hosts will be on hand to answer questions and share stories about the art, artists and how works were acquired.

“Preparing [for the tour] has made me look at the pieces with a different eye,” said Betty Felder. In some cases, she’s been able to locate more information on individual works and artists. “It’s been an education for me.”

Talking about art, Mellon said, is part of the fun — for hosts and guests alike.

“People who’ve attended in the past have been bowled over by the friendliness of the collectors,” she said. “There’s such an ‘open-heart’ feel to the event.”

According to Betty, there is a reason for that openness.

“When you live with things, they’re part of you.” The intimacy of the Felders’ collection, which includes works by personal friends, Betty’s mother and Betty herself, was no deterrent to the couple’s willingness to open their home to the public. “We just wanted to do it.”

There’s only one thing Betty regrets. “We don’t get to see the other collections,” she said. “We would really like to take the tour ourselves.”

For details and to purchase tickets, visit ysartscouncil.org.