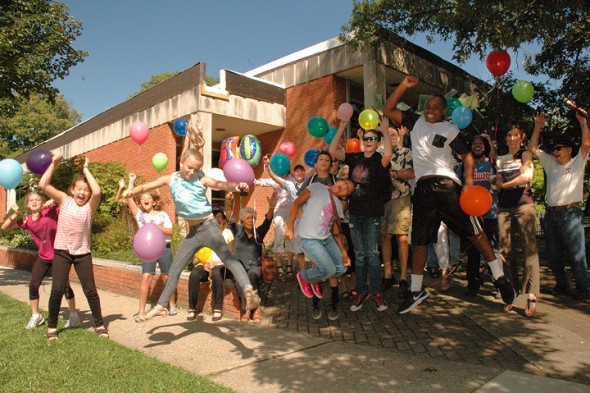 The Yellow Springs News of Sept. 1, 1965 reported that a “record crowd…a swarm of kids and parents” poured into the new Yellow Springs library, which opened at 2 p.m. on Aug. 30, 1965. The headline was ‘Dream Realized,’ and a new library wasn’t just the dream of librarians but the dream of the whole community.

Today, 50 years later, the dream is still as vivid as ever. The tens of thousands of books, along with numerous public programs and meeting rooms, have made the Yellow Springs Library the most popular branch of the Greene County Library System, said Connie Collett, the library’s head librarian.

“It’s a really busy community center. People meet up here on a daily basis. It’s not home, it’s not work — it’s a community place,” she said.

A day full of activities will celebrate the library’s golden anniversary. Starting at 11 a.m. this Saturday, Aug. 29, the library will host a birthday bash open to the public that will have something to offer all patrons.
There will be activities for kids the whole afternoon, Collett said. Booker T. Fox, the library’s mascot, will be there, and there will be crafts and balloon sculptures.

And for adults, a company called Tinkr Tech will demonstrate 3D printing. The library has put together displays of books and items from the 1960s, and a band called the Hoppers will perform ’60s music in the library’s parking lot alongside cars from the era.

“People who want a quiet study day at the library might be disappointed,” she laughed.

On a quieter note, the library will be recording histories of the genesis of its building, as told by people who were involved in its planning and fundraising. There will also be a reception for former staff and members of the Yellow Springs Library Association.

A legacy of community support
The library was built in the summer of 1965 with overwhelming support from the community. Village government bought the land and the public raised $50,000 to help construct the building. Volunteers helped transfer the library’s collection via truck brigade, with one group loading books, one group unloading, and another shuttling in between the old building and the new. The all-in effort is a characteristic of the town that has helped the library endure for the past 50 years, according to Collett.

“Yellow Springs is hugely supportive of the library, and the residents are such enthusiastic users of it,” she said. “Everybody from little kids who are story-time regulars, babies who are baby-time regulars, clear up to very elderly seniors. The variety of patrons makes it a very pleasant place to work.”

Gerry Simms, a Village Council member, volunteered for the library commission and saw firsthand the library’s connection to the village and its residents.

“It’s a mainstay in the village, a great asset to the community,” he said, which is why repairing the roof of the library was one of the Council’s top priorities this year.

In 1965, a new building was necessary to accommodate the library’s growing resources and the growth of the baby-boom generation, said Collett. The town went through a spate of building that year, constructing apartment complexes, senior housing, a water treatment plant, and a new gym at Antioch.

Some changes accompanied the opening of the new library. The library was open six more hours per week, books could be checked out for 28 instead of 14 days, and the library began using personal library cards, which made use of the library’s new “photographic charging system.” The library also implemented a rule favorable to its books but to the chagrin of young patrons: parents were asked to please tell their kids that “candy, popsicles, ice cream, cookies, cokes, milkshakes, etc.” were no longer allowed in the library.

Like the futuristic library card system the came with the new building, Collett said that the library’s resources have advanced with the times. She said there was “maybe one” computer at the library when she started in 1989.
“The computer was a thing set out for the public to go ‘Gee whiz!’ over,” she laughed, but soon afterward the card catalog was automated and a number of computers were added for public use. New outlets and datalines are ongoing technological additions.

The building itself, with its large windows and abundant light, is the subject of much admiration. Collett said that part of what has made her 26-year tenure at the Yellow Springs library so enjoyable is that her workplace is such a pleasant place to be. People tell her how beautiful the building is on a weekly basis, she said. Robert Porter, a member of the original building committee, said of the building in 1965, “I’m proud of it. It looks nice and it’s a real practical building.” Librarian Betsy Eckroad also recognized its practicality when the library opened. She commented on how quiet it was, “probably because of all carpeting and ceiling tile,” even though it was “bedlam all day long” on opening day.

It will likely be bedlam again for its birthday party next Saturday, an appropriate atmosphere for festivities being held almost 50 years to the day after the library opened. The party is a celebration of the library’s enduring role in the community and a way to kick off the library’s next half century.

For more information and a schedule of events, visit greenelibrary.info or stop by the branch to pick up a flyer.