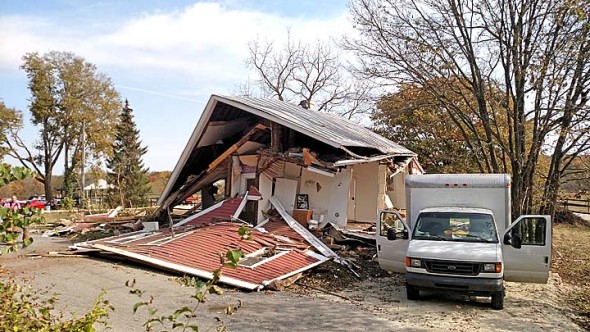 Looking east at the exploded house from the bike path.

At approximately 11:12 a.m. this morning, a home under renovation on the Riding Centre property was ripped apart by an explosion triggered by a propane gas leak in the basement. The most likely scenario was that the gas ignited when the furnace kicked on, according to Miami Township Fire Chief Colin Altman.

No injuries were reported on the property, which is owned by the Glen Helen Nature Preserve. A contractor working on the home had just stepped outside when the explosion occurred. No passersby or Riding Centre employees were hurt. A riding lesson was in progress at the time of the explosion, but the horse was not startled and the rider was not injured.

There was no fire following the explosion because the gas dissipated after the walls of the structure opened up, said Altman. The power and gas to the house have been turned off.

The house is located adjacent to the riding stable just off of East Hyde Road, part of which is closed until further notice. The bike path is presently closed from the covered bridge to the Riding Centre in both directions. The area is deemed as unsafe due to the unstable condition of what is left of the structure, and because of debris in the area.

The property had been under renovation for the past year. The property was going to be leased as a private residence as an additional revenue stream for Glen Helen and Antioch College. A lease was to be signed next week. Shahkar Strolger, the property manager at Glen Helen, said that the property’s insurance agent will be on the scene shortly to determine if the structure can be rebuilt or will have to be demolished.

Further details will be published in next week’s issue of the Yellow Springs News. 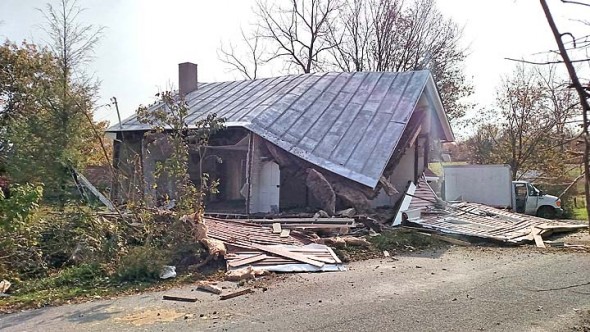 Looking south at the caved roof of the same house.