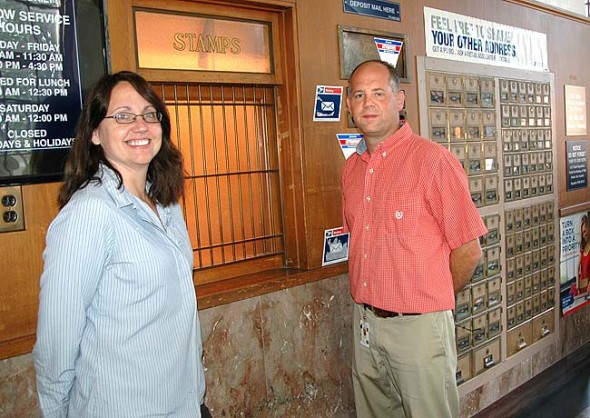 Postmaster glad to serve in village

The U.S. Postal Service has instituted a Sunday delivery of Amazon packages, even in Yellow Springs, according to Kenneth Hensley, the new postmaster of the local post office. Other than the most recent service expansion, the local office and its sister branch in Clifton are stable with no plans for change, Hensley said.

Leadership is what’s been in flux at the local office in recent years. When Dave Kennedy left in 2012 after almost six years as the local postmaster, the Yellow Springs office got Postmaster Dave Gourley for two years, before he was promoted to postmaster of Germantown. From April through July Tamla Bruton served as interim postmaster in Yellow Springs until Hensley stepped in on July 25.

Based on its volume and population served, Yellow Springs is a step 18 post office, the smallest of the full-time offices with designated pay scales that climb as high as level 25 before getting to the big city offices, according to David Van Allen, the Cincinnati regional spokesperson for USPS. But size doesn’t necessarily determine turnover in the postal service any more than personal preference, he said.

Indeed, Hensley has been trying to get to Yellow Springs ever since he came to Ohio in 2007. Hensley served as postmaster for Clayton, Cedarville, Spring Valley, Bellbrook and Alpha and was the officer in charge for offices in Xenia and Miamisburg before a post finally opened this year in Yellow Springs. He was interested in Yellow Springs because it is busy enough to have city delivery and it is about eight miles from his home and family in Pitchin, just south of Springfield. And he likes the community as well.

“I picked Yellow Springs because of the friendly community, and the employees here are very dedicated,” he said in an interview last week.

Hensley, 45, grew up in Arkansas and served six years in the Marine Corps, which sent him to the first Gulf War, Panama, Somalia and Bosnia between 1988 and 1994, before he came home to join the USPS. He started as a letter carrier and later clerk in Fort Smith and Paris, Ark., before being appointed postmaster of Uniontown, Ark. in 2000. Hensley also serves as a senior master sergeant in the Air National Guard and is now stationed at Rickenbacker ANG Base in Columbus, where he returns one weekend a month for routine training.

He chose the postal service because he believes in its mission.

“I believe in what we do and the service the postal service provides to its customers,” Hensley said.
Due to the growth of the Internet, that service has changed slightly over the past five years. The Yellow Springs post office lost two letter carriers during USPS’s major downsizing between 2009 and 2011, when so much of the nation’s first class mail went online. Online shopping and package delivery has taken up some of the slack, but it hasn’t completely replaced the decline in demand for postal services, nor quelled the private competition. According to a Brookings Institution study published this month, the number of first-class letters the USPS handles each year dropped from 54 billion pieces in 1998 to 22 billion pieces in 2013, due to the use of email and texting in lieu of both personal letters and greeting cards as well as banking and other official business. And while package volume has increased from Internet sales, USPS still lost more than $5 billion in 2014, a pattern representing eight consecutive years of financial losses for the government agency.

In spite of the hit, the Yellow Springs office has remained relatively stable. Instead of eight mail carriers, the village now has six: four city carriers, Herb Morris, Adam Gueth, Heidi Brown and Mike Koon, and two rural carriers, Carla Markley and Kathy Borders. The local office also has two retail clerks, Molly Panstingel (who has been at the local post office for 11 years) and Ron Covington, as well as postal maintenance worker Bill Priest. The Yellow Springs post office handles an average of 12,000 pieces of mail every day, including a steady increase in online package delivery, Hensley said.

“Yellow Springs has a lot of online purchases — a lot of retail ordering — for a small town,” he said, noting that “city-side” alone last Friday 118 packages came through the local facility.

“I’d say one in every five people in Yellow Springs gets a package every day,” he said, instantly ticking off the math.

According to Van Allen of the regional office, though the post office regularly evaluates all of its offices based on volume and financial losses, no changes are currently on the radar for the Yellow Springs or Clifton post offices.